How Much Can Be Read Into Bitcoin Dominance in Such a Bear Market?

Darryn Pollock
Bitcoin may be down in the dumps pricewise, but it is right up there when it comes to market dominance, is there something to read into? 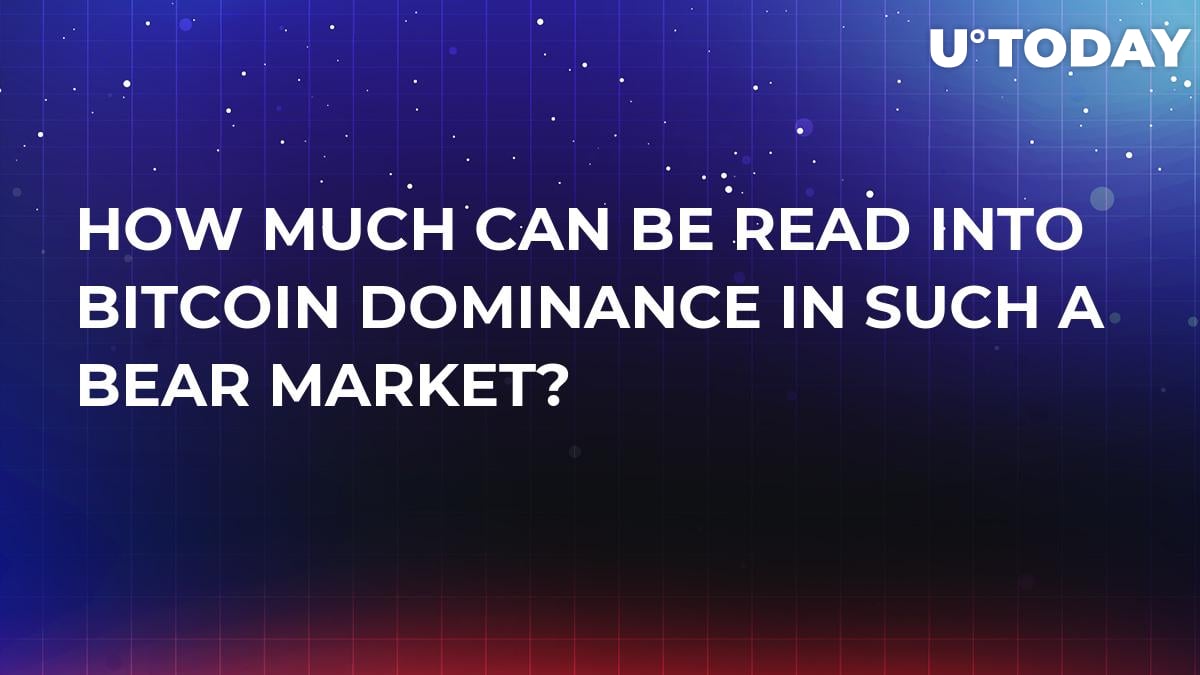 Bitcoin’s market share dominance has now reached 57.8 percent for the first time since Dec. 16, 2017. That was the day before Bitcoin peaked at $20,000. Of course, it is a very different state of affairs in the cryptocurrency market these days.

Bitcoin is in a severe bear market, its price sits around $6,200 and is slowly dropping, yet its overall dominance is still on the rise. In December, the market dominance probably had a lot to do with adoption and hype, whereas this time around, it may have a lot more to do with the woes of altcoins.

Ethereum has been particularly hit hard with its dominance down to around 12 percent. This loss of dominance has also affected the second-biggest cryptocurrency as its price flounders under $175.

However, in the grand scheme of things, could this downfall in dominance from the altcoins out there actually be a blessing in disguise for the Bitcoin market and the cryptocurrency ecosystem?

There are new coins being born every day, many of them scams or poor projects, and a lot of them ultimately end up as failures. However, if the indication is that the money in crypto is filtering towards a proven cryptocurrency like Bitcoin, and away from the hundreds of others, it may be a good reboot to the system.

One aspect of the cryptocurrency space that has emerged and given it a bad rep is the multitude of poor ICOs and cryptocurrencies that often don’t deliver or fail outright. These reached a pinnacle towards the end of last year and made for quite a big ‘altcoins season.’

That is not to say that the dilution of Bitcoin’s dominance meant that money was being poured into bad, or scam, coins, in fact, the majority of the dilution would have still gone towards major coins in the top 10, such as Ethereum.

However, this latest show of dominance from Bitcoin seems to be indicating that the focus in the cryptocurrency market- even if it is diluted- is being aimed squarely at the major cryptocurrency that has proven itself.

What is interesting to compare is the long rivalry that has developed between Bitcoin and Ethereum, despite the two coins being so fundamentally different. They typically have always occupied first and second spot on the market cap, and are the two most well known.

Last year, in June, was Bitcoin’s weakest market position with Ethereum taking 30.63 percent of the market, just under seven percent shy of Bitcoin’s at 37.87 percent.

Since then, Bitcoin has been able to regain market dominance, hitting a high of 65.18 percent in December 2017. Ethereum was at a low there too-  9.71 percent. But, Ethereum was able to close the gap on in February, grabbing 20.46 percent to Bitcoin’s 36.32 percent, as a real altcoin season was in play.

So, with Bitcoin highly dominant, and Ethereum struggling in dominance, but as well as price, what can be read into the situation for the future. Predictors are all out there worrying about the next price rally, but perhaps this is a good situation for the market to shake itself clean.

What about the ICO sell off?

Many are speculating that the dire position Ethereum finds itself in is because ICOs have sold their holding, but in fact, this is not entirely true, and their actions would have minimal effect of Ethereum’s price.

The majority of major Blockchain projects based on Ethereum are still holding tens of millions of dollars in their Ethereum treasury, according to a major research group. However, if that bearish market continues, the sell pressure could be too much and it may trigger a sell off.

Still, as it stands, Ethereum’s own issues are not to do with ICOs selling their assets, but rather it could loop back to the general market sentiment. Bitcoin is still holding strong in other places other than its price, yet other coins are facing a lot more difficulties, and a lot less trust or enthusiasm.

A full shake out

There is no doubting that the scams, false projects, and Blockchain hype led to an ecosystem full of bad options which were fueled by speculation and hype about astronomical growth. But now with the end of hyper growth, and a much more cautious marketplace, perhaps the chaff has been shaken out.