What is Bitcoin (BTC) - Simple Explanation for Beginners

George Shnurenko
As mentioned above, the majority of internet users think that Bitcoin is just another digital currency. 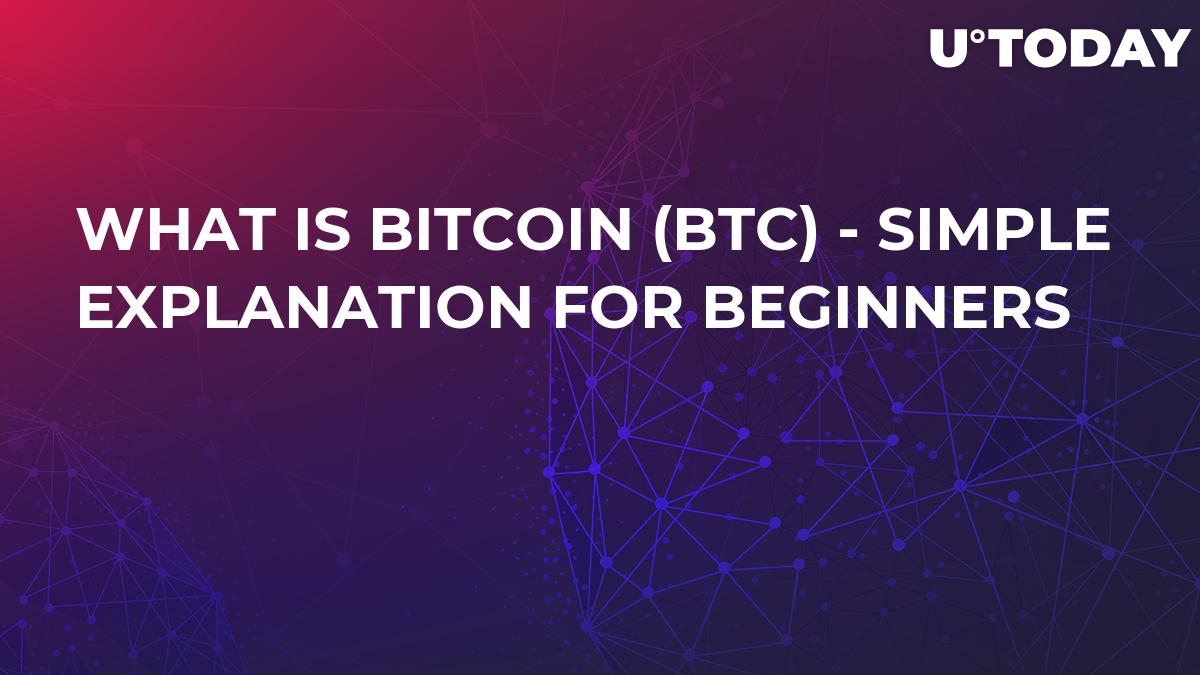 Bitcoin is the major cryptocurrency on the market that poses as an alternative to other forms of digital money. By placing emphasis on decentralization, it allows users to perform transactions cutting out an intermediary. The majority of people simply treat Bitcoin as just another form of digital money, but the historic rise of this cryptocurrency can lead to revolutionary changes in the world of finance. For example, triple-entry bookkeeping (which practically eliminates the possibility of financial fraud by distributing all the entries across the Bitcoin network) could change the way accounting works and potentially make the accountancy profession obsolete.

The founder of Bitcoin

Bitcoin’s white paper was developed by an anonymous person whose pseudonym is Satoshi Nakamoto. The real Satoshi Nakamoto (a 70-year-old man who currently lives in Los Angeles) claims that he doesn’t have anything to do with the creation of Bitcoin despite having extensive experience in engineering.

The new currency appeared in 2008, and it instantly emerged as the rival of centralized payment systems. Up to this day, the real identity of Satoshi Nakamoto remains unknown. He mysteriously disappeared from the Internet on April 23, 2011, stating that he was not interested in the project anymore. He also said that the future of Bitcoin was in “good hands”.

Of course, there were numerous speculations about the real identity of Bitcoin’s founder. In 2016, Australian businessman Craig Wright got huge media coverage after claiming that he was the person behind the creation of Bitcoin. The corroboration of Gavin Andresen, the initial Bitcoin’s developer, further fueled the public’s attention. However, many took these revelations with a grain of salt accusing Wright of faking his proof. Furthermore, he is now being sued for fraudulent activities that involve stealing $5 billion in crypto. At the same time, the linguistic research suggests that Nick Szabo might be behind the creation of Bitcoin given the fact that he has the same writing style as Satoshi.

It is remarkable that the net worth of the elusive creator (whoever this person might be) is estimated to be around 20 billion dollars. That puts him in the top 50 of the richest people in the world). All in all, there are at least 40 Bitcoin billionaires, but no one can say the exact number because these people want to remain unknown to avoid being persistently targeted by hackers.

As mentioned above, the majority of internet users think that Bitcoin is just another digital currency. This cryptocurrency can be used as ordinal fiat money for online transactions, but at the same time, there are some major differences that single out Bitcoin among other means of payment.

You can carry out any transaction that involves Bitcoins irrespectively of time or geographical location. Users are the ones who administer over their own money. There is no need to cooperate with a bank or sign contracts in order to get a credit card. This lack of dependence could potentially lead to a competition between cryptocurrencies and traditional banking institutions.

There is no need to pay any fees when Bitcoins are deposited onto your account. If you want to send money or simply purchase something on the Internet, you have to pay transaction fees. Bitcoin is often criticized for its high transaction fees (especially, taking into consideration the fact that alternative cryptos have significantly smaller fees). On the other hand, you are able to accelerate the confirmation time if you pay more.

Moreover, there is no direct correlation between the amount of fee that you pay and the sum of money that you want to transfer (you may be only charged only a couple of Bitcoins for transferring astronomical sums of money). Bitcoin owners can find numerous merchant solutions that allow directly converting crypto into your local currency at a fairly low cost avoiding credit card fees.

Bitcoin network is characterized by appreciation of security in cryptography and anonymity. Furthermore, crypto transactions cannot be reversed. Thus, merchants are not endangered by the risk of financial frauds while at the same time they are not expected to comply with PCI Security Standards.

Merchants are also able to reach out to other markets where conventional payment methods are not accessible. For users, the main benefit of using Bitcoin network is the protection of their privacy – there is no way someone can leak personal information about parties that were involved in a certain transaction.

Any transaction conducted within the Bitcoin blockchain can be verified by any member at any time. Unlike banks (where a single governing body can preside over the whole system), there is no place for centralized governance in the Bitcoin network. Such an approach helps to ensure transparency and predictability of transactions.

The Problem of Recognition

Despite the booming growth in 2017 and the following insistent media coverage, a lot of people are still unaware of Bitcoin’s existence or simply not interested in the cryptocurrency world. The future of Bitcoin still greatly depends on governmental bodies and central banks. For instance, U.S. Securities and Exchange Commission is already planning to impose a number of regulations on Bitcoin (the same goes for other cryptocurrencies). More counties are expected to follow the lead. There are even countries like Macedonia and Vietnam where Bitcoin remains illegal. Furthermore, such a huge cryptocurrency market like China shut down all Bitcoin exchanges back in 2017 and eventually banned Bitcoin in 2018. Will more countries follow the lead?

Another problem that Bitcoin is facing right now is that many businesses still refuse to accept it as an eligible payment method. Companies have to realize the major advantages of working with cryptocurrency that are rapidly revolutionizing the financial world.

Bitcoin still remains attractive to criminals despite the facts that there are other cryptocurrencies that offer more privacy features. This cryptocurrency is still associated with the dark web economy (particularly, with Silk Road, the infamous platform for selling drugs which adopted Bitcoin as its major currency). While the US still remains Bitcoin-friendly, it’s only a matter of time till the governments across the globe start imposing strict regulations due to the criminal activities involving Bitcoins. Some experts predict that the government’s intervention will mark the death of digital currencies.

The Instability of Bitcoin’s Value

After Bitcoin’s prices had plunged in January, many critics started to question its credibility and calling it yet another Ponzi scheme. And there is indeed a shred of truth in their words since Bitcoin is extremely volatile. Even non-significant business events could cause another free-fall. On the other hand, one should understand that Bitcoin is a young currency, so it is naturally unstable. If the network continues to grow, its volatility is expected to decrease. As of now, it is extremely hard to predict the future of Bitcoin.


Related
When Is Bitcoin Dead, and When Is It Just a Bubble?

The Bitcoin network is undergoing constant changes that are aimed at improving its security and increasing its usability. The majority of newly designed features haven’t been fully implemented yet. It is safe to say that Bitcoin is still a long way from becoming a fully developed system.