Darryn Pollock
The latest big dip in Bitcoin’s price is being wrongly heralded as the final bubble pop, when in fact, its decline from nearly $20,000 to now is not even its biggest 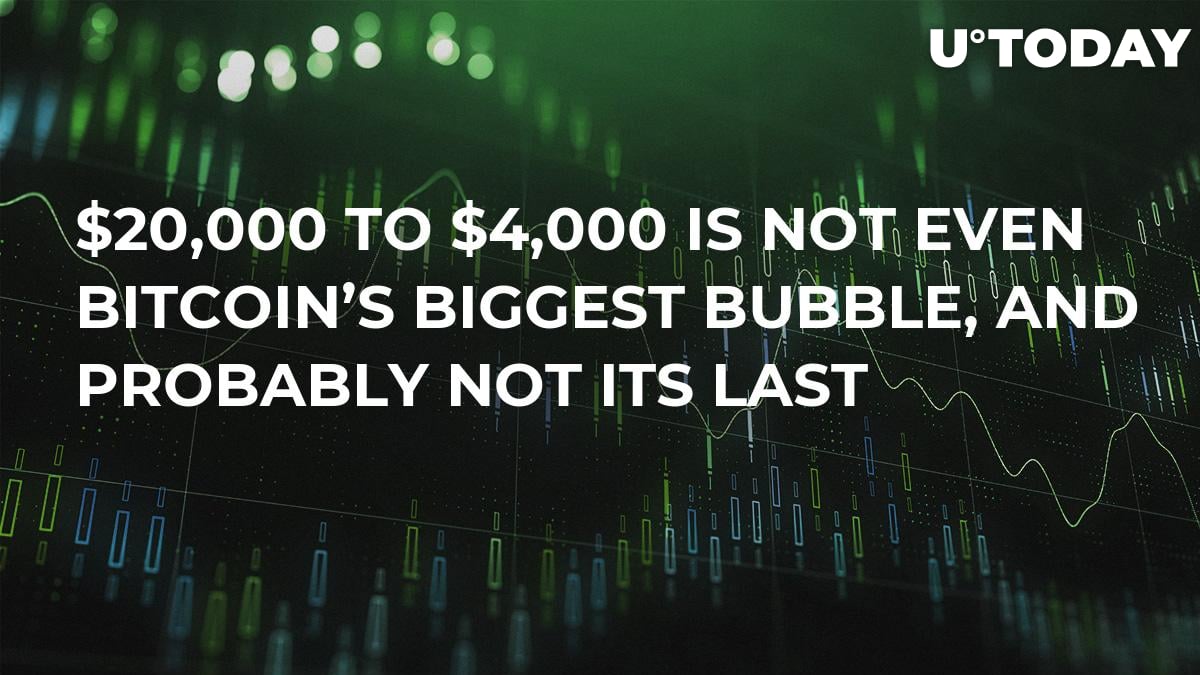 Bitcoin, having slowly declined to around the mid $6,000 mark from it’s all time high of about $20,000 in December last year, suddenly fell dramatically to worrying numbers of closer to $4,000 this past week. Many have panicked and proclaimed that this is the end of Bitcoin, and that the bubble has popped.

However, the Bitcoin price slump is only making major headlines because of its recent dalliance with the mainstream media, since about June of 2017. This so-called bubble pop is not even Bitcoin’s biggest fall, but it is certainly its most popular.

Not many people have been involved in Bitcoin for the majority of its history, and thus the collective memory of the 2011 bubble, or even the long lasting bear market of 2013 to 2015, is sorely lacking in these times of uncertainty and fear.

However, if these rises and falls were to be ranked, the fall from the all time high to today only ranks as Bitcoin’s fourth worst bubble.

Looking back at the bad

The three other big bubbles in Bitcoin's history have seen as much as 94 percent of its value wiped out.

From June to November in 2011, the price of Bitcoin was at a high of $31 but fell dramatically in less than six months to around $2, showing a fall of 94 percent. The recovery period for this collapse, and for Bitcoin to reach a new high of over $31, was just over 1.5 years.

The next big bubble saw Bitcoin go from $259 to a low of $45, and this fall only took two months towards the end of 2014 — an 83 percent fall in value. However, Bitcoin bounced back to over take its $259 mark in just seven months.

From there, Bitcoin quickly spiked up again to $1,141, but its fall into a bear market lasted almost two years as the price bottomed out at this time at $152 — an 87 percent fall. This recovery took over three years to get right, pushing Bitcoin all the way to its $20,000 mark.

Bitcoin is not even the worst stock

So, while the cryptocurrency has had four big falls in value, ranging from 80 to 94 percent, so have a lot of major companies that are hugely successful household names today.

Companies such as Amazon have felt loses as big as almost 99 percent; in fact, all the ones he tweeted about lost over 96 percent of their value in the Dot Com bubble burst of the 2000s.

The real takeaway from this latest publicised collapse in price is that the mainstream media is really only aware and cognisant of what has happened to Bitcoin since June of last year, when they started taking note.