Patrick Thompson
Craig Wright – the man who claimed to be Satoshi Nakamoto back in 2015 and even provided evidence for the claim – has been sued for over $10 billion. 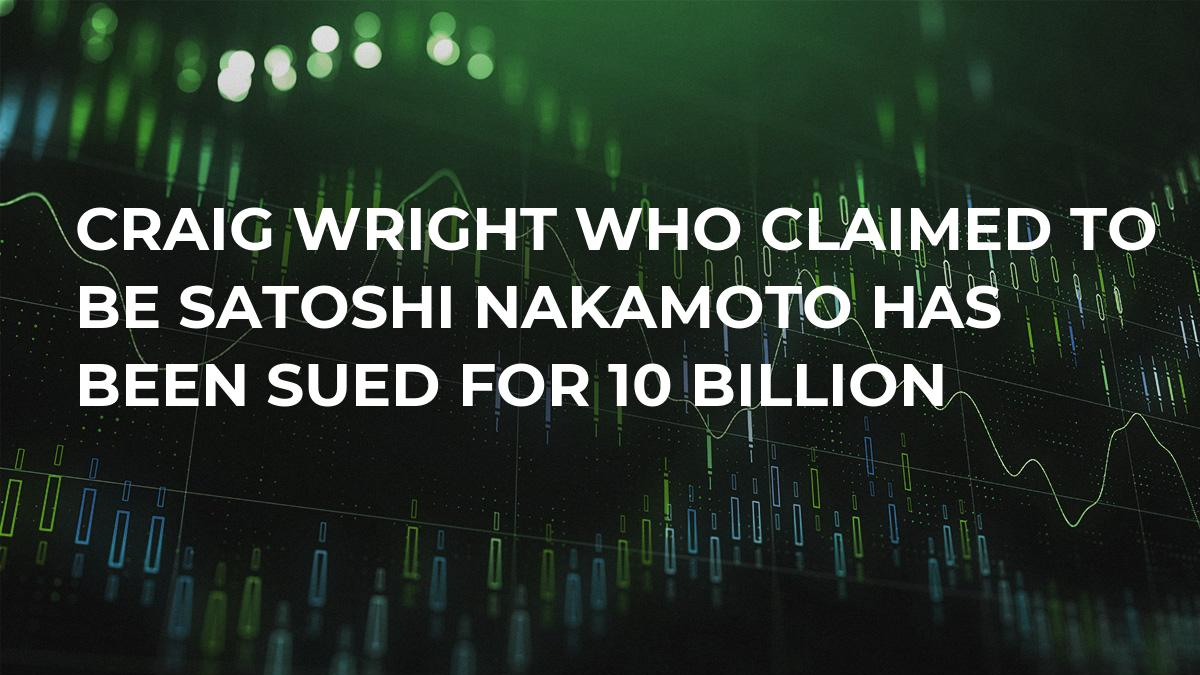 Dr. Craig Wright – the man who claimed to be Satoshi Nakamoto – has found himself in the crosshairs of a lawsuit worth over $10 bln. Ira Kleiman has filed a lawsuit on behalf of his late brother Dave Kleiman against Wright. A 2015 report from Gizmodo stated that the documents Gizmodo had gathered on Dave Kleiman included a draft of a contract created in 2011 in which Wright entrusts 1.1 mln Bitcoin to Kleiman, however, the contract stated that the money was to be returned to Wright sometime in the future.

However, Ira Kleiman is arguing that the terms of the contract have been manipulated. Kleiman argues that Wright forged Dave Kleiman’s signature and backdated the contracts between Kleiman and Wright so that Wright could deceptively obtain access to the 1.1 million Bitcoin that are now worth $11,440,000,000. In addition to the complaint filed for forging the contracts, Kleiman claims that Wright also infringed upon Dave Kleiman’s intellectual property associated with Bitcoin.

It is no secret that both Craig Wright and Dave Kleiman were early developers on the Bitcoin Project, however, it is not clear whose intellectual property is placed where in regards to the Bitcoin project. Gizmodo reports obtaining an email from Craig Wright to Dave Kleiman in which Wright requests Kleiman’s assistance editing a paper for a new currency wright was creating,

I need your help editing a paper I am going to release later this year. I have been working on a new form of electronic money. Bit cash, Bitcoin... You are always there for me Dave. I want you to be a part of it all.

Evidence like the dialogue above provided a reason for the crypto community to believe that Craig Wright was Satoshi Nakamoto. As early as December 2015 there were claims that Wright was actually Satoshi. Gavin Andresen - an early Lead Developer of Bitcoin and one of the founders of the Bitcoin Foundation –  even provided support for the claim that Craig Wright is Satoshi Nakamoto. Andresen says that in a private meeting with Wright in London, Wright signed a message to Gavin with a private key from the first block ever mined on the Bitcoin network – a task that only Nakamoto himself would be able to do since Nakamoto should be the only one to possess this private key. However, this feat caused some to claim the whole ordeal was a hoax. Individuals stated that the task that Wright pulled off with the private keys does not prove anything. The negative pushback to the claim that Wright was Nakamoto caused Wright to eventually give up trying to prove the claim. On may 16, 2016, Wright posted on his website,

I believed that I could do this. I believed that I could put the years of anonymity and hiding behind me. But, as the events of this week unfolded and I prepared to publish the proof of access to the earliest keys, I broke. I do not have the courage. I cannot. When the rumors began, my qualifications and character were attacked. When those allegations were proven false, new allegations have already begun. I know now that I am not strong enough for this. I know that this weakness will cause great damage to those that have supported me, and particularly to Jon Matonis and Gavin Andresen. I can only hope that their honor and credibility is not irreparably tainted by my actions. They were not deceived, but I know that the world will never believe that now. I can only say I’m sorry. And goodbye

Since then, Wright has given up trying to proof that he is Nakamoto. When Wright was questioned about the lawsuit by twitter user BrianGamblin, Wright replied that his prosecutors were doing this out of greed.