When Is Bitcoin Dead, and When Is It Just a Bubble?

Darryn Pollock
Speculators are declaring Bitcoin to be dead and that the market will soon fall to zero. Bitcoin’s bubble may have popped, but that’s different to being dead 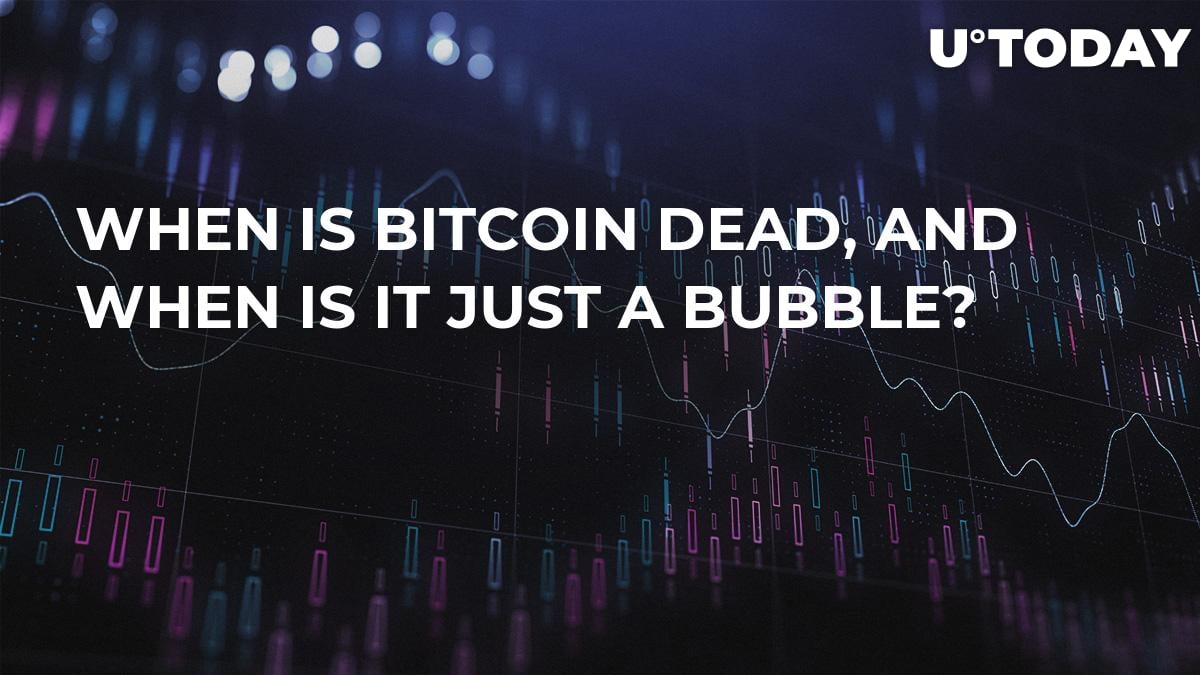 Having fought tooth and nail to state that Bitcoin was never a bubble, and was never going to act like a bubble as the price of the asset shot up spectacularly based around pure speculation, it has come time to concede. Bitcoin’s pattern has all the signs of a classic bubble.

However, the naysayers of the cryptocurrency space are not content with calling Bitcoin a mere bubble: they are now declaring that the digital currency is going to die, and the market will soon be going to zero.

While the latter end of an asset investment bubble has all the makings of what would appear like the death of a market, as it rushes down to newer and newer lows, there is a big difference between a bubble pop and a dead market.

Bitcoin has many attributes that prove that this move from $20,000 to $3,000 in almost precisely a year is a bubble, and even more evidence to suggest this is not the end of the cryptocurrency. When it comes to Bitcoin, there are other factors to consider, such as mining and death spirals, as well as interest in the technology underlying it.

But as it stands, the movement of this price bubble seems to be bottoming out with a future still very much on the cards. What that future will be is impossible to tell, but the evidence is that there is future planning.

With most asset markets, there is certain specific ways in which the market can die, such as oversupply of an asset, or a loss of demand. In the case of Bitcoin, there is the ever present threat that many like to laud over: that of the death spiral.

“Some people assume that if [death spiral] happens, then a lot of miners will say ‘okay, I’m not making enough profits anymore because the hash rate has dropped 50 percent, so I’m going to turn off my mining’ which then causes to drop even further, which causes it to get even slower, which causes to drop even further, drop slower, death spiral, difficulty never adjusts,” says Antonopoulos.

However, this is unrealistic as according to him, “miners have a much more long-term perspective.”

Bitcoin is designed in a way that if there is a drop in hash, there is also a drop in difficulty, and for many miners, it is not about calling it quits as soon as things go pear-shaped, but it is rather about riding out the storm as there will always be another chance to be profitable again.

Another consideration to take into account is that even with the price dropping, people are viewing the Bitcoin market as a buyer's opportunity. Many feel that because the bubble has popped, this is the perfect, non-speculative time to enter in and buy up Bitcoin as a store of value.

#BTC is getting to such low levels that it’s becoming one of the best buying opportunities of the year. As a store of value, #Bitcoin is here to stay. We truly think it’s the least speculative investment a person can make in #crypto right now.

More so, with the market for Bitcoin being down and losing steam, there has been more room for a focus on the underlying technology, blockchain. Blockchain’s worth has never been questioned, and because of that, many feel that its link to cryptocurrency will help it keep going.

The latest report, titled “2nd Global Crypto-Asset Benchmarking Study by the University of Cambridge”, explained that this is a ‘delay’ rather than a death.

“The speculation of the death of the market and ecosystem has been greatly exaggerated, and so it seems likely that the future expansion plans of industry participants will, at most, be delayed.”

“Total user accounts at service providers now exceed 139 million with at least 35 million identity-verified users, the latter growing nearly 4X in 2017, but most remains passive. Additionally, individuals constitute the largest share of the user base.”

“When it comes to mining, the majority of identified mining facilities use some share of renewable energy sources as part of their energy mix and mining is less concentrated than commonly perceived. China remains in the top-3 countries to host mining farms while the USA and Canada are seeing rapid growth.”