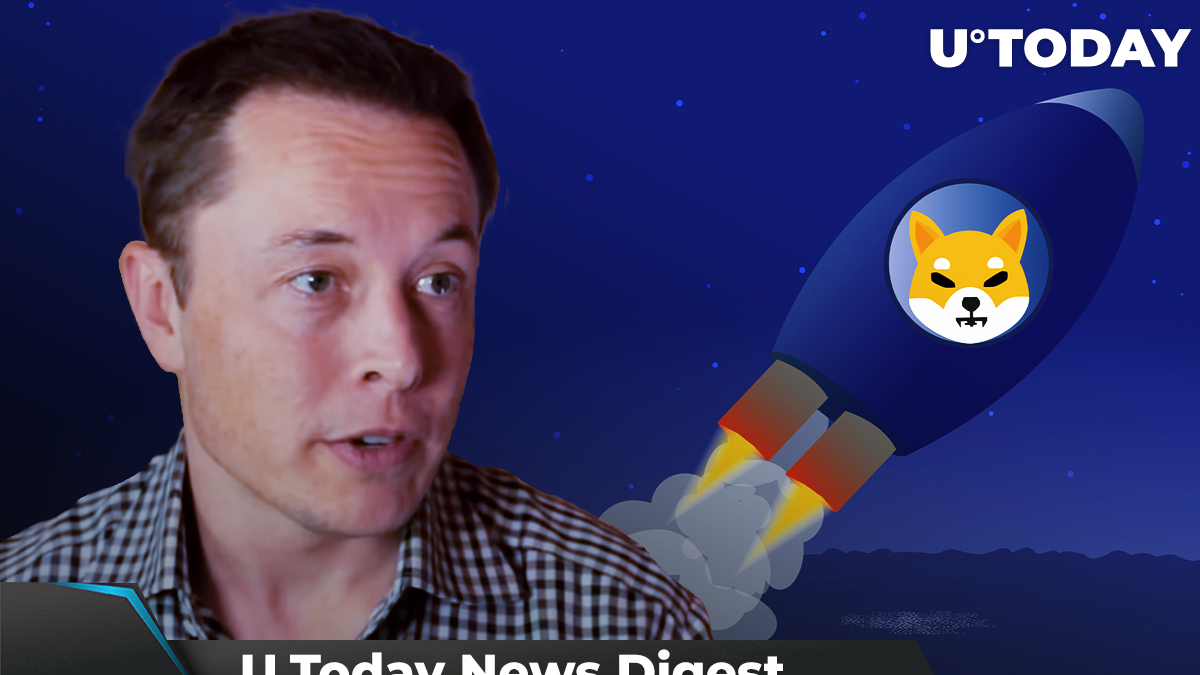 U.Today has prepared the key news stories over the past day. Delve into the world of crypto news with our news digest!

Tesla CEO Elon Musk has proven that he is still capable of pumping meme coins. Yesterday, the billionaire posted a tweet in which he “drew” a Shiba Inu dog with a soaring rocket, making SHIB rise by almost 15%. In addition to this, Santiment reported a recent rise in the number of SHIB transactions worth $100,000. According to the company’s experts, these large transfers coming in bunches usually make the coin’s price go up.

Binance destroys $639 million worth of BNB

Binance has completed its 17th quarterly burn, destroying more than 1.3 million BNB tokens, which equals roughly $639 million. So far, this has been the biggest quarterly burn in dollar terms. Binance is on track to destroy 50% of all BNB tokens every quarter. The number of tokens that are destroyed each quarter is calculated based on the trading volume on Binance's crypto-to-crypto exchange.

After a 75-day review by the SEC, ProShares will finally launch the first long-expected Bitcoin futures ETF with the ticker BITO today, Oct. 19. The news that the ETF might be approved was published last week and, only yesterday, it was confirmed by The New York Times. The ETF will trade on the New York Stock Exchange.

Yesterday, a post by a “First Squawk” Twitter account stirred up Shiba Inu token fans. According to the post, the long-awaited listing of SHIB by Robinhood has finally been confirmed, which made the meme cryptocurrency’s price spike over 8% in minutes. However, Robinhood has quickly put an end to the rally by debunking the news. This is not the first time the account in question has spread false rumors; in February, it posted a tweet about Musk being investigated by the SEC over his Dogecoin tweets.

Meanwhile, SHIB fans continue signing the Change.org petition to list the "Dogecoin killer"; at the moment, they are only 50,000 signatures away from achieving their goal.

Famous entrepreneur Elon Musk has supported fellow billionaire Mark Cuban in a recent debate with Bitcoin maximalists; he posted a laughing emoji in response to a tweet that praises the “Shark Tank” host for defending Dogecoin. Previously, when speaking to podcaster Preston Pysh on Twitter’s “Spaces,” Cuban said that will continue talking about Dogecoin despite facing pushback from Bitcoin maximalists.

Pysh then responded to Musk by posting a chart that demonstrates Dogecoin’s poor performance in comparison to Bitcoin since the billionaire’s hosting debut on “Saturday Night Live.”