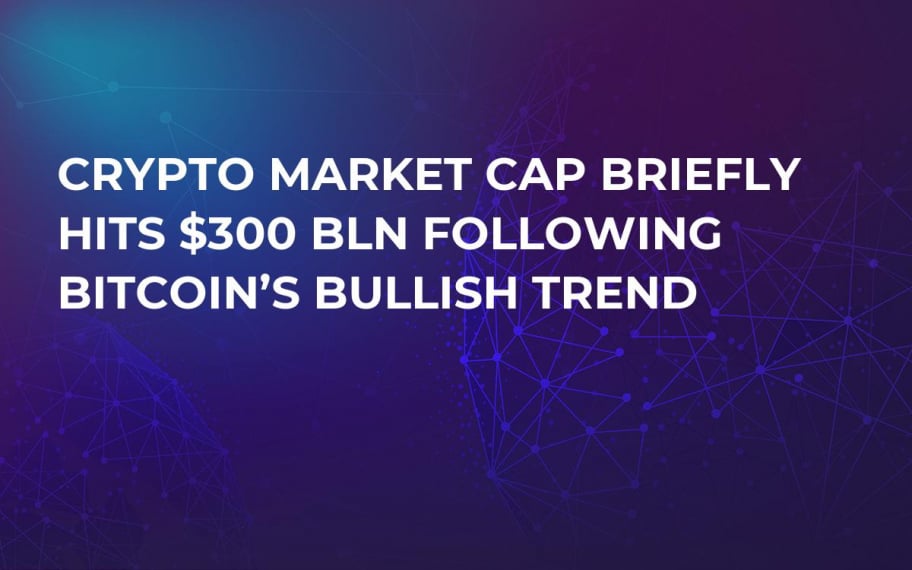 The cryptocurrency market has hit an important milestone following Bitcoin’s (BTC) sudden surge. Bitcoin along with other altcoins that were affected by its bullish trend collectively increased the market cap up to $300 bln. This the highest point in more than a month while the current $295 bln at the time of writing this article.

The substantial increase in market capitalization is obviously the result of Bitcoin’s shocking 10 percent spike. Some experts refrained from making optimistic predictions and consider it a fluke explaining that caused by short sellers covering were massively buying Bitcoin in order to cover their losses. However, there are also substantial reasons to believe that this bullish trend will continue in the future, since this week’s news cycle was dominated by new regulatory efforts, BlackRock’s tentative crypto foray and new Coinbase listings. Investors regained interest in crypto which made Bitcoin’s value to skyrocket up to the $7,500 mark.

As mentioned above, Bitcoin wasn’t the only cryptocurrency that experienced huge gains– many altcoins also followed the suit. Ethereum (ETH) increased its value by six percent while Ripple price (XRP), its closest competitor, jumped by nine percent. Stellar (XLM) turned out to be the biggest gainer of that day as it value rose by whopping 28.4 percent.

Bitcoin, while dominating almost 85 percent of the market back in March 2017, is currently sitting at 43.1 percent. While it’s far from January’s all-time low (36.1), the fall of Bitcoin’s supremacy shows that investors are keen on different alternative cryptocurrencies.

Stemming from the fact that the crypto market is extremely volatile, it is rather hard to make long-term predictions. However, there seems to be a consensus among many experts the market cap may double or triple its value in the nearest future. Simone Brunozzi goes as far as predicting $4 tln figure by 2020 while Pantera Capital’s doesn’t rule out the possibility that one day the whole industry will be worth more than $40 tln if the long-awaited blockchain takeover does happen.