Bitcoin Volumes Down as Price Keeps Falling, Ethereum Classic Up While IOTA and Ripple Suffer Most 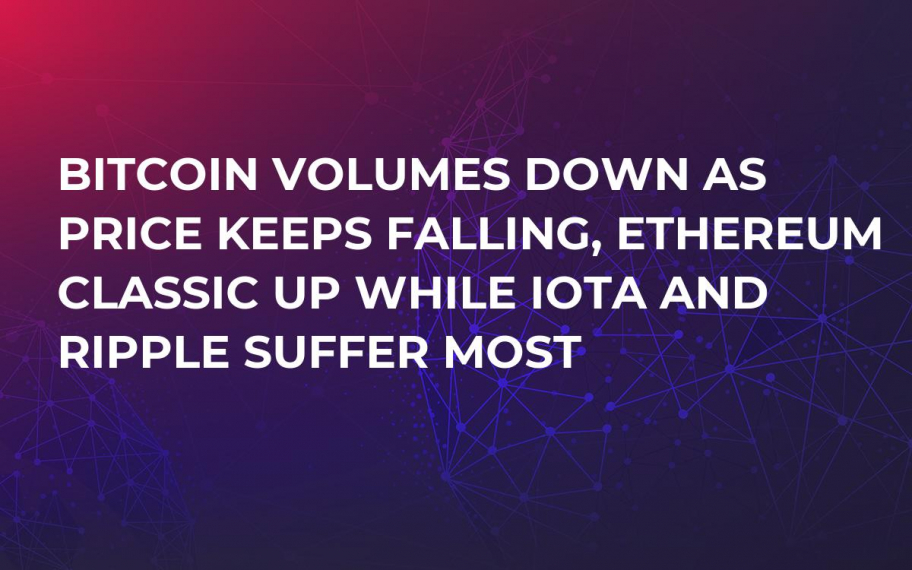 Bitcoin’s continued price fall may not be over as the original cryptocurrency hovers just below the $7,000 mark. The price of the coin has gone down from its recent high of $8,4000, but what is more concerning is the loss of volume.

In the altcoin markets, things are in a much bigger state of flux with a number of coins breaking the mold and going into the green, such as Ethereum Classic, but there are a number of bigger coins feeling big losses over the last 24 hours, including IOTA and Ripple.

With this latest fall, many are hoping that a bullish sentiment will take over again and an upward correction will take place, however, a deeper look into the volume of transactions seems to indicate that won’t be happening soon.

In the past 24 hours, the volume of Bitcoin has not improved, in fact, it has been in decline sitting in at the $3.8 bln. This indicates that the overall demand for Bitcoin is down and it will no doubt affect the price further.

The volume needs to pick up in order for the price to pick up due to simple supply and demand, and if it does not, there is a chance that Bitcoin could head towards $6,000.

Bad news for IOTA and Ripple

While Bitcoin’s price continues to dip, although only a part of a percentage over the last 24 hours, other major coins have taken big hits. Ripple is down as much as five percent after seeing some growth in its presence after announcing partnerships with Bill Clinton and a nod towards Madonna’s charity.

Ripple is down five percent over the last 24 hours having plunged from $0.44 to $0.40 since the weekend. However, it is IOTA that is the biggest loser of the day, dropping a whopping 13 percent in a steep fall.

On the green side of things

Elsewhere, there is positive movements for coins such as Ethereum Classic which is up seven percent in the last 24 hours have shown steady growth since Friday. Ethereum Classic has gone from $14 to $20 in under five days ever since the announcement it would be appearing on Coinbase.