Bitcoin Price Bounces Below $8,000 and Back Up, Altcoins Struggle to Keep Up

Darryn Pollock
Bitcoin has shown its resistance in bouncing back quickly from a drop below $8,000, but for altcoins, this quick bounce has left many of them reeling 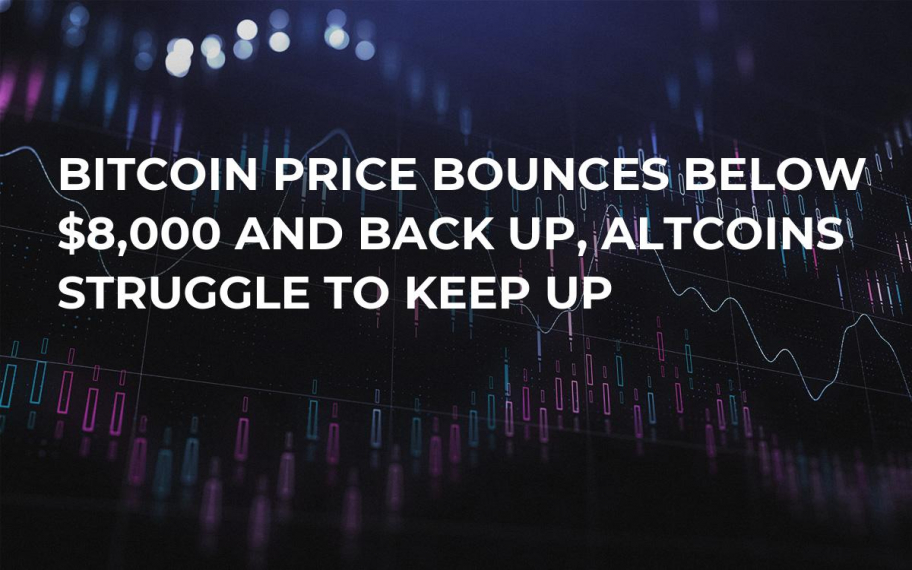 Bitcoin showed that the current market conditions are well and truly in its favor as a drop below $8,000 was quickly corrected with the digital currency bouncing back to the same price as before. However, the altcoins in its wake, usually mirroring Bitcoin struggled to keep up as they reported big losses.

Bitcoin still sits in and around $8,200, barely feeling a drop, but the rest of the top 10 coins have all fallen between two and nine percent with Cardano losing the most momentum.

On the other side of things, there is a big boost for Tokenized securities Blockchain project Polymath which surged as much as 40 percent on the news of a Binance listing.

Bitcoin’s credentials as the king of cryptocurrency have taken a different edge in this latest rally as, instead of being the head of the entire market’s snake, it is showing tendencies of breaking away and forging its own path.

The latest breakaway has seen Bitcoin drop sharply below $8,000 to an old resistance point of $7,200. However, it took a matter of hours for the cryptocurrency to get back to its original position continuing its general sideways movement.

The result of this move by Bitcoin has caught other coins well off guard. Some of the next biggest coins have not bounced back at all from the overnight drop felt across the markets.

Ethereum, Ripple and Bitcoin Cash are all down around three percent, however, EOS, a $7 bln Blockchain protocol backed by billionaire investors such as Peter Thiel and Mike Novogratz, has fallen by more than seven percent over the past 24 hours.

Cardano is down even more, around nine percent, as it carries on a general downtrend for the past seven days. Cardano has lost more than half its value since a spike in early May got it to $0.37; it now sits at $0.14.

Eyes on the market

People’s interest in Bitcoin and the rest of the market's movements are heightened at the moment with the anticipation of potential cryptocurrency ETFs swirling. Cryptocurrencies are becoming more accessible and more normalized and as such, the markets are reacting positively.