Bitcoin Obituaries Keep Rising But Why Is Bitcoin Still Not Dead?

Darryn Pollock
Bitcoin has been pronounced dead multiple times in its 10-year life; its recent fall brought about another obituary, but why is it that Bitcoin is NOT dead? 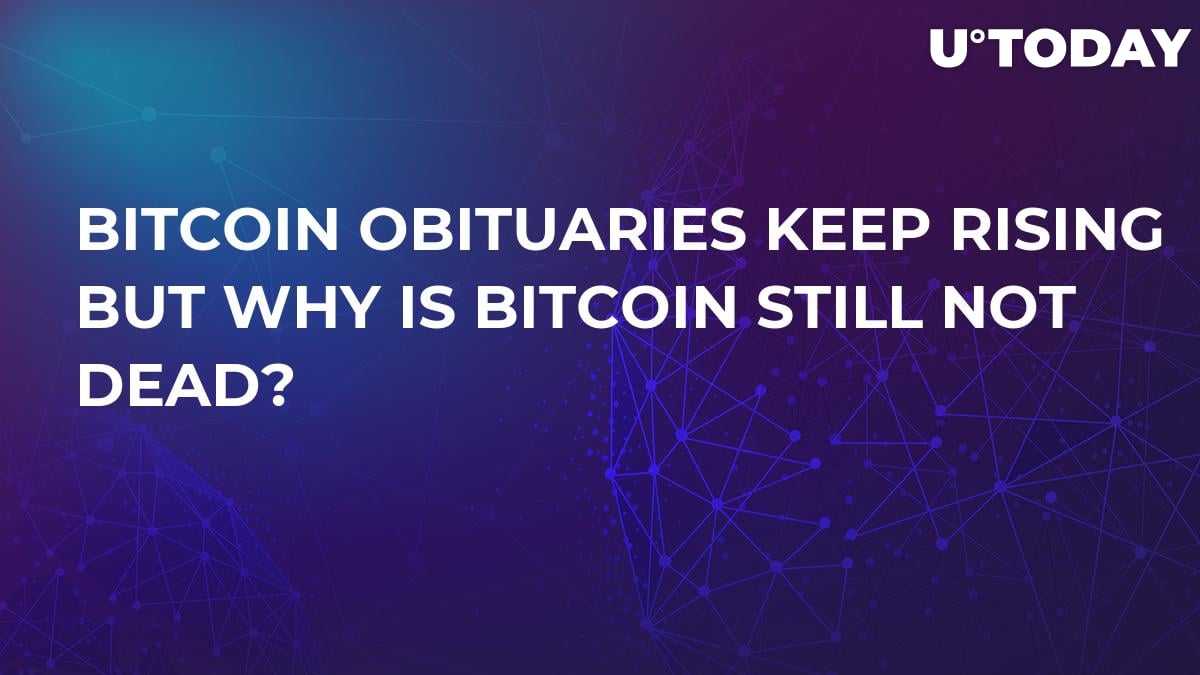 A popular site called 99Bitcoins keeps a close eye on the number of times that Bitcoin has been declared dead in the mainstream media. Currently, it has accrued 336 obituaries for the digital currency.

The latest drop in the price of Bitcoin, which took it from the mid-$6,000 mark down to near on $3,000, sparked fresh panic and capitulation as many believed that the cryptocurrency had had its last days.

There were concerns over its utility and usefulness, as well as the potential for a so-called death spiral in the mining of Bitcoin as many miners shut up shop. Yet, Bitcoin continues to exist, and at time of writing, has bounced back to over $4,000.

So what is it that is keeping Bitcoin alive? It has no CEO, no company headquarters, and because of its decentralised nature, has no one to drive it to keep it alive; it relies solely on those who are interested in it.

Bitcoin, or cryptocurrencies in general, have a very special relationship to their underlying technology, blockchain. They are of course dependent on each other to operate, but they also move independently of each other in many respects.

Blockchain is advancing in a very different path to that of Bitcoin, but it was Bitcoin’s initial explosion in the mainstream financial space that made people take blockchain seriously.

Now that the cryptocurrency bubble has essentially burst, there is a lot less hype and interest in it. However, blockchain, the technology behind it all, is getting a chance to come out and shine for its technological reasons alone.

Related
The Blockchain Market Continues to Expand: Predictions for the Near Future

For this reason, Bitcoin is still very much relevant. Blockchain progression is building steadily, and solidly, and because of its adoption across all centres, people still appreciate the usefulness of a digital token.

Bitcoin, as the major digital token that encapsulates all the main points of cryptocurrency and blockchain — such as decentralisation and transparency, and of course distribution — is the epitome of a functioning token economy.

Another reason why Bitcoin hasn’t totally capitulated is because of its built in mining difficulty adjustment. Many people feared that Bitcoin could go under if the miners, an important part of any proof-of-work cryptocurrency, decided to abandon Bitcoin because of the increased difficulty and the loss of profitability.

Indeed, when the price dropped significantly in November, many miners did shut down and the hash rate also fell. But, because Bitcoin has a built in adjustment, the lower hash rate caused the mining difficulty to increase, and thus caused profitability to increase again, enticing miners back.

With more miners mining, there was increased health and activity on the blockchain, which leads to better interest and investment in the markets. This, in turn and in a compound way, then helps boost the price and drive more miners back in, again increasing profit and price.

There is also a big difference between a burst speculative bubble and the death of a market. Some markets can be destroyed by the bubble pop, but in the case of Bitcoin, it is mirroring the dot com bubble because it has a similar nature.

With its underlying blockchain equitable to the internet, and the ICO hype and other factors equitable to Dot Com companies, one can see that this type of burst bubble is a chance for Bitcoin to shed its foolish speculative investors, and allow for those who are serious and successful to rebuild the market based on the important technology underneath.

Bitcoin will continue to be called dead, and erroneously so because it has only hit the mainstream in the last 18 months or so.

However, if one is to zoom out a bit, one would see that an investor who bought Bitcoin two years ago rather than, say, one year ago, would still be over 300 percent up on their investment.