Despite the Criticism, Ripple Arguably More Decentralised Than Bitcoin

Darryn Pollock
Many won’t even class XRP as crypto because of Ripple’s control, but they could also argue that the XRP token is more decentralised than BTC 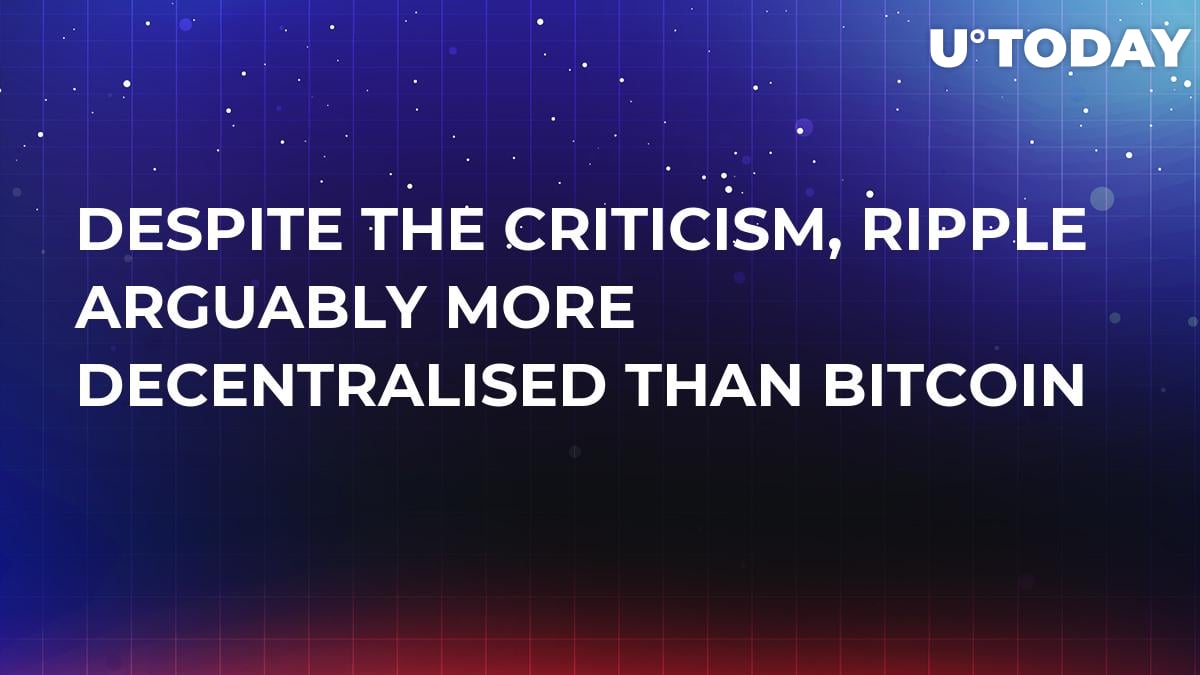 Ripple, and its token, XRP, have faced a constant barrage of criticism relating to their decentralization of the token over the years. Many cryptocurrency purists have criticised their inner workings with Ripple, the company, clearly in charge of the XRP token and its distribution.

However, this allegation has been as equally denied by the those at the head of Ripple; in fact, it has even seen the CEO, Brad Garlinghouse, state that the XRP ledger is in fact more decentralized than both Bitcoin and Ethereum.

This statement alone will get many raring for a fight, but a closer inspection and interpretation of what it means to be decentralised could indicate that Ripple has a point. They could indeed argue that they are more decentralized than the other two major cryptocurrencies, based on the mining pools.

It is well known that controlling the majority of the mining of traditional proof-of-work coins, like Bitcoin and Ethereum, can lead to a 51% attack, which destroys the decentralisation of the blockchain and hands full control to one person, or group, or pool.

Bitcoin has been flirting with the 51% attack recently, and previously, but for Ripple, it is a different story, as they only have seven percent control of the validators. Looking at the interpretation of decentralisation, there technically have been more chances for Bitcoin to be controlled by one group than there has Ripple – so is it less decentralised?

To be honest, the idea of decentralisation is really up for debate, and it is also dependant on interpretation, thus the claims being made on their side of these fence are debatable, but it is interesting to hear the thoughts of Garlinghouse.

“It is very clear that the XRP ledger is decentralized,” said the CEO of Ripple. “Ripple runs seven validators, which is about four percent of all public validators.”

“By almost any measures now, the XRP Ledger is more decentralized than the Bitcoin ledger or Ethereum ledger, where you have a very small number of miners controlling you know well past 50% of mining power.”

It is true that Bitcoin’s mining has almost been monopolised in the past by the likes of Antpool, BTC.com, and ViaBTC, with Bitmain at times having the power to launch a 51 percent attack, but never acting on this. However, it shows just how much the mining has been centralised in Bitcoin.

If one was to base the mining and validation of cryptocurrencies as the key determining factor of their centralisation, then it would be preposterous to say that Bitcoin is decentralized.

Ripple, the company, despite having control in different areas of the XRP token, only controls seven percent of its validation. Thus, on this basis, they have very little control and it should be argued that XRP is decentralised. 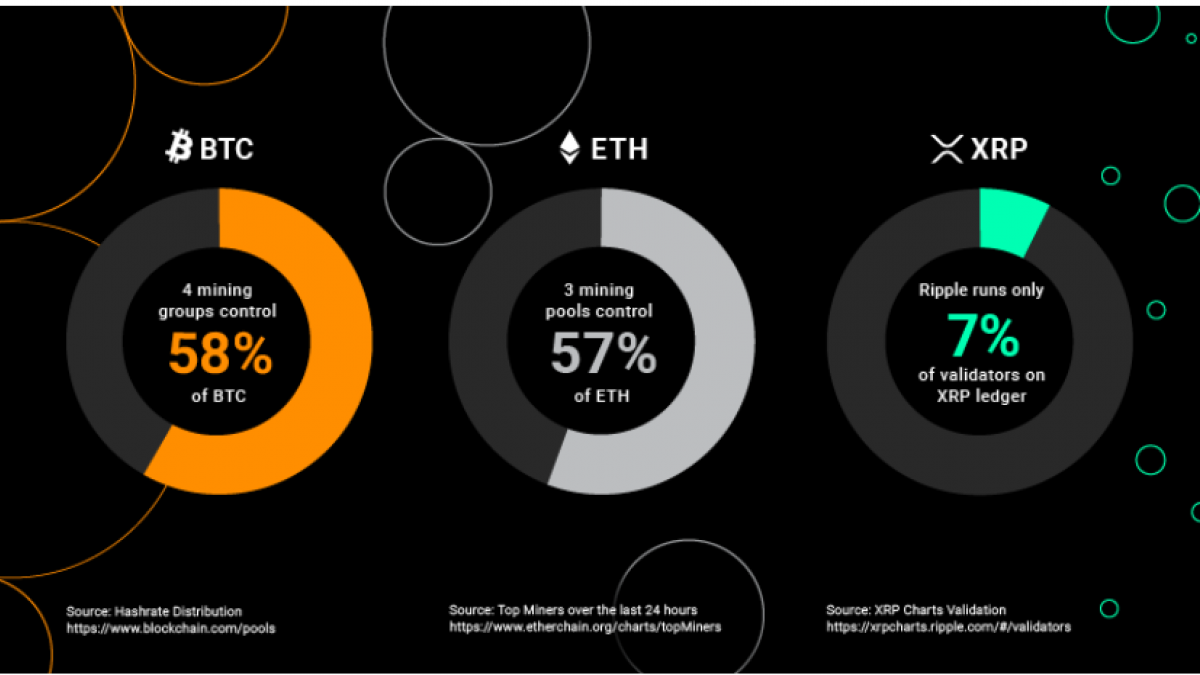 A lot of this argument is also predicated on the algorithms that these two coins use, however.

Bitcoin and Ethereum use proof-of-work algorithms. This system rewards miners for validating transactions by paying a fee for their work. This was a great starting point for a decentralized system that incentivizes complete strangers to contribute to the greater good of a network and make forward progress.

But as time has gone on, clear limitations have manifested. Blockchains that use proof-of-work can be subject to centralized control, where a few miners have significant control over the system.

The XRP Ledger uses a consensus protocol that relies on a majority of validators to record and verify transactions without incentivizing any one party. Validators are different from miners because they aren’t paid when they order and validate transactions.

Today, these validators operate at locations across the globe and are run by a broad range of individuals, institutions, asset exchanges and more.

As mentioned, this form of argument in regards to decentralisation only takes into consideration one aspect. But in this aspect, indeed, Ripple is superior. However, when it comes to purists and believers in how blockchains should operate, many have an issue with a company having discretion over tokens.

Ripple has been a coin that differs substantially from most of the top 20 coins by market cap – that does not necessarily mean it is wrong, nor right, but it is certainly showing that things can be done in different ways in the blockchain space.