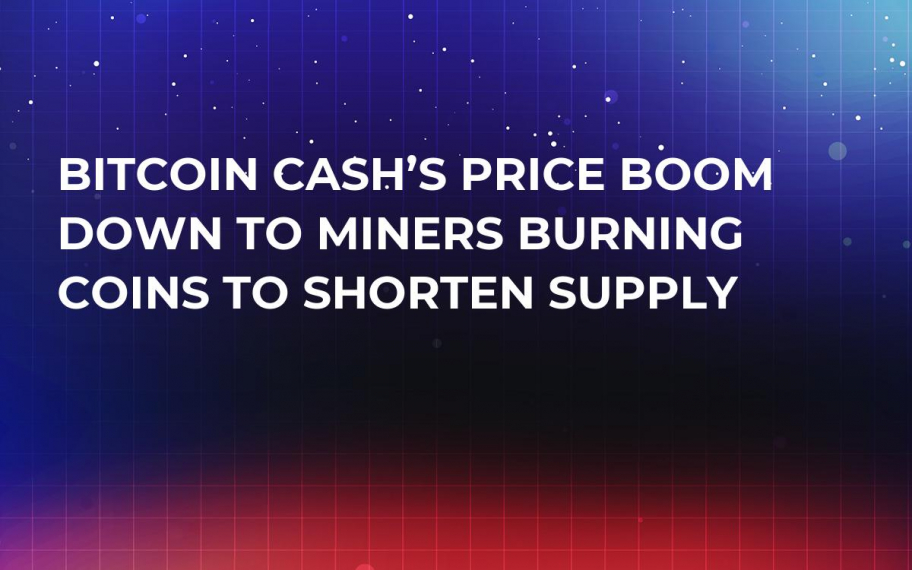 While the past few weeks have been positive for almost every cryptocurrency in the market, Bitcoin Cash has been experiencing some of the biggest gains for one of the top 10 coins. The Bitcoin rival has seen gains of over 25 percent since just Friday last week.

The reason behind this has now seemingly been discovered as it has emerged that mining pools are ‘burning’ part of the rewards they receive from solving Bitcoin Cash blocks in order to affect supply and drive demand.

This move seems to be another chapter in the ongoing war between Bitcoin and Bitcoin Cash backers, watch believing their coin is the superior, and the original.

Battles and skirmishes have broken out on social media, such as when Roger Ver’s @Bitcoin handle was suspended on Twitter, but now it looks like the war is being waged where it matters- in the markets.

“Antpool has burned $12 worth” of Bitcoin Cash a day, said Kyle Samani, managing partner at the hedge fund Multicoin Capital. “This was purely a PR game so they could say ‘reducing supply.’”

Antpool and its leader Jihan Wu are well-known supporters of Bitcoin Cash, and along with Roger Ver, pushed for the creation of the hard forked coin.

Antpool, whose users’ computers confirm 8.2 percent of all Bitcoin Cash transactions, announced April 20 on Twitter and Facebook that it will voluntarily “burn” 12 percent of the coins it receives. The mining outfit is sending a portion of the fees it receives “to a black hole address.”

There has been a bit of a swing around in things between Bitcoin and Bitcoin Cash. Bitcoin Cash came around because Bitcoin became too bloated and was becoming unusable as a payment method with slow transactions and high fees.

Now, with the Lightning Network being tested on the Bitcoin network, suddenly Bitcoin Cash has some major competition. This move to make it more scarce could be a play to up interest because of its higher value.

“Now, projects like Bitcoin Cash are struggling to remain relevant, which is hard when very few users are using the network,” Lucas Nuzzi, a senior analyst at Digital Asset Research, said. “Miners have to liquidate their holdings regularly to pay for their expenses. The move from Antpool is intended to slow down further price depreciation, by attempting to increase the perception of scarcity. Whether the move will be successful remains to be seen.”