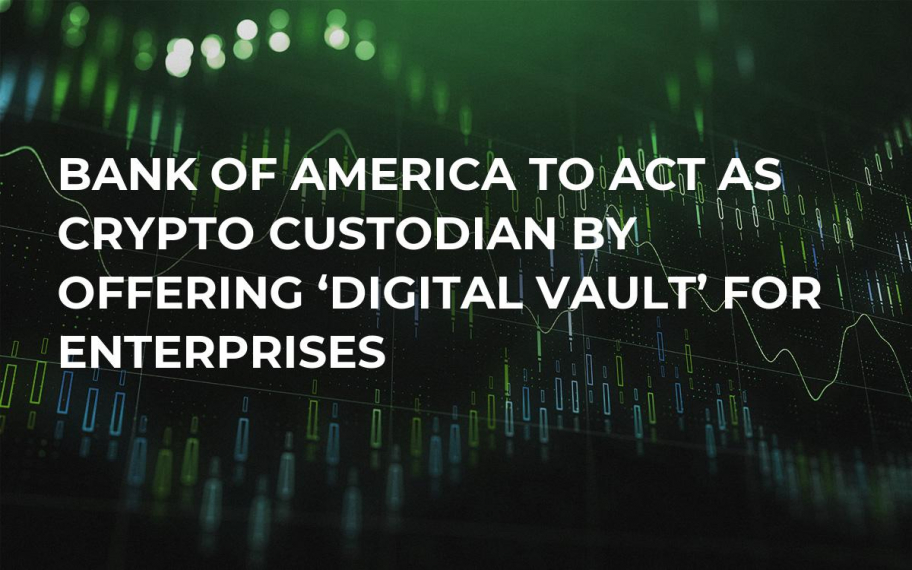 Bank of America, a North Carolina-based international investment bank, has recently filled a USPTO patent application for a crypto-oriented storage solution. The company already has more than 50 Blockchain patents.

As U.Today reported earlier this month, another American banking giant Goldman Sachs already announced its plan to launch a crypto-oriented custodial service (although, the date of its launch is yet to be announced). Now, Bank of America, the second largest banking institution in the US, will also start offering crypto custody for those investors who want to expand their security beyond private keys.
The BoA patent document states that the company is planning to create a digitalized version of an ordinary ‘vault’ that would store its clients’ private keys. The bank essentially acts like a custodian, safeguarding a certain enterprise from a potential security breach.

The race is on!

Apart from the aforementioned crypto custodian service, BoA already has plenty of other Blockchain-based patens up its sleeve– the banking behemoth has submitted about 50 applications (more than any other US company).

There is very practical reason behind this profound interest in Blockchain– they simply do not want to miss the boat if the mainstream adoption of cryptocurrencies does happen in the nearest future. Wall Street bosses seem to have learned a lesson– they launched a peer-to-peer payment application only five years later after Venmo already appeared on the market. Banks cannot afford to lose this time.

Nevertheless, a huge amount of Blockchain-related patent holdings doesn’t stop Brian Moynihan, the CEO of BoA, from being a vocal critic of cryptocurrencies. J.P. Morgan CEO Jamie Dimon also made headlines by calling Bitcoin a ‘fraud.’ He later said that he regretted using such a term, which just goes to show you that traditional banks are slowly but surely warming up to crypto.