Venezuela Officially Ties Bolivar to Petro in the Midst of 100,000 Percent Inflation 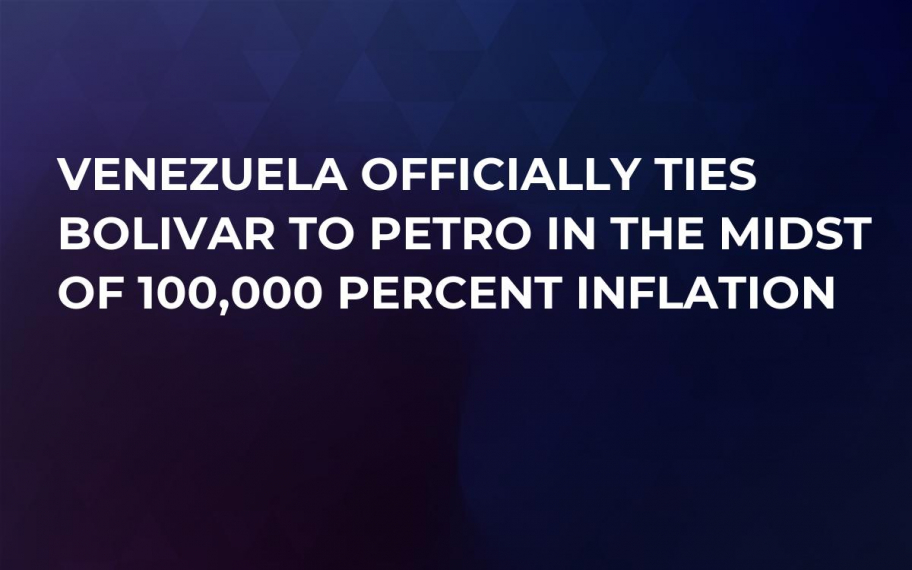 The recently launched Venezuelan electronic coin Petro is now officially equal to the Bolivar Fuerte (VEF), the former state Venezuelan currency. Besides, at the end of August, the local regulators plan to release the Sovereign Bolivar. The point is that Venezuela now has faced an increase in its economic crisis, seeing the inflation rising drastically too.

Once the new Sovereign Bolivar is issued, every Petro coin will be worth 3,600 Sovereign Bolivars and local residents will be able to convert VEF and the new Bolivar at the ratio of 100,000 to one.

The new Petro to USD rate now equals one to 60, this is how much a barrel of the local oil costs.

This is the first time that a virtual coin has been turned into an official national legal tender. Due to the current economic situation, Bitcoin could also become a fine alternative to fiat in Venezuela, but the government is opposing it, having introduced the locally-made Petro instead and letting residents use electronic currency legally.

Currently, Venezuelan VEF seems to be at the market bottom. Local residents are taking to stable fiat currencies, like USD and EUR, also Bitcoin and other virtual coins, such as Dash, since Bolivar is losing its value on a daily basis.

Bolivar is rushing down

The value of the Venezuelan fiat currency can be watched through the café con leche index, which Bloomberg successfully does. This index shows how much a cup of coffee in Caracas costs. In 2017, the price of this popular drink was 2,300 VEF. Now it has jumped to 2.5 mln VEF. This shows an incredibly intensive yearly inflation rate– over 100,000 percent.

Unofficially, one USD costs around 10 mln VEF, whereas the new official rate amounts to six mln VEF to one USD. This is the result of a 96 percent devaluation that the local fiat currency has caught.

To oil or not to oil– that is the question

Officially Petro is backed by the local oil reserves. However, it has not been disclosed how exactly it is done, so many analysts are in doubt that it is actually true.

Still, Venezuela is giving its cryptocoin an official status and has recently opened the first in the world Central Bank for electronic coins. These two steps are very important for the global adoption of crypto.