The ‘Blockchain Over Bitcoin’ Narrative- Can They be Separated?

Darryn Pollock
There are those who like Bitcoin and Blockchain, and then there is a growing number who like them as separate entities, but can they be split? 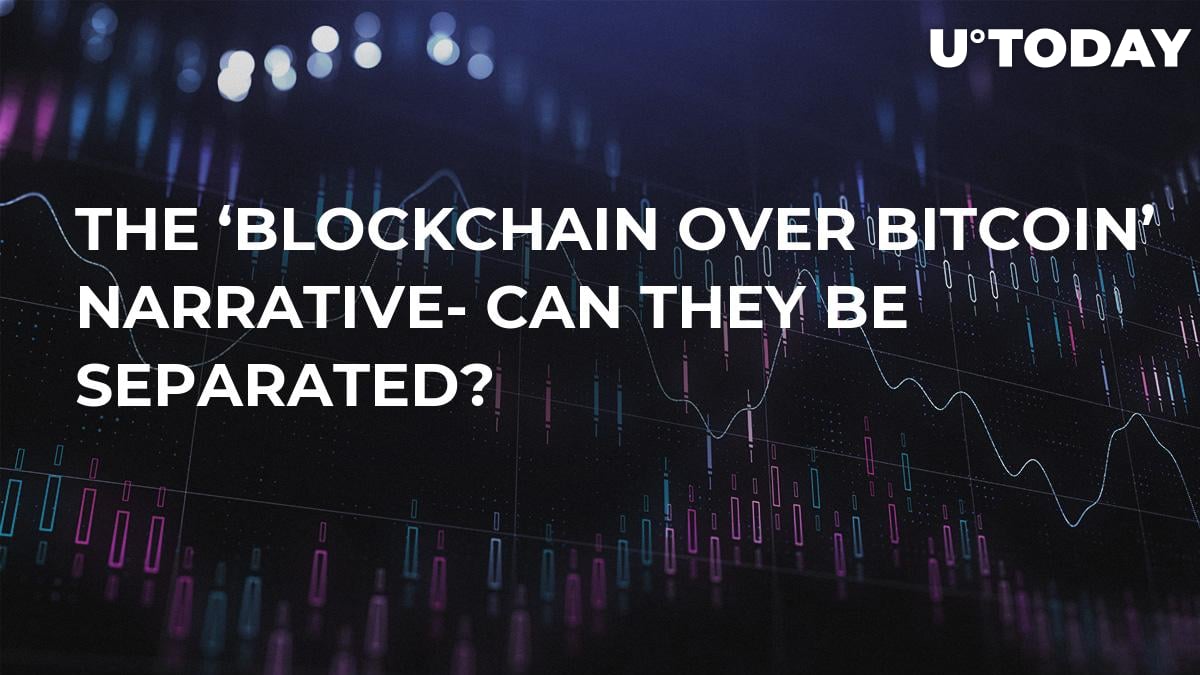 Since Bitcoin emerged, as the first showing of Blockchain technology, people have marveled at its revolutionary capabilities. It is a technology that is decentralized, immutable, anonymous, and a distributed ledger, all of these things make it applicable in a number of sectors.

This has led to a form of separation developing as many focus in on the power of Blockchain technology, and separate it from the likes of Bitcoin and other cryptocurrencies. However, the idea of separating Bitcoin from Blockchain is fundamentally difficult, yet there is a drive, especially from institutionalized entities like banks and regulators, to try and make this separation in the name of control.

China is a prime example of this as they have even gone as so far as to ban cryptocurrencies, yet have implemented Blockchain in their five-year plan. However, this idea of separating Bitcoin from Blockchain is creating something that is at its core different from the ideal of what was envisaged for this technology.

To separate Bitcoin and Blockchain is to defeat the ends of decentralization and financial freedom, yet, that does not mean it is impossible, and it is already starting to happen.

For those who have found themselves involved in the cryptocurrency space for some time now, and even from the humble beginnings of Bitcoin, they will understand that it is impossible to choose Blockchain without Bitcoin.

The separation of Blockchain from cryptocurrency has only manifested as more institutionalized and mainstream sectors have entered the market.

CEO of Lightning Labs, the developer of the Lightning Blockchain scalability protocol, Elizabeth Stark, has said how this narrative of Blockchain over Bitcoin has emerged recently.

“When we first pitched my company Lightning Labs, we actually took the word ‘Bitcoin’ out of our deck and our marketing material because it was so much about Blockchain. Now, I feel like we’ve entered into a ‘Bitcoin, not Blockchain’ world, where people understand the value of cryptocurrency technology and what these can bring. You also have proof of work in Bitcoin, you have the public/private key cryptography. There are other things that make Bitcoin special. Somehow, the Blockchain part got separated and became a thing,” she said.

For one’s own gain

However, despite this general understanding that cryptocurrency and Blockchain are interlinked, there have been some jarring instances where companies and people have forged headlong with Blockchain while trying to cut out the cryptocurrency side of things.

JP Morgan is a prime example of this. Their CEO, Jamie Dimon, famously once called Bitcoin a fraud and has been barraging the cryptocurrency space for some time. However, at the same time, his company has also been creating its own Blockchain- Quorum- as a way to understand the space and embrace its potential.

From PayPal to MasterCard and even the World Bank, all of these institutions have pushed the Blockchain over Bitcoin narrative, and although it seems flawed, they might be getting at something which is entirely new.

The issue is, Bitcoin is the product of Blockchain fundamentals. It is decentralized, immutable, transparent and anonymous, this is what Bitcoin is because that is what Blockchain offers. However, Blockchain is so diverse and disruptive, it can be used and molded to fit into a number of solutions.

These solutions are what is exciting banks and regulators, and even governments, but they do not like the trutless, not controlled, a decentralized facet of the space. This is why these entities are trying to make blockchain their own, with private chains and patents, so that there is control.

In fact, the example of how China has treated Cryptocurrency compared to how it has treated Blockchain is a perfect example. The socialist republic has, in no uncertain terms, banned cryptocurrencies from its border and tried to quash them totally.

However, at the same time, their president has included a five-year plan, and the state-sponsored TV channel, CCTV, has said that Blockchain is 10 times more important than the Internet.

Essentially, what the institutionalized entities and the likes of Chain are doing is creating a new space that is moving away from the original principles of what Blockchain was supposed to mean. That does not necessarily mean they are right or will get it right, but it is a sign of the times.