Alex Dovbnya
2018 has been an anniversary milestone for the network economy, the sharing economy, and blockchain. And they all come together beautifully 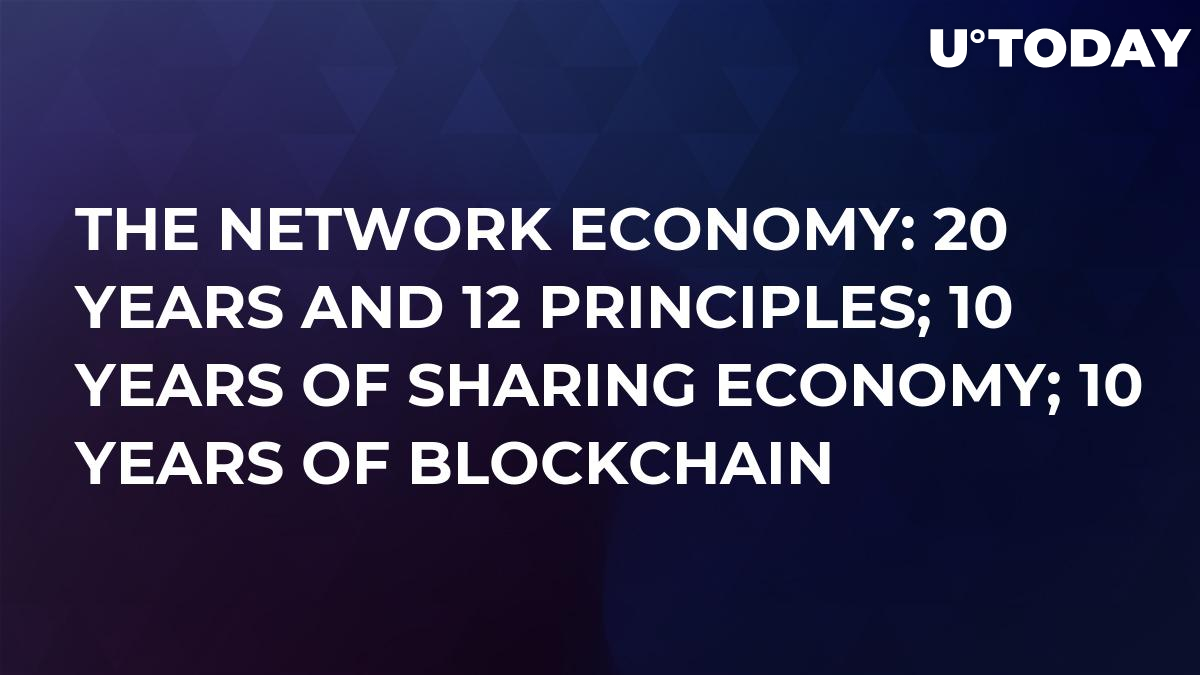 The convoluted nature of the title of this article feels like a good reflection of the past year in the blockchain and crypto space — the times have been murky and often confusing to pierce through; and yet 2018 marked three distinct anniversaries that I have an ineliminable desire to put in a row of landmarks and review. It all comes together beautifully.

Kevin Kelly is the founding editor of the legendary Wired magazine, a tech guru and a man of many talents, but to give his experience a more popular background — Kevin Kelly was one of the futurists to consult Steven Spielberg for Minority Report, and the cast of The Matrix Revisited was made to read Kelly's book on decentralized and self-sustaining systems titled Out of Control before shooting the movie.

In 1998, Kevin Kelly published the book New Rules for the New Economy — an expanded version of his groundbreaking article in Wired where he outlined the 12 principles of the network economy.

In 2018, Kevin Kelly said, "Despite two decades of fast moving technology, I would not change much in the book." To me, this is the great evidence that the 12 principles have withstood the test of time and are even more relevant today when the Internet has reached 4 billion users — another landmark of 2018.

There's still no real definition of what the network economy actually is apart from that this is the emerging economic order within Information Society.

The 12 principles, however, are the best way to understand the network economy. I would even go as far as to say they are worth learning by heart if you go online for purposes other than entertainment — which you obviously do — and they are exceptionally important to keep in mind if you are in the blockchain and crypto space in any capacity.

1. The Law of Connection

Embrace the dumb power of connections. The more connections, the better.

If you picture yourself as a node — a graph theory node with edges as connections, if you fancy — then the more connections you have, the better.

2. The Law of Plentitude

More gives more. The sum of a network increases as the square of the number of members.

The best way to understand this is to conjure up a situation where there are only two phones in the entire world. Two phones have exactly one connection between them. Three phones have three connections. Four phones — six connections. Five — ten. It's almost a runaway value increase of the network with each new phone going online.

Change the phones in the example with nodes — in the most umbrella and abstract sense of the word — and you get the idea.

3. The Law of Exponential Value

Success is nonlinear. When you start building up your network, you might feel like you are putting too much effort into adding every node for too little returns. And then — on passing an invisible threshold — the value explodes. Bitcoin stayed off the radar and relatively dormant until about 2011 when it was picked up by black markets and after some major work had been done by crypto-anarchists who — consciously or not — followed the Law of Connection and the Law of Plentitude.

4. The Law of Tipping Points

Significance precedes momentum. There's always significance in a project or an occurrence before it reaches momentum in the network.

In nature, and in epidemiology in particular, the tipping point is higher on the scale than it is in technology. For example, a disease must infect enough hosts before it becomes an epidemic and more often than not it can be successfully contained.

In technology, where the information spreads fast and the parties are usually willing for the spread, the threshold is much lower than it is in nature.

A simple example of this would be buying Ethereum in 2015 or Antshares in 2016 on realizing the significance and becoming a part of the network before the momentum.

5. The Law of Increasing Returns

6. The Law of Inverse Pricing

This works both for physical devices and the information society. A new gadget costs less or the same price and carries improved technology, and has the added value through being connected. It doesn't cost you much time or effort to quickly learn what's happening in the world or just about retrieving any knowledge online, because you are in the network, which today is predominantly Tim Berners-Lee's World Wide Web.

7. The Law of Generosity

Giving away free increases the value of the network. There's a reason open source software is as big as it is, and airdrops in crypto are still a great way to expand the network. Same applies to knowledge.

8. The Law of Allegiance

The network has no clear center or clear outer boundaries. When selecting a platform — more on that later in the article — to do business, your choice depends on the network more than it does on the actual product. For example, you'd go to eBay over Craigslist for a scalable shop business.

9. The Law of Devolution

This is about letting go at the top. There's a macro-level and a micro-level to this.

Macro-level — Sudden disintegration of established domains is as certain and sudden as the appearance of the new. Nature abhors a vacuum. There's a reason Binance is building a DEx despite being highly successful with its centralized solution.

Micro-level — Letting go at the top — be it a product, an occupation, or an industry — and doing something new is invaluable. There's a point when putting in more effort results in smaller returns.

10. The Law of Displacement

The network always wins. All isolated domains succumb to the network. 2017 was a great example of when instead of producing own blockchain from scratch — or forking an existing one following the Law of Generosity — projects resorted to deploying an ERC token. The network won.

Change is toxic; churn is creative. The world on the back of the technology has accelerated so much that the change of established domains that is toxic has turned into the churn of emerging domains.

For example, Facebook collapsing — following the Law of Displacement — would be sudden and toxic both for users and the many Facebook employees; this is change.

A startup going through many pivots until it adapts and purifies its mission, strategy and technology to gain ground, is creative; this is churn.

12. The Law of Inefficiencies

Be innovative and bank on the network instead of trying to improve your routine.

For example, if you are a Medium author, see what else is there with a different model.

2018 is the year of when we can celebrate the 12 principles withstanding the test of time, and 2008 was a checkpoint called the sharing economy.

Sources attribute the first use of the phrase sharing economy to professor Lawrence Lessig in 2008.

While many thought that the sharing economy was a novel idea, what it really was the feeling for and understanding of the network economy and its decentralized nature at the core. This was also marked by the significance and fast momentum gaining of the likes of Uber, Airbnb, Kickstarter, and many others.

All of a sudden you didn't have to rely on a single centralized investor or a group of investors that make you jump through hooks to have your project funded — instead you could go for the crowd, the community. You also didn't have to deal with a taxi company, their rates, and planned availability, instead you could go for the network of drivers. Same with hotels and the plentiful network of rooms and apartments in major and small cities, the owners of which might have never been to a hotel room themselves.

The centralized domains started disintegrating, and it appeared to be really sudden, and there were networks in place, and they were rapidly expanding networks too.

The speed of the rise and the sudden everywhereness of the relatively decentralized networks was dizzying. New books were published and terms like platform economy and platformization were coined and the phenomenon studied.

However, this was exactly what these networks were and still are — relatively decentralized. They are platforms; they are rigid economic systems with their unbreakable rules — although they are the changing and adapting rules following the Law of Churn, — the decentralization containerized and centrally owned.

And the platforms did serve a great purpose — they helped the notion and the process of decentralization advance; in fact, this was a major boost to the network economy and a landmark.

In 2008 the Bitcoin whitepaper was published and distributed through a cypherpunks mailing list — the list that was started by Timothy May, the original cypherpunk who coined the term Crypto Anarchy.

And the rest has been discussed in so much detail that if I were to type an extra paragraph here it really wouldn't add much and you'd rightfully skip it over.

What does all of this mean?

The network economy is the emerging economic order with 12 distinct principles. The principles are worth keeping in mind at all times when you go online for things are than mere entertainment.

But remember, significance precedes momentum. The backbone to sharing economy are platforms, and it's only logical and even natural — whether we like it or not — for decentralization to continue and the networks find a new and more fitting bed. And blockchain seems to be the one for today and for a significant amount of foreseeable time.

There are projects like Golem that's a network of computing power and is similar in model to Airbnb, but there's a difference that's hugely significant — it's not centrally owned like Airbnb.

The Ethereum DAO — that sparked so much interest in decentralized autonomous organizations that Wired covered it — only happened in 2016.

The Cyber Republic — a digital governance system for the Elastos ecosystem — is another important tackle in how decentralized autonomous communities operate.

And there's U°OS Network — a framework for the digital individual, the network capital and the 12 principles of the network economy — with the U°Community dapp to operate the network. It's the one I dearly support, and that excites me the most.

It's all coming together, the way we operate in the network economy is shifting gears, and centralized platforms are becoming expended shells. Understand the significance as the disintegration will be sudden and loud.

And do yourself a favor, get your private key at U°Community today.