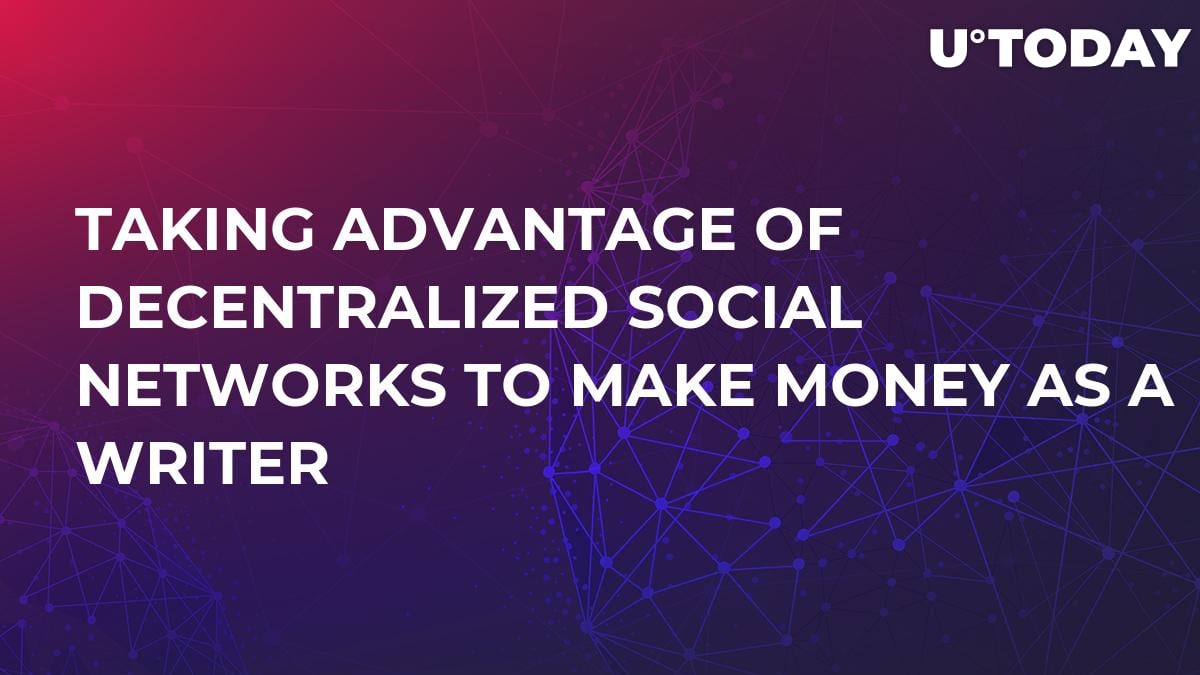 Since the Internet reached critical mass and became an integral part of the local society, the game has changed. Data has become key, and with that, so has content, and at its base level, writing is a hugely powerful tool, but as the Internet has moved towards Web 3.0, so has writing and content.

The world wide web was also seen as a huge expanse of information that anyone could access, but the way in which that information has been consumed has changed over the years. From Web 1.0, through the social stage of the current web 2.0 and now moving towards Web 3.0, the decentralized revolution content is changing.

And, because the content is being consumed differently, it is also essential for writers to move with the times. But, what is positive is that the way in which things are moving is beneficial for writers as they are agents of a decentralized world and because there is a new opportunity to be the first in line.

There are decentralized platforms out there, run on global cryptocurrencies, which allows a writer to know how much they can earn by how much and what quality work they put forward from anywhere in the world.

One does not need to go back that far to see how far content creation and writing on the Internet has changed. The Internet, very much like Blockchain, took a while to reach critical mass and become something that everything wanted to be a part of.

In the days of Web 1.0, it was a very one-way system. Websites were basically posting boards that were digitally visited by masses of people, these visitors would absorb the information, and that would be the end of the connect.

Writers were expected to dish out information and spew it across the Internet, but anyone could do it with the power to build a blog or website. However, in terms of being lucrative, it was very much like finding a needle in a haystack for these individual writers who would struggle to get their content seen and read.

But, there were then centralized powers that would enlist writers to do their work for them. Major websites and news sites would hire and drain writers for their work and take advantage of the work in a traditional sense. The workers would work and the company would profit.

The biggest edge that the Internet has gained in the last few years has been the evolution of social media. No longer is it merely a one-way interaction as users and writers now have a chance to interact and air their views.

Content on the Internet is now under constant scrutiny as any person can either comment directly on articles, or in a bigger way, take the articles to social media sites and share the content, as well as their opinions.

It has allowed writers to build their reputation online as pieces of work can go viral and the writers earn a fan base and a following. Now, writers need not even start their own websites, social media sites are open and available for information to be created, spread, and consumed at a much more rapid rate.

However, this has also allowed almost anyone to become a ‘writer’ there is no barrier to entry so the entire space is congested and convoluted. Being a good writer in today’s environment is not enough, a lot of people are losing out because of the flood in this market.

Additionally, the fact that social media platforms are centralized and monitored, means that the likes of Facebook and Twitter can control the content and install a different barrier on what can and cannot be written about.

Web 3.0, which is being built on the Blockchain, is a new space in which content is being created and slowly being more consumed. It is a decentralized place that allows writers a lot more freedom of content, but also a lot more opportunities to earn for their work.

Decentralized social networks are starting to establish themselves, such as Steemit, and interestingly, the thirst for content on these networks is huge. There is a demand for content that outweighs the supply as writers slowly start to explore this new wave of content and the Internet.

Web 3.0 is all about decentralized collaborative social networks where rewards for content are fairer and do not depend on a central entity running the platform. These platforms also provide stats on how much one can make and it is clear that the earlier adopters regarding this new content writing are far ahead of the rest and earning the most already.

Being first and making money

To give a little insight into the money-making possibilities of these decentralized platforms, there is a good article about the earning capabilities of writing on the blogging site, Medium.

The writer explains how, just by repurposing his own work on a site like Medium, he has been able to make as much as $100 in 24 hours because of the collaborative and social nature of it. People can donate small amounts of money to articles they think are good, and, because of the way Web 3.0 is going, it is about group collective and crowdfunding.

But, this space is still new, and that is a double-edged sword. There is a huge demand for content and writers, and because of this, it is worth being in early to dominate the space. But, it also takes a bit of experimenting with a bunch of different decentralized social networks to make your content work for you.

Related
Trust in Crypto Space and the Next Tackle
#Web 3.0