Ripple Will Not Be Next Bitcoin, But That’s Not Bad

David Dinkins
Ripple will not be the next Bitcoin, but it could still be wildly successful 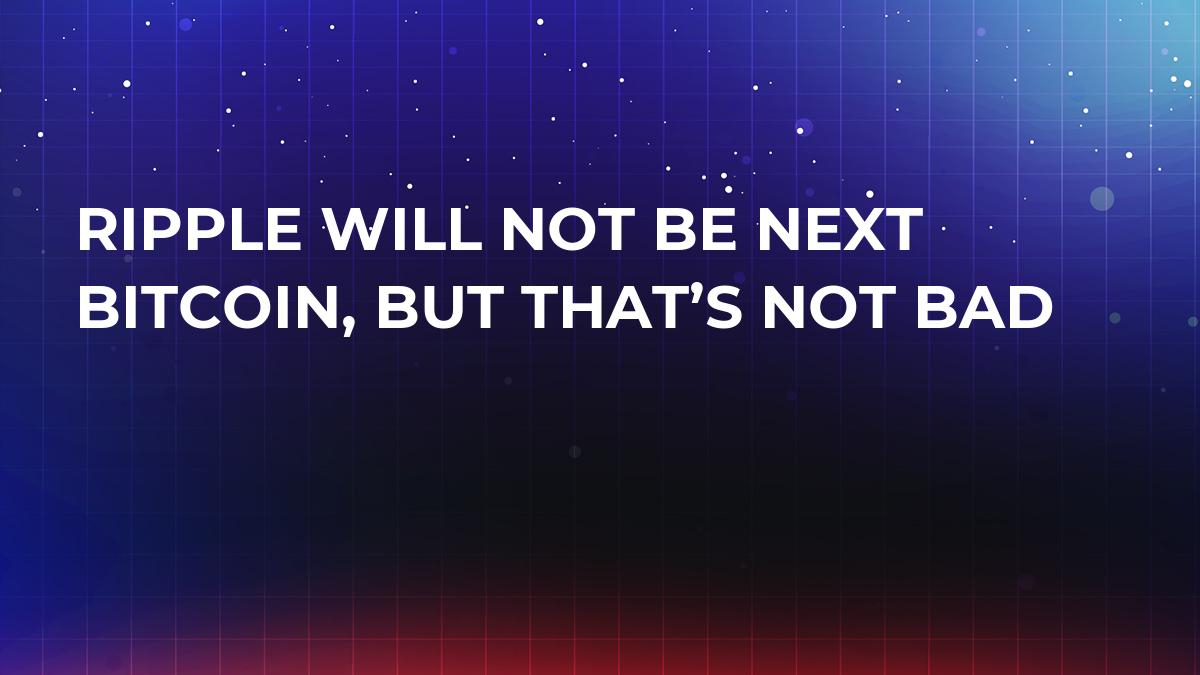 Voltaire famously wrote that the medieval Holy Roman Empire was neither holy, nor Roman, nor an empire. In the same way, at least according to the MIT Technology Review, Ripple is neither decentralized nor a currency. But lest we judge it too harshly, it’s wise to remember that it was never intended to be either.

For years, cryptocurrency languished in obscurity. Assuming they didn’t make too many missteps along the way, early adopters of Bitcoin became millionaires. Many of those who were a little late to the Bitcoin party became early adopters of altcoins, and also became millionaires. Now that crypto has burst into the mainstream and made many people fabulously wealthy, crypto newcomers are desperate to pick the next Bitcoin. Every new investor seems to think if they can buy a digital asset for less than a dollar, they’ll become ridiculously rich when that asset eventually hits $10,000, as Bitcoin did.

While it can’t be definitely said that there isn’t another nascent Bitcoin waiting in the wings somewhere, if there is one, it certainly isn’t Ripple. The currency’s wild ride last year made it the best performing crypto asset in a year of incredibly well-performing cryptocurrencies. Ripple ended the year up by 38,000 percent. No, that’s not a typo.

Those who invested before last summer are all incredibly wealthy now, even after Ripple dropped back under $1. Nonetheless, an important fact remains.

Ripple is not the next Bitcoin.

Ripple is something entirely different. While Bitcoin seeks to be a decentralized, peer-to-peer means of digital value exchange with a strong anti-establishment bent, Ripple does not. In fact, Ripple is almost the opposite- it’s highly centralized and extremely friendly with big banks. There’s a good reason for this: Ripple doesn’t intend to be a currency used by ordinary folks buying coffee. Ripple wants to be used by banks to move large numbers of very big transactions each day.

Ripple is an extension of a system banks already know and understand. Ripple is a centralized company whose network relies on “trusted” servers. Banks are cool with that because that’s what they understand. Ripple has premined all 100 bln coins and keeps the remaining 50 bln in escrow, which is fine, because that’s what big companies understand. Companies are used to an IPO where large numbers of shares are created all at once, from nowhere, and distributed to investors. They can understand premines, too.

As the MIT Technology Review states:

“Ripple’s big bet is that XRP will become a ‘bridge currency’ that many financial institutions use to settle cross-border payments faster and more cheaply than they do now using global payment networks, which can be slow and involve multiple middlemen. Bitcoin could be used to do this too, but Ripple can settle 1,000 transactions per second, compared with Bitcoin’s seven, and its transaction fees are much lower.”

The MIT Technology Review also notes that unfortunately for Ripple investors, while its technology is popular, Ripple’s XRP token is not:

“Here’s the catch, though: Ripple’s Blockchain-based payment network doesn’t need a bridge currency to work, and nearly everyone using the network has so far chosen to exchange digital IOUs instead.”

This could certainly change, and CEO Brad Garlinghouse has hinted that it will, but for now, XRP is a fairly speculative play. Ripple is not another Bitcoin, but if everything goes really well, it could be another SWIFT or Visa. The only remaining question is whether the company’s bank customers will use the native XRP token, or settle in dollars as they currently do.