Past ICO Review: Why You Can’t Take Polybius To the Bank

Tzao Se
A banking project named after a video game of death, decides to become something else after raising $32 Mln 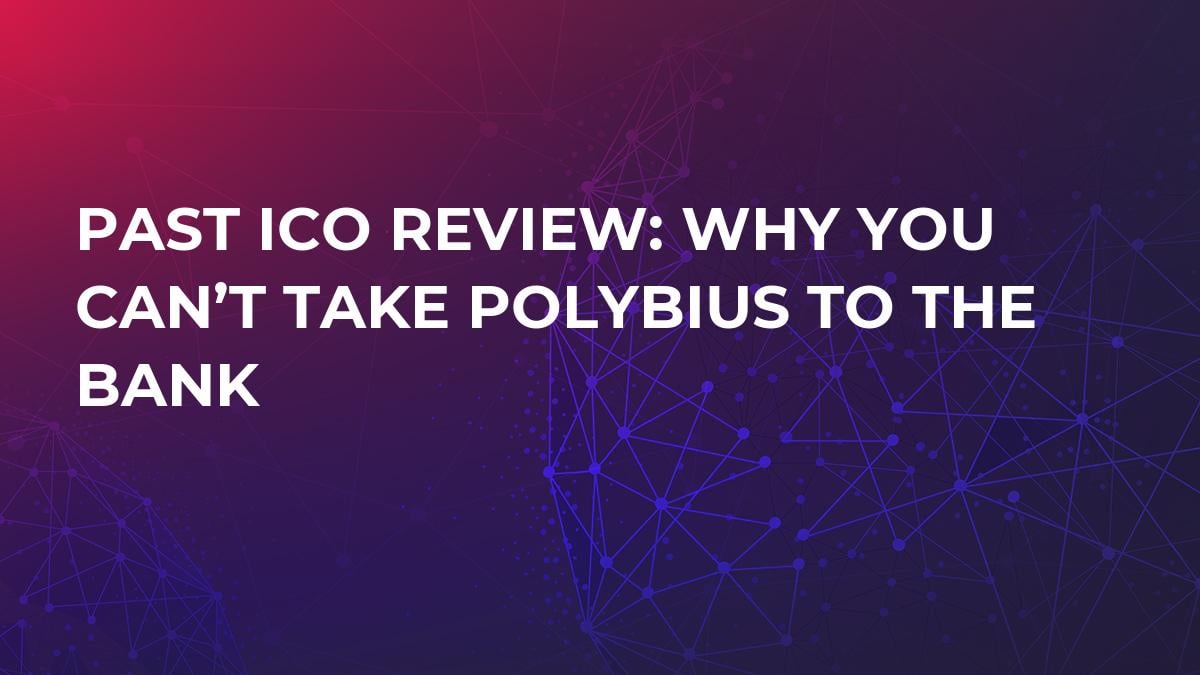 It’s in the name. The original dark meme that have given Polybius name its fame was indeed coin-related, but not the type of coins we are now accustomed to: not cryptocoins, but pennies.

Polybius, as urban legend has it, was a secret experiment of the US government, a coin-operated arcade game with a psychoactive and addictive effect.

First published on coinop.org (sic!), the creepypasta about Polybius, told the story of an obscure arcade game machine, regularly visited by men in black, who took note of high-scorers, is scary enough.

Players allegedly suffered from a series of unpleasant side effects, including amnesia, insomnia, night terrors and hallucinations, says the Wiki article describing this dark legend. Approximately one month after its supposed release in 1981, Polybius is said to have disappeared without a trace. There’s no proof that the game ever existed. I swear that I haven’t edited it to suit the story.

Our hero today is Polybius’ namesake. Seriously, the brave pack of adventurers behind the Polybius project named it literally after a legendary video game of death that never existed.

Despite this fact, the project raised about $32 Mln in 2017 on the promise essentially to be a bank. Now, the initial whitepaper isn’t accessible from the main website.

What the team forgot to mention

Let me spell it for you: Polybius’ team have decided they will not be a bank, but rather something else. After raising the money on the promise to be a bank, and not something else. Citing a EU directive that was adopted by the EU Parliament two years before their ICO as a new circumstance.

Delovõje Vedomosti, a respected business news publication from Estonia, where Polybius is incorporated, interviewed Polybius CEO a couple of weeks ago. The interview is a pure gem. Let me quote some, ehm, quotes.

Nobody expects the Spanish inquisition

“When the project’s idea was being gestated, we thought to create a full-fledged bank that would offer all banking services from A to Z. But after having spoken with Europe’s regulatory institutions, we came to an understanding that from 2018 onwards, being a bank is not the most beneficial scenario. It is all about the upcoming changes on the banking market, and the data interchange - I mean the second payment services directive (PSD2), that will allow third-party agent access to european deposit-holders’ bank accounts”.

Polybius CEO meant XS2A (Access to Account) set of requirements, a part of PSD2 directive. Of course it's adoption timeline  was known to be arcane and ever-changing, and still is. But, it was clear to anyone in the industry that PSD2 was going to become a law across the EU in the short-to-medium perspective.

Polybius token sale started on May, 31, 2017, and closed on July 5, 2017. PSD2 has been approved by the European Parliament in 2015. XS2A was being discussed in the banking and industry way before Polybius project was being “gestated”. It was a major point of interest way before Polybius  was even concieved. On June 5, 2017 it was even in the “Forbes” (US, not even European edition!) for God’s sake.

And Polibius CEO has a nerve to say that PSD2 have somehow changed the rules of the game for them. It was on the table all the time - not always clear, changing sometimes, but it was there.

Now, let’s see what is the team is up to. The interview continues: “Plainly speaking, with a window that big, we don’t need a door anymore, so we can concentrate on what’s important - on aggregation of payment and financial instruments”.

Basically, Polybius now is not a bank, but rather a service that allows their users to aggregate their financial products across various banks, using banking API prescribed by PSD2, - a single banking app for all accounts and services that person uses. This app will analise user’s spending habits, and offer them tips on how to acheive their financial goals. Essentially, a sort of meta-banking app comes to mind. Good, but does it worth $32M?

“How will you earn money?”, DV’s reporter asks. “Some services will be free, some  premium”, - reponds Mr. Turygin, before dropping a bomb that will surely send ice waves up their tokenholders’ spines. “Also, people’s financial information is a very powerful profiling source, that can be monetized by means of ad traffic”.

But the final chill is still to come.

“What kind of marketing needs tens of millions?”

“What kind of marketing needs tens of millions?”, - the reporter is seemed to be clearly  stunned.

“The quality one. Conferences, television, Google, social networks. To run a successful ICO, hundreds of thousand dollars are needed. Funds are needed to develop the project, and make the world know about it, loudly. A successful fintech product launch, requires an enourmous expense, so millions are required to make a true quality product”.

I could rest my case here, ladies and gentlemen, but there’s the last one. Polybius website states that they are hiring the “Chief Legal Counsel”. Maybe, just maybe, if this was done 2 years before, things would be different now?

Looking into the crystal ball

What kind of future expects Polybius and the money of their investors? If we were in the year 2000, I’d look for Aeron chairs purchase for their offices - seeing that, I’d be sure the project was doomed.

I don’t know what’s the equivalent for Aeron these days, but if we somehow learn about lavish spending on office furniture, or even worse, the excited interviews in interior design magazines about how great and nice and easy and comfortable Polybius’ offices in Brussels (they have moved to Brussels, hell yeah) are, I’d be sure these people are done with.

This market cries for regulation. What happened here? The team have changed the idea which they have more than successfully sold to crowd investors, after raising the funds. The effect of this change on the revenue is unclear. Token holders had no control over this decision.

ICOs: start regulate yourself before the government does. Make it a rule to have an independent director or two on your board with a veto power, to represent token holders. Voluntarily enforce corporate governance principles. Or daring expirementators and intrepid pioneers like Polybius will freaking drag us all to the bottom.