Eric Eissler
Digital IDs are here and so are digital contracts, but who recognizes them? 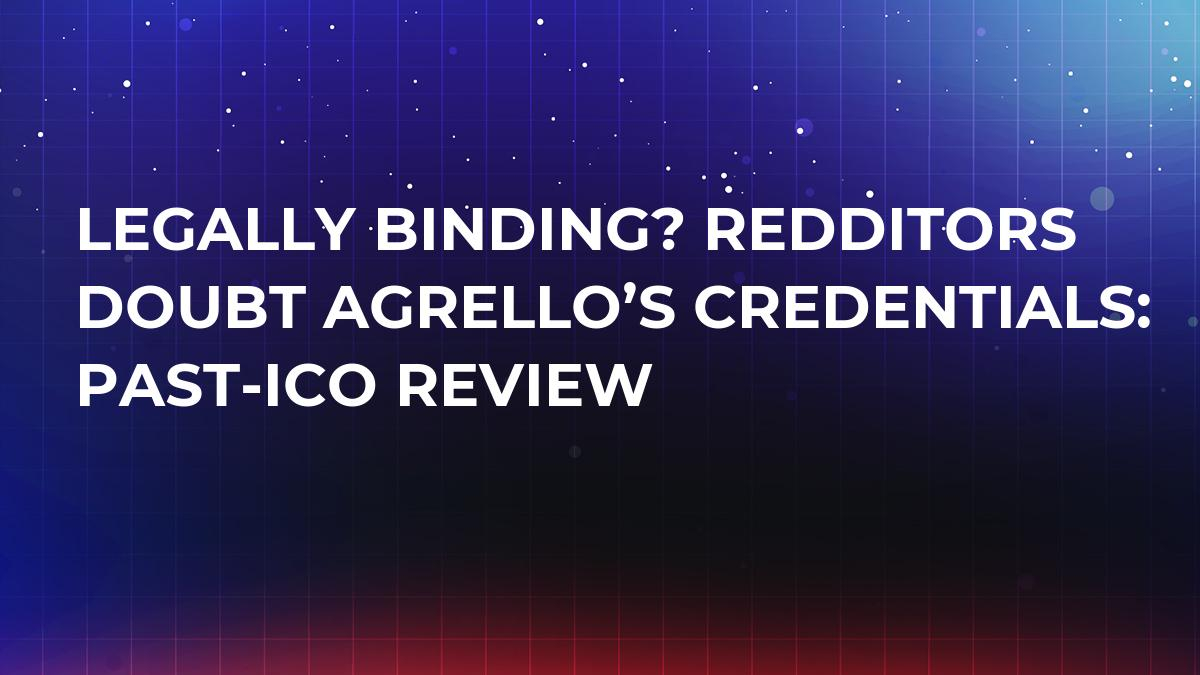 In a one-month ICO sale from July 17 to Aug. 18, 2017 Agrello was able to raise $30 mln in funding to support its efforts in making a smart contract that are legally binding supported by AI. However, a fast-sinking token price tells a different story.

In the red, but not yet dead

We already know that Agrello raised $30 mln in the ICO. However, when we examine the token price from start to current, we see a disturbing downwards trend that is not a promising sign for potential investors.

Agrello’s token DLT entered the market at $0.47 on Sept. 9, 2017 and has since fallen to $0.08, an 80 percent crash, as of the time of writing. The marketcap is only at $6 mln, an 80 percent difference from what was raised initially. Where did that money go? The company is rated 491 on CoinMarketCap, and steadily falling.

Really legally binding? In which jurisdiction?

It’s funny, when companies come out saying they will do this and they will do that, and then they don’t or they just push back deadlines and give themselves more time to come up with more excuses as to how to delay the inevitable.

Legally binding or not, I don’t believe it has been said that “computer code” can count as a legally binding contract. Most judges would want to see a paper contract signed between both parties. Agrello offers digital identity services and the ability to sign its contracts with the click of a button. It highlights rental leases as a one click to confirm.

Another funny thing is when you create a new website, you should have your old address redirect to the new one, but Agrello, does not have such a redirect built in. Instead, it goes to the old website and askes the visitor to click on the link to go to the new site. It is a bit odd to that. What if the visitor decides not to visit the new site and instead stay on the old site? Will he/she be misinformed?

While the website claims that Agrello smart contracts are certified in more than 200 countries, last time I checked there are only 195 officially recognized countries in the world, and they are only hoping to have 100 registered partners by 2019, which is quite low in such a long amount of time.

It could be that competition will prove to be a challenge in the coming years are more and more companies get into digital identity which is verifiable through blockchain technology.

According to Agrello’s official blog, the latest update about their service was on May 3, 2018, which gave a sneak peak of the digital ID and signature process. But looking back at the roadmap, the ID should have already been created last year.

A quip from the blog reads, “As you know, online identification is a time-consuming process and we aim to solve this problem. But for that, digital ID is needed.”

It may be time-consuming but there has not been any update since May.

If you check out Reddit, the Redditors are rather skeptical of the project and are unsure if it can really be done, or if they are just buying more time.

The blog is not that active and of the posts that are there, they are not really focused on development of product and services.

Scary Pattern Could Send Bitcoin Below $10,000, According to This Top Money Manager
Show all
Ads
Ads