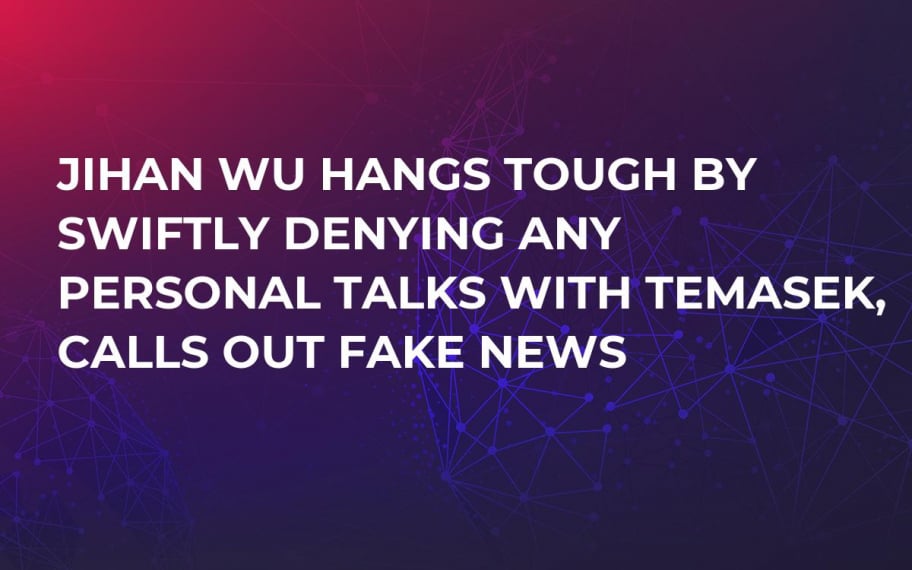 Jihan Wu, the CEO of the largest crypto-oriented company Bitmain, has recently denied the rumors about personally reaching out to Temasek to make a plea. At the same time, the overly hyped Bitmain IPO is setting up invests for a disappointment.

There was no conversation

Jihan Wu was forced to make a public statement after allegations about Temasek withdrawing its support for the Bitmain IPO started picking up steam. In his recent tweet, Wu states that he doesn’t have time to comment on every Bitmain-related news, but he claims that the majority of these news are fake.

Even if I needed to contact Temasek, I guess I would have used Wechat or something. Oversea phone call’s quality is very bad. I don’t have the convenience to comment most of the news related with Bitmain, but they are mostly as fake as this. pic.twitter.com/EaYYbzfEhX

It is worth mentioning that the latest round of Bitmain’s IPO pretty much depends on Temasek. The rumors about the Singapore-based investment giant throwing Bitmain under the bus started spreading in Chinese media a few days ago.

As U.Today reported earlier, things are not going that smooth with the long-awaited Bitcoin IPO, since the leading ASIC chip manufacturer lied about the involvement of some companies in the pre-IPO funding. In particular, DST Global and SoftBank are among those who have already denied their participation.

It has been also recently revealed that Bitmain holds more than one million BCH coins. Subsequently, critics suggested that the mining behemoth is launching an IPO in order to support the market price of the Bitcoin's little stepbrother. Some Twitter users urged Jihan Wu not to waste an opportunity to buy BTC (while he still can).

You still have a chance to buy back around 80k $btc just think about it .. pic.twitter.com/gNkPmdIB8i

Bitmain was initially predicted to top $35 bln market cap after holding an IPO, solidifying its status of one of the biggest companies in the word, but this estimation will more than likely turn out to be overestimated.

However, a seemingly controversial IPO might not be the biggest problem that Bitmain is currently facing. A recent Bernstein report shows that the mining company, which has been widely criticized for establishing a near-monopoly, is losing its technological advantage over competitors. Bitmain is still controlling over 85 percent of the market, but other chip manufacturers in the likes of Canaan Inc. are nipping on Bitmain’s toes.