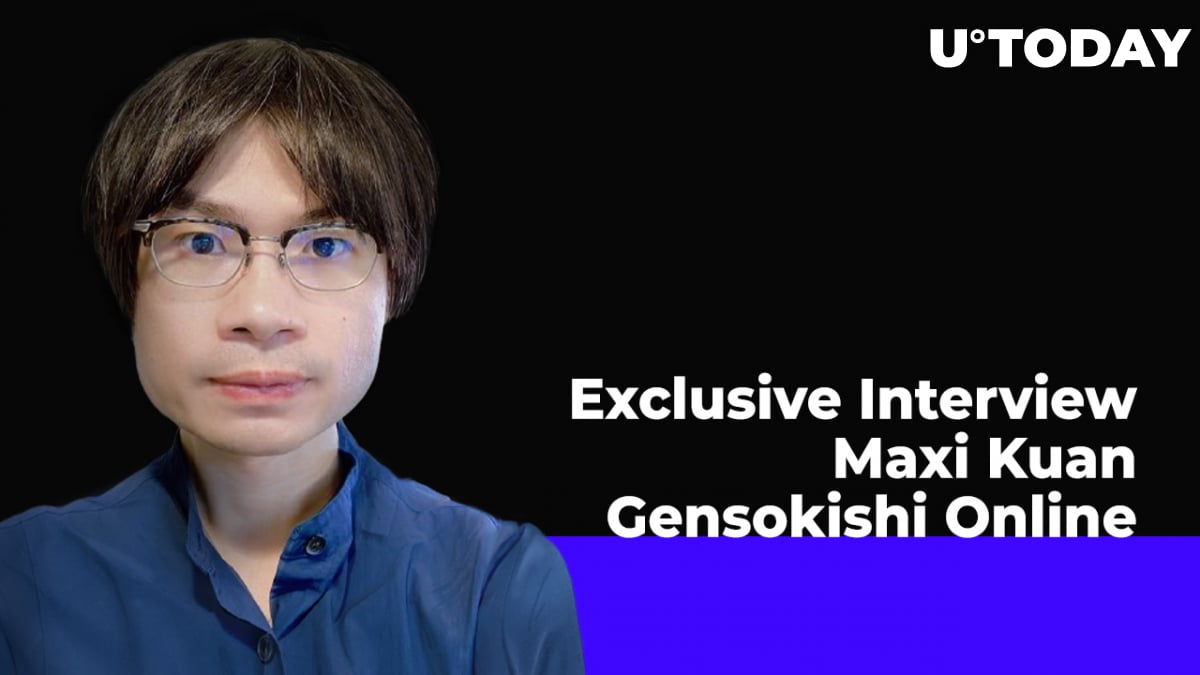 Last week, we spoke with the CEO at GensoKishi Online, Maxi Kuan. We spoke with Maxi previously around six months ago but, this time, we went even deeper and discussed what has changed in the project and even in Maxi’s portfolio since then. Turns out they have made great progress and, today, they are launching closed alpha tests, so don’t miss this interview!

U.Today: It's been around half a year since we did our previous interview. What's happened at Gensokishi Online since then?

Maxi: Yes, many things have happened. Since our last interview, we have launched on TrustPad. We did an IDO, and re-incorporated on TrustPad in the FCFS round. We sold out all of our tokens in 20 seconds at TrustPad. That was the best record at that time. Also, we have been listed on the exchange Bybit. Before the listing, we did a staking pool event, and that was also a success.

We got almost 70,000 people staking with the token on the Bybit pool. There was a $200 million USD TVL in the staking pool. That was also a record.

After listing, we reached 87x the launching price. That was in February of this year. We have been ranked at the top of the ROI ranking of GameFi 2022 by CryptoRank.io. Now, MV token is listed on many exchanges, including on some DEXes. A lot more good news is coming soon.

U.Today: Congratulations. What accomplishment are you the most proud of, and why?

Maxi: I think it's the community. We have really created a great community. We have a lot of users from Japan but also many other Asian and European users. They love our project, and we listen to their feedback and voices. That would be the basic element of a community. Our token, listing, and all of our projects are supported by a strong community. I think that we really built a good and peaceful community, via our Discord, Twitter and Telegram. That is the basic, most important factor for building GameFi or Metaverse. I am very proud of our community.

U.Today: You mentioned that many exchanges listed your token. How many exactly, and which ones are next?

Maxi: We are on four centralized exchanges. The first one is Bybit, followed by MEXC and Gate.io. Last month we got listed by KuCoin. As for decentralized exchanges, we have Uniswap and QuickSwap. What’s next? Actually, that is still confidential. I can tell you that another top Tier 1 exchange will be announced soon.

U.Today: Apart from the MV token, you also have ROND token. Why do you need two tokens for one project?

Maxi: Just like Axie Infinity, we have two tokens. But we have a different concept from Axie Infinity. In our previous interview, we talked about MV, our governance token, and now we have ROND token. We have two tokens because they have two clear use cases, and they have two different ecosystems. MV is the governance token, which has the right to control the Genso Metaverse, such as acquiring land, the map and making original NFT objects and even doing some voting for the DAO community.

On the other hand, ROND token is simpler. It plays the role of an in-Metaverse coin. In the Metaverse, everything costs money. So, ROND token plays the role of money. You buy items, you buy weapons, or you earn from lending your gear. It is like a scholarship. Or you can go to another world; there will be many worlds in the Genso Metaverse, so you can go to other worlds. To do that, you need to have some ROND token. Everything costs ROND. It's just a basic factor of the ecosystem of the Genso Metaverse. We thought it's better not to make the same token control the Metaverse and play the role of money in the Metaverse. So, we split it into two tokens to make the ecosystem more clear about their uses.

U.Today: Can you tell us about your two NFT auctions? How did they go?

Maxi: We had one NFT auction in February. It was a huge success, I have to say. The bidding numbers reached about two million USDT. The highest bid on one individual NFT was about $52K USD. That is not cheap. It was beyond our expectations. The first one was a collection of Norse mythology—the gods, like Thor, Loki, and Odin. Of course, they are cool. Our users loved them, so that was a big success. We have announced a collaboration with a very famous artist who has already designed a famous game. You’ve probably heard of the game Final Fantasy? The designer of Final Fantasy has joined our team. His name is Yoshitaka Amano, and he's now designing some very cool stuff for us. There will also be another NFT tie-up. We will be announcing more collaborations very soon.

U.Today: Very soon, Gensokishi Online will launch closed alpha tests. Can you tell us about that?

Maxi: Recently, our team has been working on alpha. It's coming at the end of May, the 31st of May. Our alpha ticket will be an NFT. You will have to own the alpha ticket NFT to enter the alpha testing game play, and there will be gold, silver and bronze tickets. Each ticket offers the same access to the game, but with different benefit levels. You have gold and you earn points worth 2x, with the silver one, you earn about 1.3x and bronze is 1:1. It's called the Alpha Hunter Certificate. Items drop after you beat monsters.

In alpha, there will be different benefit levels. Alpha is mainly to test the basic game infrastructure, the server loading and the economics, and the ecosystem of ROND that we just talked about. We want to watch how people use ROND and how many ROND will be spent or burned in one or two weeks. There will be two rounds, alpha test round one and round two—after a one-week adjustment period. In alpha, the graphics will be the same as in the old version. We have to do some adjustments following the beta version. We would still like to invite more users to join our closed tests.

U.Today: Maxi, what are your plans for the next 12 months?

Maxi: From the start, we keep saying that we aim for Metaverse. We are in the play-to-earn sphere, with an ecosystem of economics in the Metaverse and eventually in the DAO world. We will keep collaborating with more and more famous IPs and other NFT projects, and even other GameFi projects in the coming year, especially for the land and the map. We want to collaborate with more actual companies, brands—like fashion brands—and anyone who is interested in the Metaverse, bringing them to Web3 and NFTs and gameplay. That will be our main focus in the next year.

U.Today: Now, for the personal questions. Has anything changed with your crypto portfolio since last year? What are your thoughts on the current market? I can't remember if you invested in Terra’s Luna and UST…

Maxi: Right, the timing of this interview is very bad for some people. What happened to Terra Luna was a disaster, but I think it's in the process of becoming a new Terra ecosystem. It is the start of a bear market—maybe. But for my portfolio, I still own the major tokens, like BTC, ETH, and of course my token, and BNB, BUSD and USDT—it's still the biggest market share stablecoin. Everybody said we are in a bear market, but of course that is related to the Terra and Solana issues, but I don't think this whole market is in a bear market.

We are in a different place from four years ago. There are so many ecosystems now. We have DeFi, NFT, Metaverse and, of course, the original pre-crypto system. GameFi is a different concept and world compared to the pure crypto ecosystem. So I think that the transition from the bear market to the bull market will not be long. I think many Web2 players are still trying to get into Web3. They will be new investors and new players, the new powers of the whole market.

So, we are in a bearish market now, but I don't think it will stay for more than a year and will change to a bull market in about half a year. I want to think positively.

U.Today: What are your thoughts on the Bitcoin price? Do you still believe it will reach 100K by the end of the year, or do you have a new guess?

Maxi: That's what I said last December. Well, I still think so. Of course, we are now in a different situation with Luna and Solana. Of course, the crypto world changes very, very fast. But with development and the Web3 revolution, I still believe in Genso. We work really hard on this project and want to improve the ecosystem. And yeah, I still believe that BTC will reach 100K.