David Dinkins
The idea of a Bitcoin ETF received a big boost today, with one influential insider writing to the SEC encouraging approval. 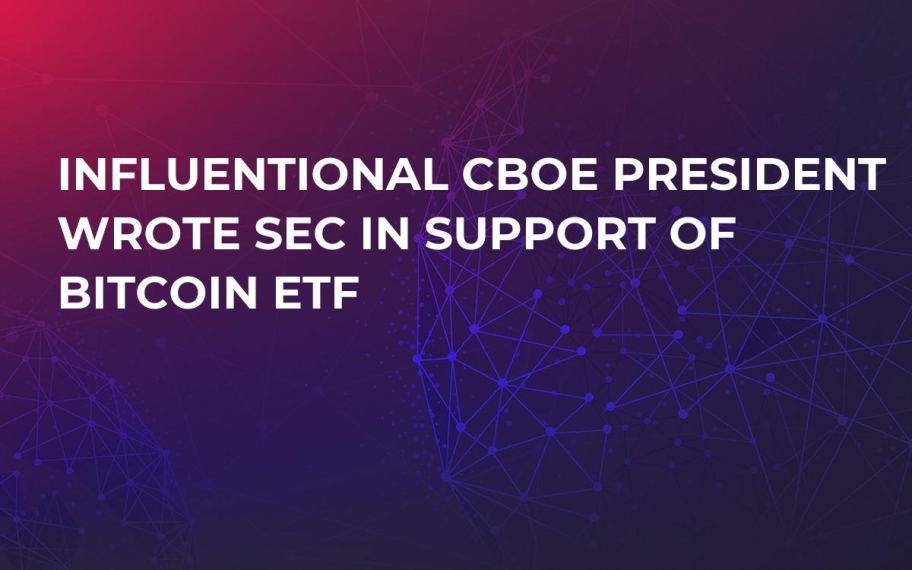 The president of Cboe Global Markets, one of the regulated futures markets for Bitcoin, has written to the SEC encouraging the creation of a Bitcoin exchange traded fund (ETF). A Bitcoin ETF would allow ordinary “retail investors” the ability to quickly and easily purchase Bitcoin through a traditional brokerage without worrying about securing an actual cryptocurrency wallet. A Bitcoin ETF could also be purchased as part of an individual’s tax-advantaged retirement accounts, such as an IRA or 401(k).

People in the crypto community have been talking about Bitcoin ETFs since at least 2014, when the Winklevoss twins made the first formal proposal for such a product. Three full years later, the SEC finally got around to reviewing the proposed ETF...and rejected it. The rejection came in January 2017, and two more rejections of similar products followed. In their rejection of the Winklevoss ETF, the SEC suggested they would reconsider a Bitcoin ETF if regulated futures markets were developed.

In December 2017, two such futures markets were launched. This January, the SEC questioned whether the market was ready for a Bitcoin ETF yet, due to the low liquidity and fragmented nature of the Bitcoin market.

Today, Cboe’s president, Chris Concannon, wrote the SEC in response to their objections. Concannon pointed out that the Bitcoin spot market has just as much trading volume as many traditional markets. Likewise, according to Concannon, the regulated futures markets are growing rapidly:

"Looking specifically to Bitcoin, the nascent futures markets are developing quickly and, while the current bitcoin futures trading volumes on Cboe Futures Exchange and CME may not currently be sufficient to support ETPs seeking 100% long or short exposure to Bitcoin, Cboe expects these volumes to continue to grow and in the near future reach levels comparable to those of other commodity futures products at the time that they were included in ETPs."

Concannon also addressed the fragmented nature of the Bitcoin market in an interview with Business Insider:

"If you look at the currency or the gold market, it is probably more fragmented than crypto. There are a lot of venues to access currency markets."

JP Morgan Chase has suggested that an ETF would be the holy grail for Bitcoin. The company noted that following the approval of the first gold ETF in 2004:

"Launched in 2004, SPDR Gold Shares ETF was the first gold ETF approved in the US by the SEC. Since its launch, retail access to gold has skyrocketed as new investors more easily turn to the gold market as a portfolio diversifier and as a foundational asset."