Ethereum (ETH) 2.0: What is Ethereum’s Next Phase After the Istanbul Hard Fork

Vladislav Sopov
The Istanbul Hard Fork has opened the door to Ethereum (ETH) 2.0. What’s next? Is the old Ethereum network on borrowed time? 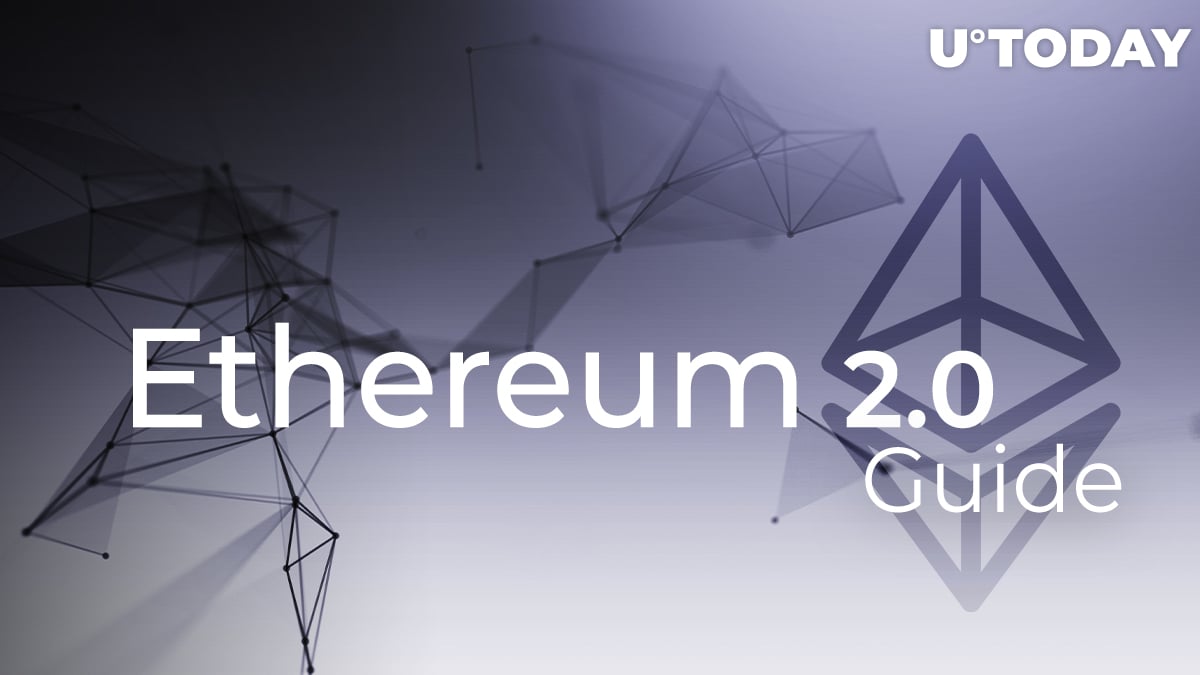 Ethereum’s Istanbul Hard Fork, which was recently launched, is not only important in itself. This hard fork is probably the last upgrade of such level before the Ethereum 2.0 migration.

It will be Ethereum without mining.

It will be Ethereum consisting of interconnected parts or shards.

It will be Ethereum with staking.

In short, no network has ever conducted such a migration. Therefore, nobody knows precisely how it will function.  U.Today has compiled all of the information to let its readers judge whether Ethereum 2.0 is a good idea.

What is Ethereum (ETH)?

Ethereum (Ethereum Network, Ether, ETH) is a blockchain that acts as a host for decentralized applications or decentralized computing service. Ethereum operations are executed via the Ethereum Virtual Machine (EVM).

Ether is the cryptocurrency generated by the Ethereum platform and used to compensate mining nodes for computations performed. Each account on the Ethereum network has its own address and balance.

Ethereum was proposed in late 2013 by Vitalik Buterin, a cryptocurrency researcher and programmer. Development of this blockchain was funded by an online crowdsale between July and August 2014. The system went live on July 30, 2015. This accounts for about 68 % of the total circulating supply in 2019.

Ethereum 2.0, which has also been dubbed ETH2 or Serenity, is Ethereum's major network upgrade. It will bring several new features to the Ethereum network including the following:

This shall result in a completely new network with redesigned economics, consensus, and mechanism of operation.

Like any systemwide upgrade, Ethereum 2.0 pursues ambitious targets. In accordance to Danny Ryan, core developer of the Ethereum Foundation, there are five goals for Ethereum 2.0:

In cryptocurrencies, a fork usually means a radical change in the way a blockchain validates transactions. There are two types of forks. A hard fork is a change in which old-ruled software will see blocks produced in accordance to new rules as invalid. A soft fork is a fork in the blockchain in which old network nodes and newly upgraded nodes follow different rules. In the case of a hard fork, all nodes are required to work in accordance with the new rules. Therefore, the software needs to be upgraded.

Most of the known forks for the first years of Ethereum’s existence include Frontier (or Genesis Block, the initial block of Ethereum), which occurred on July 30, 2015, the DAO Fork (resulting from a serious bug in the code that led to a split between Ethereum and Ethereum Classic), and the Byzantium Fork of 2017 (seriously addressed scalability issues).

Some forks have also occurred in emergency situations, including the EIP-150 Hard Fork and the Spurious Dragon Hard Fork.

Ethereum’s Constantinople was the most important fork of Q1-Q2 2019. It started as a Proof of Stake (PoS) transition (a.k.a. Casper update) to make Ethereum faster, cheaper, and more efficient. While no new coins were launched from this upgrade, it did improve the existing protocol.

It’s not so easy to figure out the exact launch date of the network migration onto Ethereum 2.0. In July 2019, it was proclaimed that this process will be launched on January 3, 2020, but this date remains unconfirmed. At the moment, the test environment for the initial stage of Ethereum 2.0 is being prepared by Saphir Labs. So, anyone who uses Parity Ethereum can now enjoy the full end-to-end testnet.

To avoid spreading any fear, uncertainty, or doubt (FUD), the Ethereum Foundation has never disclosed the launch date of Ethereum 2.0. Danny Ryan described the current status of development this way:

“It has never been our launch date. That’s what I’ve been trying to communicate ever since, that date kind of has become pervasive. But we’re all targeting a Q1 launch.”

Thus, we should prepare ourselves for something great in Q1 2020.

The transition to the new network can’t be executed in a flash. Therefore, developers foresee three main phases of Ethereum 1.0’s evolution to Ethereum 2.0:

This is the cornerstone of ETH 2.0, where the PoS consensus will be rolled up. It means that validators (node holders) would need to be registered, rewards and penalties for them would need to be set, and the rules for interaction between them would need to be established. A new Ether (coin) will also emerge during this phase. It is still unclear how it will be issued, but most likely, a special smart contract will allow for a 1:1 exchange of existing ETH.

This is the main load of the new consensus. Shards are the interconnected parts of blockchain (mini-blockchains). With shards, parallel transactions can take place without having the throughput for every transaction within a shard updated on the main chain. As far as the Beacon main chain is concerned, each shard chain block represents a group of data bits. For some time, the current Ethereum (ETH1) and the Ethereum with sharding (ETH2) will co-exist.

During Phase 2, the foundational aspects of the previous ETH 2.0 releases will come together and provide functionality for the updated network. A new operational mechanism called Ethereum WebAssembly (eWASM) will be launched instead of Ethereum’s Virtual Machine. eWASM will work much faster.

It’s really difficult to predict how the transition to Ethereum 2.0 will affect the price of Ethereum. It looks like there are two possible scenarios. If the transition is smooth, then users will be incentivized to participate in the staking process and to buy Ethers. As a result, the demand will grow, and so will the price. The other scenario is that the miners will shut down their equipment, the network will operate slowly, and the users will eventually abandon it.

Those interested in Ethereum 2.0’s price should trace two processes - how the Ethereum Foundation delivers new releases of ETH 2.0 functions, and how these functions work.

As of today, the minimum stake to become a validator is 32 ETH, or $4,714. This sum needs to be sent to a special contract in order to let the system recognize you as a validator. How much every validator earns depends on how many Ethers will be sent to the contract (i.e. ‘staked’).

Vitalik Buterin and Justin Drake of the Ethereum Foundation suggest that the most likely number is 5% APR.

Are you interested in becoming an eth2 validator? Check out the first post on staking from #ethereum researcher @carlbeek!https://t.co/En5N4q5WxT

Ethereum Decentralized Exchanges are the exchange services that allow users to swap ERC-20 (Ethereum-based tokens) with each other and without a third-party custody. Well-known decentralized exchanges include Radar Relay, IDT Exchange, Erc dEx and DDEX.

Despite the fact that TRON and EOS are considered the top dApps hosts for games, several popular online gambling services are located on the Ethereum. At the moment, a user can play almost 400 Ethereum games, with My CryptoHeroes and CryptoDozers card games being the most in demand.

The crucial thing that we should know about the pros and cons of Ethereum 2.0 is that nobody has finalized so sophisticated transition. Therefore, many aspects are still unpredictable.

For regulators, Ethereum 2.0 still appears as an “uncertain asset”. For example, Commodity Futures Trading Commission (CFTC) Chairman Heath Tarbert said that the CFTC is still evaluating whether Ether will remain a commodity under the new model. Ethereum developers and proponents believe that the PoS may actually bolster the case that Ether is “sufficiently decentralized” to be considered a commodity in the eyes of U.S. regulators.

Eth 2.0 is a series of network upgrades being carried out to the Ethereum network to increase scalability etc. but will take at least 2 years to be completed, probably longer given the scope of the changes and the challenges involved.

The developers of Ethereum are sure that the main upgrade that can be achieved by Ethereum 2.0 is that of scalability. Vitalik Buterin, the Father of Ethereum, explained it in a podcast:

the main thing that Eth 2.0 makes better is obviously scalability. And scalability is important because of the things that it enables, which basically means more of everything. So the applications that we’ve generally seen on the blockchain so far generally have to do with finance and there’s good reasons for that. Because they like existing centralized financial systems are relatively terrible.

Which feature of Ethereum 2.0 upgrade is the most important for you and why? Share your opinion in Twitter!