Darryn Pollock
Coinbase is adding another cryptocurrency to its stable, Ethereum Classic, which has helped the coin jump over 20 percent 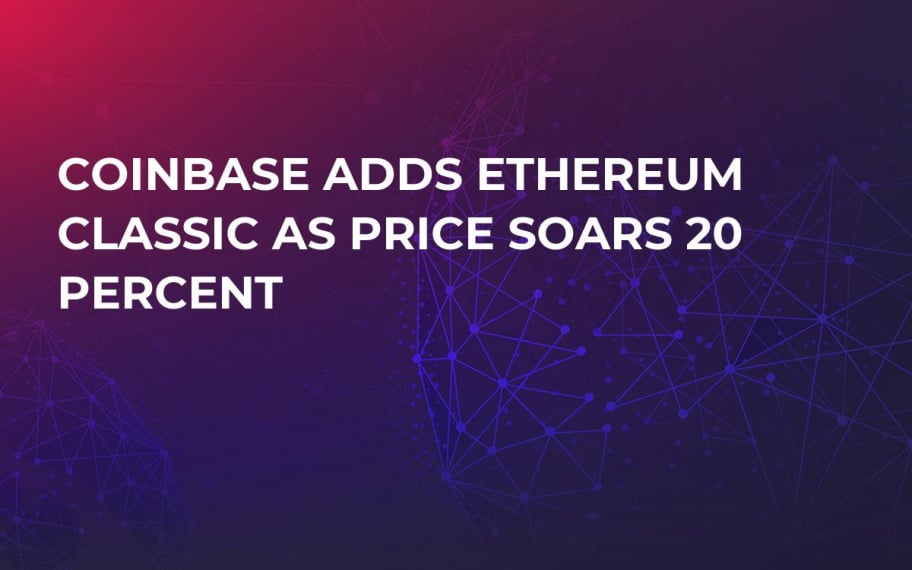 Coinbase, the biggest cryptocurrency exchange in the US, and one of the bigger ones globally, has decided to add another coin to its stable. The addition of Ethereum Classic as its fifth offering also helped the coin jump in price as much as 20 percent.

The Ethereum Classic price spike from around $13 to over $16 in the hour after the news was announced.

Like many cryptocurrencies out there today, Ethereum Classic is an offshoot of the more widely known Ethereum digital currency. It was created in 2016 by a faction of developers who objected to a modification of the original cryptocurrency.

It is currently the 18th most valuable digital currency and its market cap of approximately $1.5 bln is dwarfed by that of Ethereum ($53.3 bln) and of Bitcoin ($117.8 bln).

Coinbase has always had a big sway in the markets because of its major following and client base. When it decided to add Bitcoin Cash to its offerings, there was an equally, if not bigger, surge for that cryptocurrency.

There have been rumors circulating about a new asset being added, but not many had much insight into the announcement of Ethereum Classic, as there were no signs of any insider trading before this announcement.

Coinbase, which currently offers four digital currencies (Bitcoin, Bitcoin Cash, Ethereum and Litecoin) says it is working on the technical integration for Ethereum Cash, and its launch will occur in the near future:

“As part of this process, customers can expect to see public-facing APIs and other signs that the asset is being added. When we reach the final testing phase of the technical integration, which we expect to occur over the next few months, we will publicly announce a launch date for trading via our blog and Twitter.”

Coinbase said it took measures to ensure insiders did not have an early opportunity to trade on the news, which is what critics say occurred when the company added Bitcoin Cash to its platform.

“We followed our public process for adding new assets to Coinbase. Also, any personnel at Coinbase who were aware of the company’s plans to add Ethereum Classic were subject to a trading blackout,” the company said in the blog post.