Bulls Push Bitcoin Price to $11,250, But Next Week is Uncertain

Dmitry Cake
Return of the King: Bitcoin reaches $11,250 and increases dominance in a bullish market. 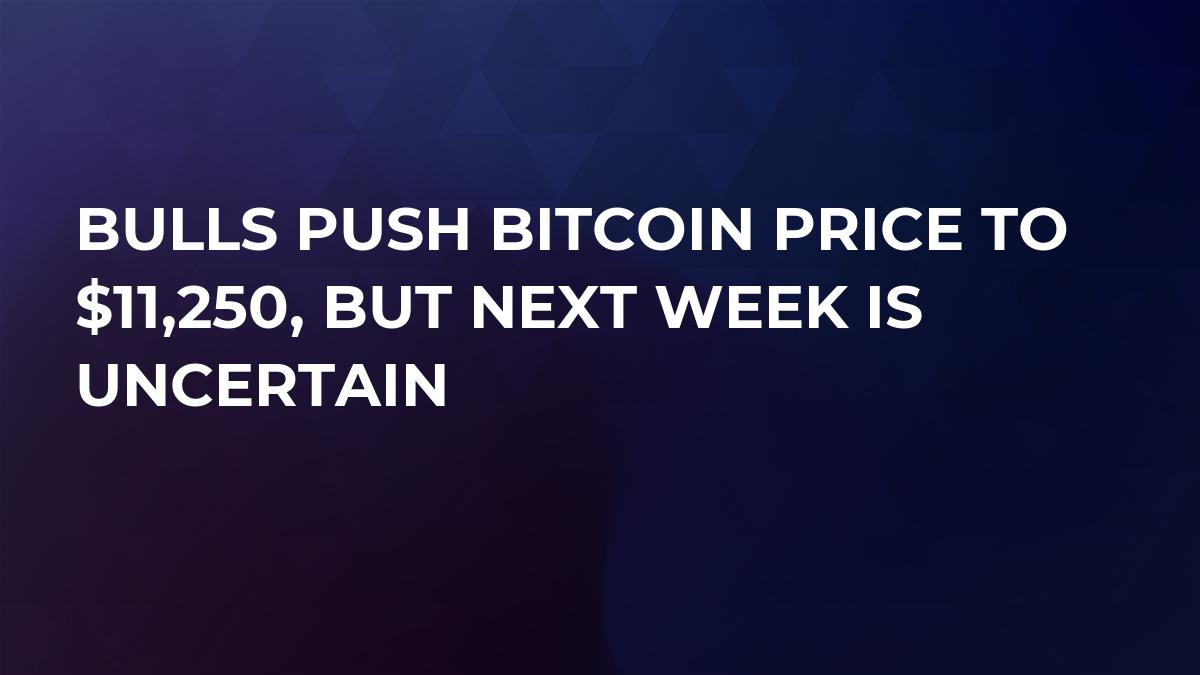 Over the weekend, a daring bullish trend prevailed on the cryptocurrency market. Bitcoin’s price continued to rise, reaching up to $11,250 on Saturday, while the total capitalization of all assets exceeded half a trillion for the first time in February, reaching a maximum of $520 bln. Bitcoin dominance continues to grow- by Monday it was 37.2 percent, which is only slightly less than the percentage seen at the beginning of January.

The market seems to have returned to the time when inexperienced investors were ready to believe in perpetual growth. However, we urge readers not to be deceived. Despite the positive mood prevailing for the moment, this time the path to new heights promises to be a circuitous one. Giving evidence of this outlook, by Monday the top 10 coins turned red. For most assets, the rollback from the previous day was about four percent, though Bitcoin and Bitcoin Cash look slightly better than the rest.

Among high-profile events and news, only the completion of Litecoin’s hard fork deserves attention. Now, Bitcoin’s younger brother has its own offshoot with a “Cash” suffix. Despite criticism from Charlie Lee, the Litecoin Cash team managed to gain some sympathy from the crypto community. Part of that comes from a well-designed and informative website that answers most questions about the hard fork. Time and investor support will determine the future of the project, and the CryptoComes team, as usual, will continue to monitor the situation.

Having conquered the mark of $11,250 on Feb. 17, Bitcoin was compelled to take a step back to refuel. Support was found at $10,130, formed by a strong 0.382 Fibonacci retracement. Further on, bears met with powerful resistance, as evidenced by the dragonfly doji candlestick on the four-hour chart. Thanks to the efforts of buyers, Bitcoin is still trading in the upper range of the ascending channel.

The important large-volume resistance level of $11,600 is still ahead. Depending on the nature of the price movement, it may coincide with the boundary of a long-term descending channel. If the price can overcome it, the next target is the $12,000 mark, indicated by two Fibonacci harmonies, as well as the mirror level. Taking into account the strong resistance, it is reasonable to partially book profits close to $11,600. In an adverse scenario, Bitcoin may re-test the $10,130 level, and then test the lower boundary of the two-week ascending channel.

On Saturday and Sunday, Litecoin was not able to break out of the $215-$230 range. This confirms our theory that most people who wished to acquire the cryptocurrency before the hard fork have already done so. Now, the fork is completed and further price movement is of great interest. On the one hand, LTC is forming the technical figure “bullish flag” with a target around $285, which finds additional confirmation in the form of a 2.618 Fibonacci extension target level.

On the other hand, given the uncertain situation of Bitcoin right now, it would be somewhat arrogant to expect an encore of such rapid growth. Based on our experience monitoring the prices of coins that have recently had a fork, we think the likeliest scenario to be a gradual correction toward the lower boundary of the descending channel (the $195-$205 range). We also take note of the decreasing trading volumes. In case of negative BTC development, there is a possibility of testing the lower resistance levels, primarily $185. At the moment, we advise readers to refrain from active Litecoin trading.

By early Monday, Ripple is trading at $1.10, rolling back from $1.20 to follow Bitcoin. The price is feeling pressure from the proximity of the upper boundary of the descending channel and could not gain a foothold above it. Nevertheless, XRP is slowly (for now) but surely moving upward, while accumulating a significant trading volume. This is a characteristic of the coin that we have gotten used to.

The nearest growth targets are $1.30 and $1.40. The first one is indicated by the trading volume profile, the second- by the mirror level marked in blue. In case of negative developments, support coincides with the fair price value for the period since the previous powerful correction- we are talking about the level of $1.00. We recommend that our readers continue to hold current long positions.