Women of Crypto at the Crypto Invest Summit: Separate but Hopeful

Katya Michaels
Crypto events are beginning to invite more women speakers, but tend to feature them in separate Women in Crypto panels 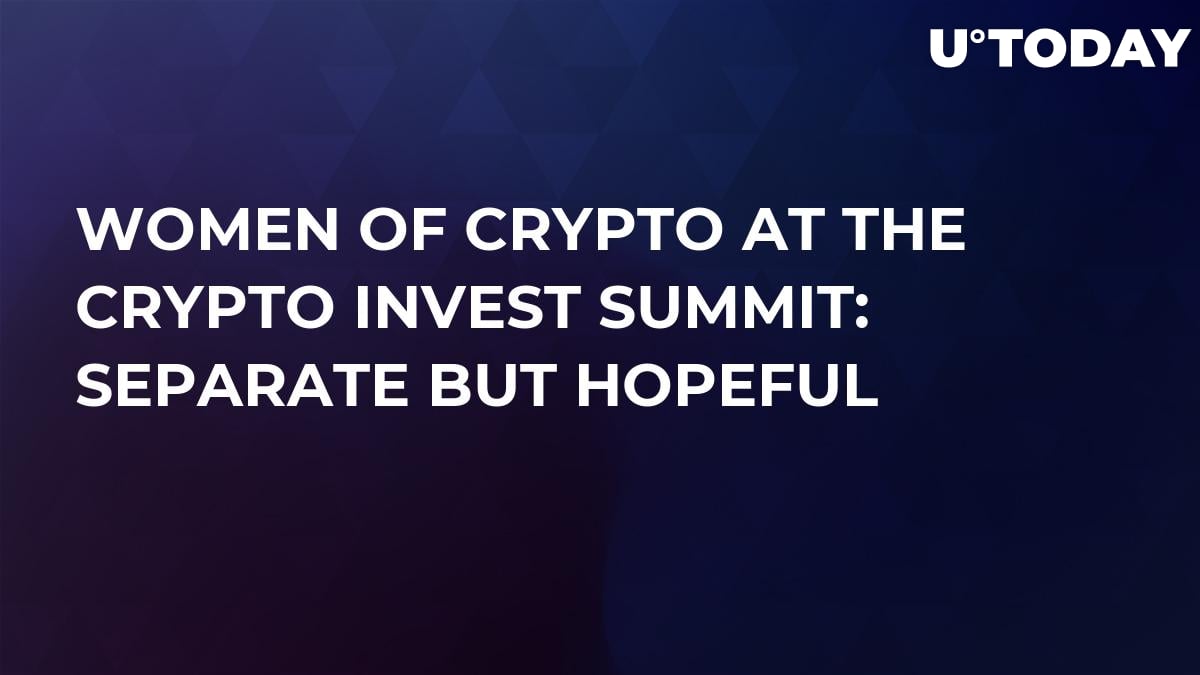 In the early days of crypto community conferences, the number of women attending and especially speaking was notoriously low, but in the last couple of years, every major crypto and Blockchain event diligently features a Women in Crypto panel. The second Crypto Invest Summit, which took place this week at LA’s Convention Center, was no exception; indeed, the conference went all out for a full Women of Crypto track.

Women of Crypto as opening act

It’s worth noting, however, that the Women’s track took place on the day before the actual conference began. To avoid confusion, the event’s agenda page ran the following missive in red capitals: “No conference and expo on Monday. Conference and expo days are Tuesday and Wednesday. Monday is Women of Crypto pre-conference track and kickoff party.”

As one would expect under such circumstances, the audience for the track was a fraction of that which was expected to attend the summit proper. On the upside, just about half of the crowd comprised men, something the organizers noted as being a very encouraging sign of support from across the aisle.

Speaking of the aisle, another statistic of interest: all 17 panelists in the Women of Crypto track were female, while on the Main Stage over the next two days women made up roughly 20 percent of the speakers. In an earlier interview with U.Today, Crystal Rose–who was featured both in the Women’s track and on the Main Stage–mentioned her disappointment with the way conference organizers tend to structure panels:

“[Often], there are several panels with only men and one panel with only women. I think it would be interesting if we included men on a Women in Blockchain panel to get their perspective, to understand the challenges from their side, to empower them to bring more women into this space. Events created specifically for women in the industry are helpful for us to make connections, but we also have to take the next step, which is integrate.”

While the exclusion of men from the Women of Crypto track was a missed opportunity to foster integrated and inclusive discourse, it did give the panelists freedom to delve deep into subjects that may not have commanded the full attention of the “usual” conference crowd.

Many panelists felt that the possibilities and opportunities promised by Blockchain technologies are especially urgent for women, people of color and residents of developing countries who are left outside the global financial system. During the Blockchain for Good panel, speakers discussed how Blockchain and cryptocurrency can help the unbanked millions directly, but can also provide much-needed transparency to non-profit initiatives that serve domestic and international relief causes.

The Interactive Marketing panel advised the audience not to underestimate the value of grassroots networking and to keep in mind the vital importance of community not only for the spirit, but the very functionality of Blockchain. Unless the community is informed and involved in network maintenance, unless cryptographic technologies become accessible to any demographic and level of understanding, unless diversity exists not only among users but also among developers, Blockchain cannot become a truly scalable, global phenomenon.

Opening the Full Spectrum Blockchain discussion, Crystal Rose recalled that the Internet began as a space where users could interact anonymously, and only the introduction of social networks and online shopping began tying an enormous amount of personal data to our digital profiles. Today, Internet usage had come full spectrum to focus on the importance of privacy, sovereignty, and data ownership. However, sovereignty can’t be reclaimed unless there is wide-scale adoption, and adoption won’t happen until simple, easily manageable tools are available to the public.

The Blockchain ecosystem is evolving: the next stage will prioritize developing decentralized applications, improving usability and building community. According to the panelists of both the Women’s track and the Main Stage, the bear market is the best time to focus on building real, working, sustainable products and launch new projects.

One of the main recurring themes of discussion during the Women of Crypto track, echoed over the next two days by the panels on the Main Stage, was the role of effortless user experience in driving Blockchain adoption. When crypto technology will run in the background of applications without requiring the user to understand the intricacies of the technology, the barrier to entry into the space will be removed.

The Internet is moving from the age of information to the age of experiences, and human beings are geared for gamification: hitting targets, checking off boxes, and collecting rewards. An intuitive user experience on the surface and the right incentive structure in the framework will help applications reach a greater audience.

At the conclusion of the event, a gentleman from the audience addressed the final panel with a question: “Why isn’t this part of the Main Stage program? I’m taking notes here and more people should see this. I hope it’s being recorded?” He was reassured that it was, in fact, recorded and would be available online. The panelists and organizers thanked everyone for coming out a day early, encouraged the men in the audience to continue supporting women in the space, and treated the question of the track’s placement outside the main Crypto Summit program as rhetorical, for now.