Will John McAfee's Wrath Fall on Those Who Tried to Assassinate Him? 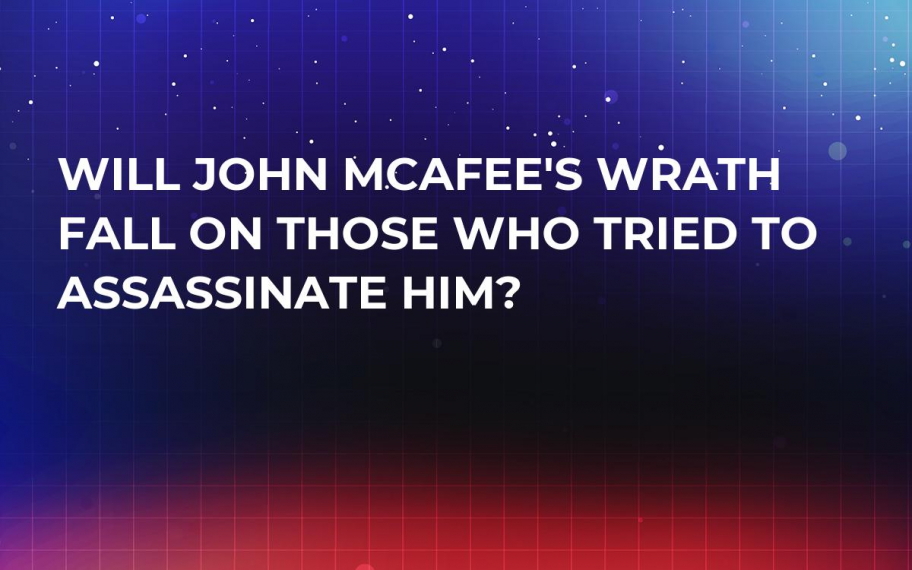 John McAfee, the founder of the antivirus software eponymous with his name, has alleged that he was poisoned by ‘incompetent enemies.’

McAfee has been associated with many cryptocurrency projects of late, including much-debated ICOs, and is no stranger to controversy.

In a series of tweets McAfee apologized for his three-day absence on account of being unconscious. He tweeted,

“I apologize for my three-day absence but I was unconscious for two days at the Vidant Medical Center in North Carolina and just woke up. My enemies managed to spike something that I ingested. However, I am more difficult to kill than anyone can possibly imagine. I am back.”

John McAfee is no stranger to controversy and there has been a string of bizarre incidents attached with him.

In September of 2017, McAfee was reported to have gone on a naked shooting spree. The Daily Mail reported that incident,

“The antivirus software inventor started firing bullets into the walls and ceiling of his Tennessee home when his aggressive dogs started barking wildly.”

At that time he reportedly told Newsweek that he was being stalked by the government of Belize and claimed that they wanted to kill him because he had hacked in and stole ‘secret government information.’

McAfee who is a Libertarian and has in the past run for the presidency of the US Libertarian party has had a chequered past in Belize, the tiny Central American country.  In 2012 the police in Belize were on the lookout for McAfee who declared him a person of interest in the murder investigation related to Gregory Faull, a US person who was McAfee's neighbor.

Erratic behavior is not uncommon

McAfee who has been known for his strange mannerisms. In 2012, Joshua Davis writing for the Wired described the time he interviewed McAffee who held a gun to his head and played a round of Russian roulette.

Davis wrote about McAfee's erratic behavior, “I know we don’t,” he says, the muzzle pressed against his temple. And then he pulls the trigger. Nothing happens. He pulls it three more times in rapid succession. There are only five chambers.”

The same article also described his arrest in Belize on the accusation of selling methamphetamine. In an interview about his life in Belize to Business Insider, McAfee shed some light on the events that transpired.

He describes his interactions with the authorities in the Central American nation in following words: “They shot my dog in front of eyes, destroyed a half million dollars worth of my property, subjected me to indignities, and arrested me on false charges which were dropped a few hours later.”

“The following day, I was contacted by the same representative that had originally asked for the $2 mln dollars and who now asked whether or not I had changed my mind. I told him to f--- off.”

McAfee has his political beliefs and he may not be wrong when he says he is being persecuted for holding them.  His most recent troubles have been with his home country of the US.

He claims that he is on the run from the Securities and Exchange Commission (SEC), which has forced him to go into hiding.

A video has McAfee narrate his ordeals with the US regulatory body. He claims that he went underground after he came under siege at his Tennessee home. His wars with the SEC, where he questioned the regulatory powers of the US agency over cryptocurrencies such as Ether may have earned him powerful enemies.

In tweets, McAfee has promised his wrath for the perpetrators.

He tweeted, “And for those who did this- You will soon understand the true meaning of wrath. I know exactly who you are. Youth (sic) had better be gone.”

About the author
Shivdeep Singh

Shivdeep Singh is a journalist specialising in cryptocurrencies, blockchain and other emerging disruptive technologies. He has been featured in several leading publications and is focussed on high growth markets in the Asia-Pacific particularly India and Japan. His other interests include micro-finance, risk management and personal finance and he has written on these topics for more than a decade.