David Dinkins
The G20 was slated to consider new global regulations on Bitcoin and other cryptocurrencies this week, but regulatory head said “no.” 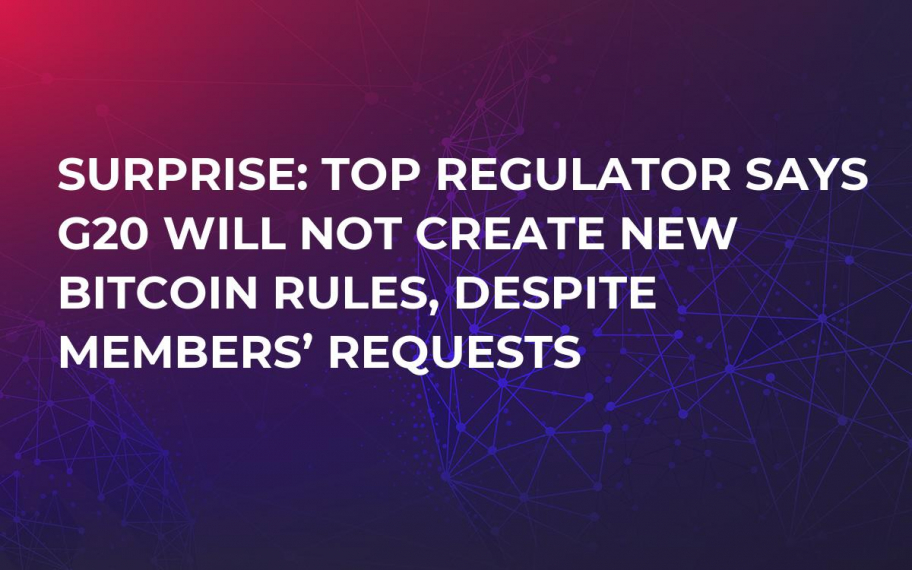 In surprise move, the regulatory arm of the G20 has decided not to impose additional rules on Bitcoin and other cryptocurrencies at this time. Despite calls from France, Germany and Japan asking for the G20 to discuss cryptocurrency regulation at its next meeting this week, the group’s top regulator said “no.”

France and Germany had initially made plans to call for new global regulations on Bitcoin and cryptocurrency. The French finance minister told reporters earlier this year:

“We will have a joint Franco-German analysis of the risks linked to bitcoin, regulation proposals and these will be submitted as a joint proposal to our G20 counterparts at the G20 summit in Argentina in March.”

“We have a responsibility towards our citizens to explain and reduce the risks.”

In a separate statement, Japan announced last week that it would be asking the G20 to discuss and create regulations to prevent cryptocurrency from being used for money laundering.

Mark Carney is the governor of the Bank of England and currently serves as the head of the G20’s regulatory arm, the Financial Stability Board (FSB). Carney, himself a noted Bitcoin skeptic, said the group will focus on reviewing existing global regulations rather than creating new ones. Part of the reason for the FSB’s decision is that there was little consensus for “radical action” on Bitcoin, according to Reuters. Additionally, Carney pointed out:

“The FSB’s initial assessment is that crypto-assets do not pose risks to global financial stability at this time.”

Reuters notes that the global crypto market, even at it’s nearly $800 bln peak in December 2017, comprised less than 1 percent of global GDP.

The Group of 20 (G20) is comprised of the top twenty economies in the world (with the EU counted as a single economy). At G20 summits, finance ministers and central bankers from each member state meet to discuss economic policy. Periodically, the actual heads of state of each member nation also meet together. The G20 represents 85 percent of the world’s total GDP and 67 percent of the Earth’s population.