SHIB Will Be Burned via Amazon, Elon Musk May Get in Trouble with SEC and DOGE, Terra Launches New Blockchain: Crypto News Digest by U.Today 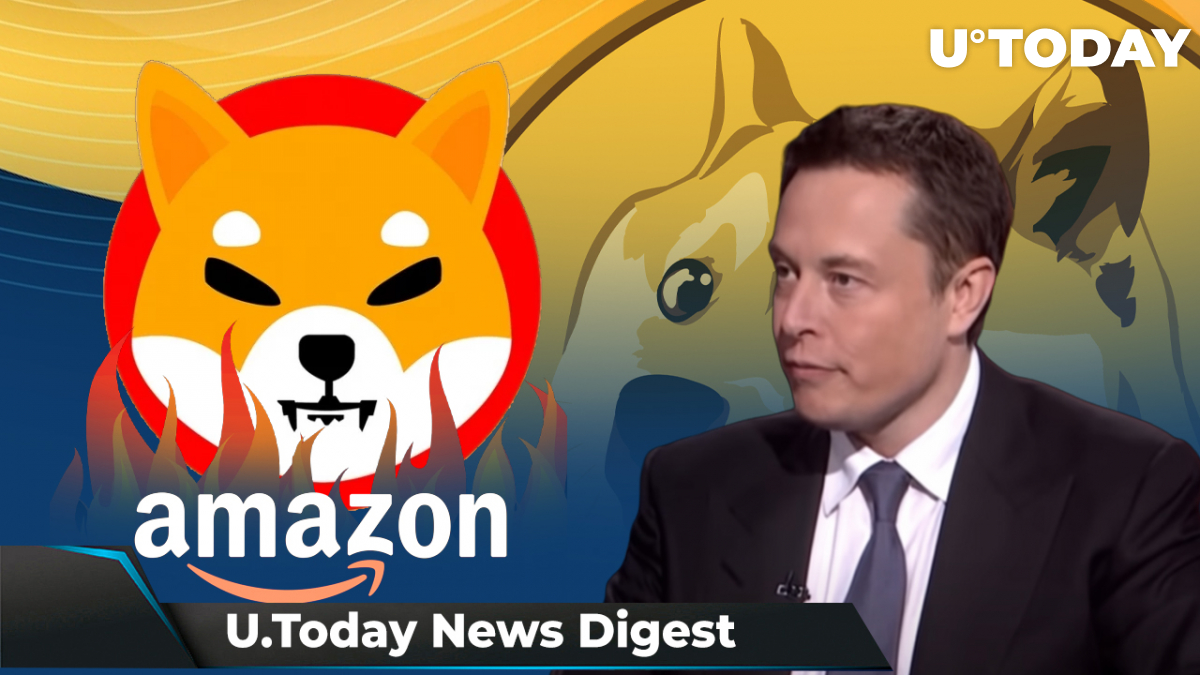 Don’t miss any events in the crypto industry with the top four news stories over the past weekend presented to you by U.Today.

SHIB will now be burned via Amazon

On Friday, May 27, the Twitter account of Travis Johnson's SHIB burn games announced that SHIB Super Store, a regular canine coin burner, has been added to the Amazon affiliate program. From now on, the shop intends to use from 1 to 20% of profits from it to buy SHIB, which will be burned every Sunday. At the moment, the total amount of tokens burned by the project stands at 2,036,128,785 SHIB. To reach such an impressive result, SHIB Super Store used part of its income from advertising in games, selling SHIB-branded merch and a SHIB-themed YouTube channel.

Elon Musk gets warning about Dogecoin and SEC from CryptoLaw founder

John Deaton, founder of CryptoLaw, is concerned about Elon Musk frequently promoting Dogecoin on his Twitter account. Thus, Deaton decided to warn the Tesla boss about the potential danger of such activity, noting that it may get him in the same legal trouble as Ripple and XRP token. It all started with Twitter user @JayBlessed901 complaining about the unfairness of the SEC’s long-lasting suit against Ripple, while Musk freely drives the DOGE price up with his tweets. The complaint caught the lawyer’s attention as he suggested that the SEC might sue the centibillionaire for that. According to Deaton, Gensler and the SEC may identify Dogecoin as an investment contract with Musk and his companies.

Terra, a collapse-surviving project, announced reaching a new milestone: producing Block 1 of the brand new Terra blockchain. Now, holders eligible for the LUNA airdrop can view their wallet balances on the new chain. On its official Twitter account, the team behind the project wrote that the event marks “the next chapter for the Terra community,” in which Terra’s potential knows no bounds. However, the project’s optimism is not shared by everyone. Billionaire investor Mark Cuban criticized the new Terra blockchain ahead of its launch, with Dogecoin’s Billy Markus and BitGo CEO Mike Belshe doubting Terra’s future success. Hartmann Capital’s Felix Hartmann, on the other hand, believed that the new initiative is worth watching, but it will also require a lot of grinding on the part of the founders because they will no longer have billion-dollar market valuations.

Cardano has potential to become scarce asset like Bitcoin

The Cardano community-focused Twitter user dubbed @cardano_whale states that ADA may follow a BTC-like path and become a highly scarce asset at some point in the future. He believes that Bitcoin got its dynamics right because of its fair distribution, its price staying low long enough to allow many to buy and its fixed supply. Cardano, like Bitcoin, has a finite supply limit, with only 45 billion ADA ever to be created over the coin's existence. According to CoinMarketCap, there are currently 33.82 billion ADA in circulation, accounting for 75% of the maximum supply, with 34.27 billion ADA created so far. However, the user advises not to load up on ADA due to continued unfavorable market conditions and asks that everyone be prepared for “possibly months of double digit negative returns.”