Valeria Blokhina
Read U.Today’s news digest to not miss out on the latest crypto news! 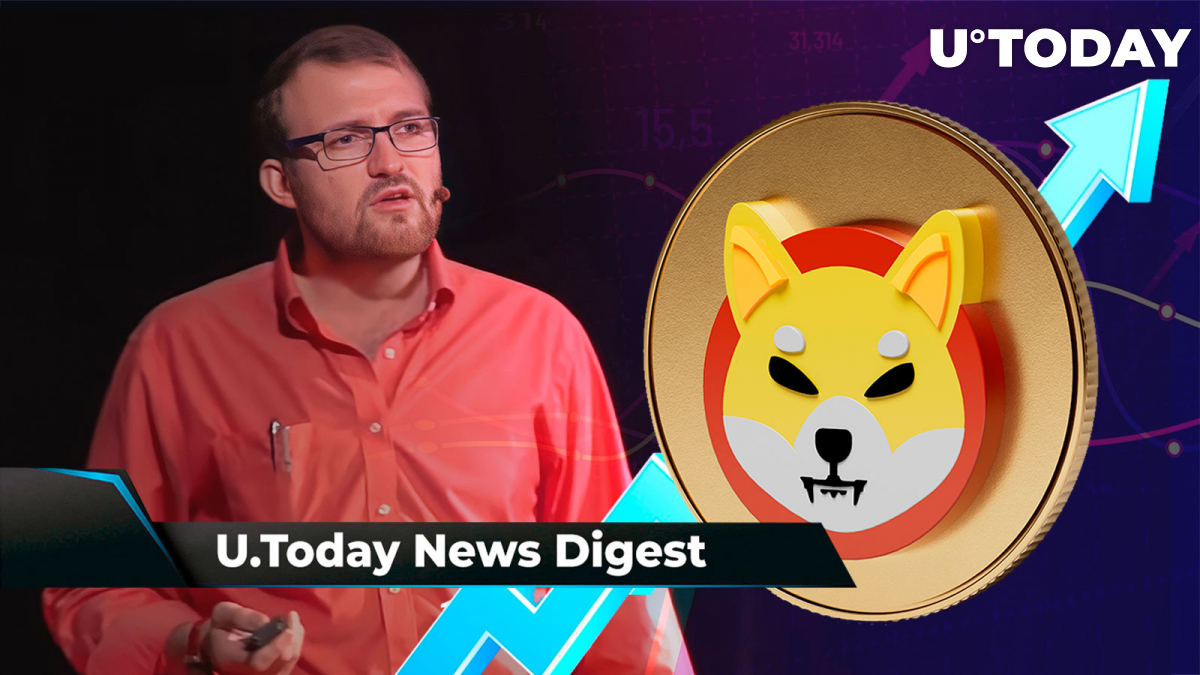 The past weekend brought lots of significant updates in the crypto industry. Let’s dive deeper into the details with U.Today’s top four news stories.

The SHIB community celebrates another milestone reached by its beloved canine coin. The number of Twitter followers of Shiba Inu's official account hit an eye-popping 3.4 million, adding more than 700,000 followers since February. Thus, Shiba Inu caught up with its rival meme crypto, Dogecoin, that also has about 3.4 million Twitter followers. In addition to that, Shiba Inu's holder count continues to grow. According to WhaleStats, the total number of SHIB holders has risen to 1,182,817, suggesting long-term interest in the asset. Another win that SHIB achieved last week was flipping FTT in the biggest holdings for the top 100 ETH whales, pushing it to fourth place.

Charles Hoskinson responds to question about his “claiming to be Satoshi”

Crypto YouTuber Alexander Lorenzo offered to Charles Hoskinson’s followers to suggest questions to be asked of the Cardano creator during his potential interview. One of them, asked by an anonymous Twitter user, concerned Hoskinson’s alleged claims to be mysterious Bitcoin developer Satoshi Nakamoto. Without waiting for the interview to happen, Charles rushed to respond to the allegations, advising the user not to believe everything he or she reads on the Internet or in books about the history of crypto. He also denied ever claiming to be the BTC creator, adding that when Bitcoin was released back in 2009, he was only 20 years old.

Meanwhile, Hoskinson might take part in the new music video by Snoop Dogg and his son. On Friday, Champ Medici tweeted that they would love to have the IOHK CEO on their project, to which Hosk responded, “let’s figure it out.”

Kraken, one of the top cryptocurrency exchanges in the U.S. based in San Francisco, has announced that it is expanding its support for Dogecoin and will list its future contracts. The futures contract derives its value from the underlying cryptocurrency, Dogecoin in this case, and allows one to gain exposure to the cryptocurrency without actual ownership. Trading is set to begin today, June 20. Kraken is also set to offer futures contracts for Tron's TRX and Fantom's FTM. In July 2020, Binance announced the launch of perpetual DOGE/USDT contracts on its derivatives platform, Binance Futures.

Nassim Taleb, Lebanese-American mathematician and philosopher, urged investors to ignore those Bitcoiners who cherry-pick comparative returns for Bitcoin. When asked about the king crypto’s poor performance, BTC enthusiasts typically state that if you zoom out far enough, the cryptocurrency's returns are still huge. However, as Taleb points out, the average purchase price of Bitcoin in circulation is currently at $23,430. Meanwhile, according to CoinMarketCap, BTC is currently trading at $20,601, which basically indicates that the average buyer is in the red. Taleb also noted that the average purchase price for other major assets was much lower than their current market price.