Cyril Gilson
“We can confirm that the Venezuelan government is intending to use the NEM Blockchain”:Pedro Gutierrez 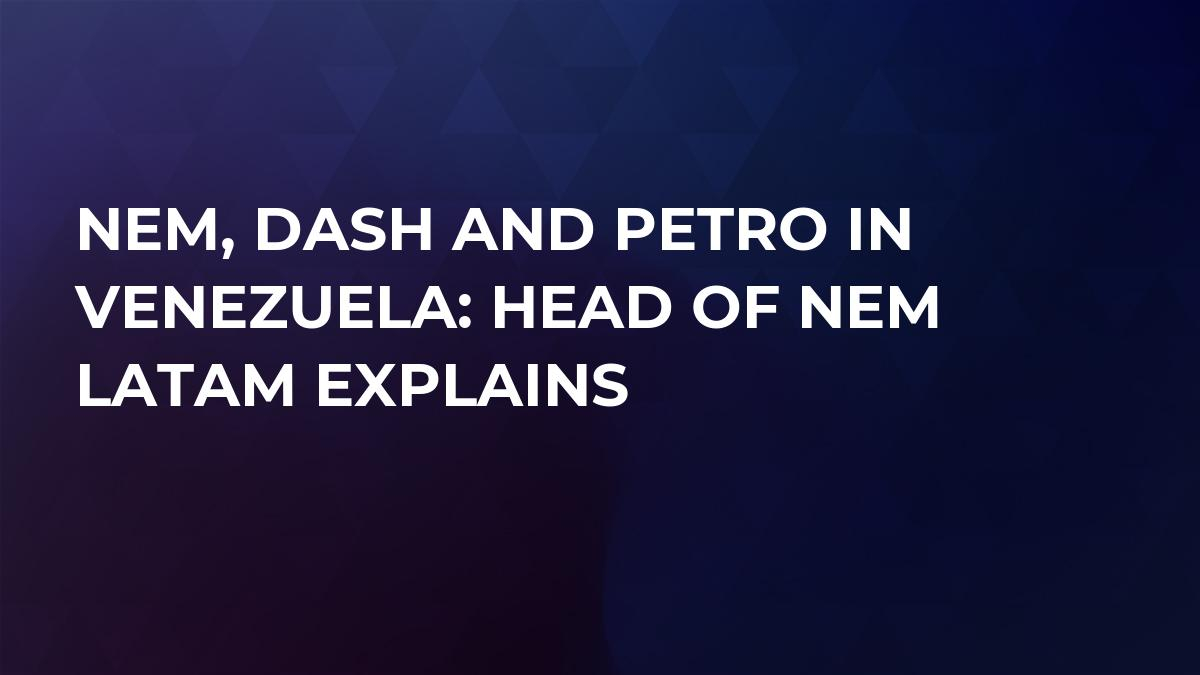 Is the Venezuelan government using the NEM platform for its oil-pegged Petro cryptocurrency? Head of NEM Latin America Pedro Gutierrez answers the question in a first-hand exclusive interview.

It’s been reported that the controversial Venezuelan cryptocurrency Petro was officially released as an asset on NEM’s Blockchain rather than on Ethereum’s Blockchain, with the total supply capped at 100 mln Petro.

Pedro Gutierrez answers and explains why the NEM platform, its competition with Ethereum and specifics of doing business in one of the most promising regions on Earth.

We asked Pedro Gutierrez about NEM’s involvement with the Venezuelan government and the platform’s perspectives in Latin America and globally. As the Latam leader of NEM.IO foundation, Gutierrez sees his major task in s publicizing Blockchain technology and NEM in industry, commerce, education institutions and government in Latin America and Spain.

Cyril Gilson: Is the NEM platform used for the oil-pegged Petro cryptocurrency?

Pedro Gutierrez: We can confirm that the Venezuelan government is intending to use the NEM Blockchain. We can’t comment on how it works as it’s not a project we’re actively involved with. The NEM technology is freely open to any individual or organization that wants to use it. The NEM Foundation abstains from political endorsements.

CG: Have the NEM developers been involved in developing the Petro?

PG: No, our developers are not involved with this project. NEM’s technology is easy to use and to build applications upon while having a near perfect record for being secure. A person reasonably skilled can work on the NEM platform within a day.

It does not take much to learn how to use NEM’s technology. So it is therefore easy to imagine why the Venezuelan government wants to implement using NEM technology.

CG:  How big is the NEM community in Venezuela?

PG: The NEM community in Venezuela is growing steadily. We have raised significant interest in the academic and business sector. NEM is the best technology to make this happen because our platform is plug n play for business- making it the easiest and safest Blockchain network for enterprises and developers.

CG:  When the story of NEM started in Venezuela and what are the major achievements?

PG:  NEM started in 2014 and its tech is widely adopted by hundreds of companies all over the world because the platform is so easy to use. A huge portion of global industries such as the financial sector, insurance, healthcare, pharmaceuticals, supply chain management and the entertainment industry sectors need a cost-efficient way to manage and authenticate data in an immutable and secure way. There’s no question that these companies will play a vital role in incorporating Blockchain technology in the next few years.

Venezuela is an attractive region for NEM to expand into. NEM has hubs in Malaysia, Australia, Japan and New Zealand. All of the NEM hubs are key to expanding visibility and opportunities where the NEM team can engage with the public, do training on our platform, and support startups who are interested in Blockchain.

In May, we opened an embassy in Venezuela and this is critical to providing Venezuelans with quality resources and training for developers getting into blockchain. We are hopeful that adding Blockchain services to the list of Venezuela industries can help the economy and people. In addition to this, we hold meetups to help educate the Blockchain community on the benefits of building on NEM’s ecosystem.

CG:  Are other Latam governments considering something similar?

PG: NEM is an open-source platform so any government, individual or company can build on NEM. At this time, I’m not aware of other LATAM governments building on the NEM Blockchain.

CG: What advantages and disadvantages of the Petro do you see?

PG: I don’t have a comment on this. I’m working on other projects, though, that I’m happy to talk about. We have some projects that at the moment we can not announce since we have signed NDAs, but I can tell you that they are in the financial sector, in Mexico and Colombia. We are also working on projects of agricultural traceability, electricity for rural areas among others that we will announce very soon.

CG: Is there a competition between Dash and NEM in Venezuela?

PG: Dash is one of the most innovative and interesting Bitcoin forks, but NEM does not compete with Dash since Dash is a transactional platform and NEM is a platform of Blockchain Services. So we are not in competition with Dash because the two platforms are designed for different purposes. We have a good relationship with the DASH team and are supporters of their community, in several countries of LATAM, we have participated in events together.

CG:  What's next for NEM in LATAM?

PG:  Education and training are critical to helping ensure the future of Venezuela to remain competitive and thrive. NEM is supporting LATAM by building Blockchain hubs, offering training to developers at all levels, partnering with companies in all industries, and building a strong community to help keep the NEM ecosystem healthy.

It’s an alternative to doing an ICO and something that could be beneficial to many people in LATAM.