NEM’s Latin America Head: “In the Next Bullish Wave We will Surely See NEM in First Positions”

Cyril Gilson
“We have the full confidence that the Blockchain of NEM has the best performance in the market”: Pedro Gutierrez 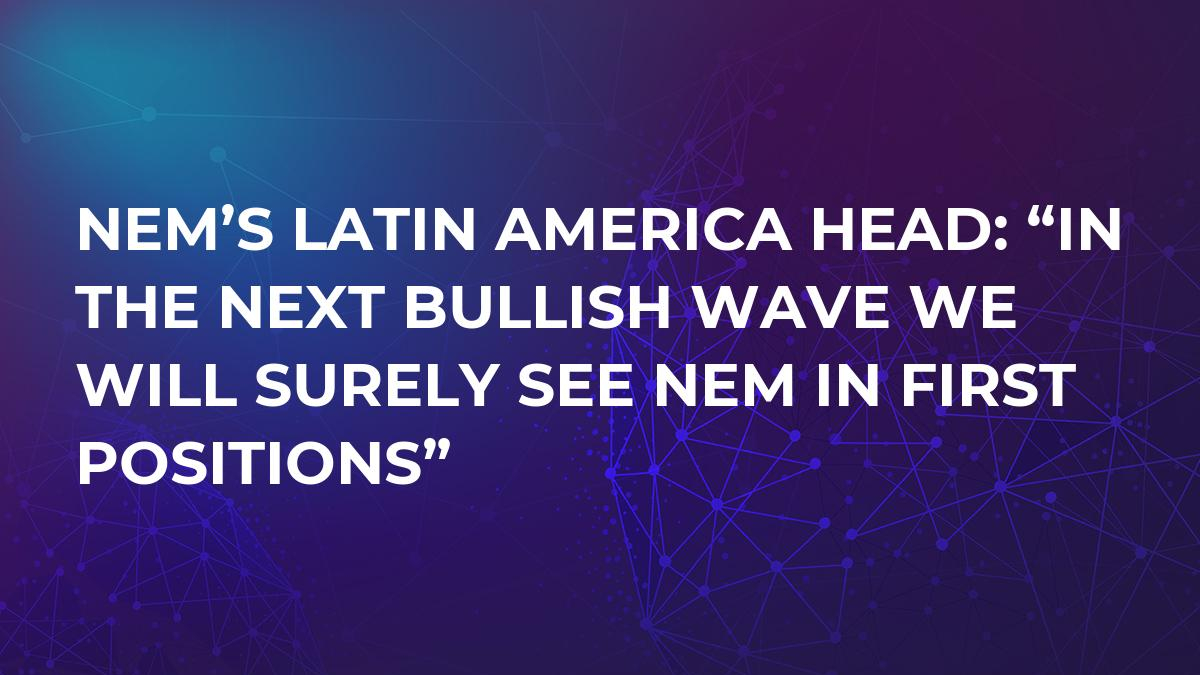 Head of NEM Latin America Pedro Gutierrez on the strengths of the NEM platform, its competition with Ethereum and specifics of doing business in one of the most promising regions on Earth.

Systems Engineer by education, Pedro Gutierrez has a long career in business entrepreneurship in the hi-technology area, he participated in the boom of dot com as a category manager in deremate.com, the first online auction site in Latin America- 2001 to 2003.

He participated in a pioneer online auction project in Latin America, then created the first online-based dental franchise in Venezuela that has become highly successful also in the neighboring Colombia. In 2016 he founded SynergyCriptoAdviser, a company that offers cryptocurrency consulting and training services.

In 2018 he was named the Latam leader of NEM.IO foundation and sees his major task in s publicizing Blockchain technology and NEM in industry, commerce, education institutions and government in Latin America and Spain.

Cyril Gilson: How big is the NEM Latin America community, what are their main centers, who are the main players?

Pedro Gutierrez: Latin America has a population of almost 700 mln people, which makes it one of the most important regions in the world for the adoption of new technologies. We have opened 12 countries in only five months of operation, among which we must highlight the actively growing communities in Argentina, Mexico, Brazil and Colombia. Our main competitors in the region are Ethereum and Hyperledger.

CG: How the decisions are being made in your community?

PG: The decisions within the NEM foundation are made by the members of the council and the founding members evaluating all the positive or negative repercussions that such actions may generate for the community in general. Members of the NEM council are elected by the community every two years, and the destination of community funds is defined by public votes made by the global NEM community.

CG: What is a regulatory climate in Latam like, as it comes to the cryptocurrency regulation, and what countries are moving ahead of others? When the regulatory clarity can be achieved?

PG: I believe that the regulatory climate in Latin America is very imprecise, if not null and this is very much tied to the ignorance on the part of the governments of these technologies operate. This does not mean that all countries are equal in this regard.

There are countries like Mexico that have already taken a big step with the approval of fintech law for the legal use of certain cryptocurrencies within the country, and cases like those of Colombia where the president-elect for the next 4 years mentioned that he would implement technologies such as the Blockchain to avoid the evasion of national taxes.

I believe that these steps, although small considering the size of the ecosystem, are just the beginning of a great technological revolution in Latin American countries that strive for more transparency.

CG: What industries in Latam have specific interest in NEM, who are you working with? What explains their interest?

PG: Currently the greatest interest has come from governments and universities in different countries, with which we are currently in a process of conceptualization of the use cases in various areas. They serve as references for problems that need to be resolved locally and that way we later arrive to their implementation. We continue with the efforts to extend the range of interest to other sectors.

We have the full confidence that at present the blockchain of NEM has the best performance in the market, guaranteeing over time its greater participation in the Latin American market.

PG: More than being different I think that Blockchain technology companies have an arduous task of showing investors the great advantages that the use of these technologies would mean without leaving aside the cryptocurrencies for their industries, the benefits in terms of automation of trust, of performance in the processes, of autonomous collection system, of machine-to-machine communication among many other things.

Naturally, it is important to reach agreements with industries and respectable investors that will show others the way thus achieving the implementation of these new technologies. We still do not have those relevant cases of use but we have seen a growing interest that is aroused by the fact that Latin American football stars like Messi in Argentina support crypto projects and stars like James Rodríguez of the Colombian team have launched their own cryptocurrency.

CG: Some people say NEM can dethrone Ethereum as the premiere smart contracts platform. What maybe the obstacle to that happening?

PG: I think it's important to bear in mind that the only competition that Ethereum brings to NEM is up to the Ether’s bigger popularity for this moment.  If you compare NEM in terms of technology as a third generation Blockchain you can not only make smart contracts, but you can do them out of the chain allowing updates of the same without having to start from scratch.

Due to its adaptability to the most popular programming languages practically any developer can start implementing NEM without delays. NEM also has a number of features that are designed so that, among many other things, the developer does not have to build everything from scratch if something doesn’t work. We know that in marketing we must work hard but we must note that we work hard to deliver the best blockchain to the community. Now we work with it to make it better known.

CG: What is the strength of NEM that is absent in other altcoins?

PG: NEM is not technology in test (Beta), it is a fully developed project in search of continuous improvement offering new and more advanced functionalities.

We have a community throughout the planet, and a defined leadership structure that allows everyone in our different regions to pursue the same ideals.

CG: Recently NEM dropped from the top 15 cryptocurrencies and Binance Coin has taken its place. When do you think NEM will jump again?

PG: In the next bullish wave we will surely see it in the first positions, we must bear in mind that the market in general is down and all the token have decreased their capital.

CG: What do you think of main competitor for NEM now? Maybe Ripple?

PG: We are focused on making our technology known, making important alliances and at the same time increasing the usability of our Blockchain and therefore our token. I believe that all these crypto and Blockchain projects have different bets and approaches rather than competing, we focus on doing well what we know how to provide cutting edge technology to more and more people.

CG: When the launch of Catapult is expected and how can it influence the crypto industry and the coins market?

PG: Although the date of the launch of Catapult is not defined, it was established that before the end of 2018 it will be available to the community. Catapult puts the Blockchain of NEM one step ahead of all existing Blockchain. In terms of impact to the industry of this advance we are sure that the best ones like to work with the best.