Microsoft’s Bill Gates: You Should Not Expect Bitcoin to Go Up 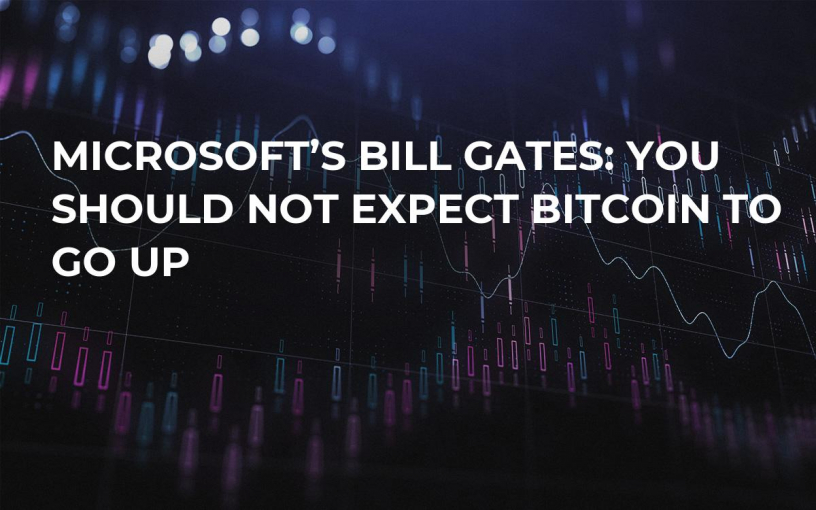 Bill Gates, co-founder of Microsoft, said Bitcoin is a “pure greater fool theory kind of investment,” calling it one of the “crazier speculative things” out there in an interview with CNBC, early on Monday:

"As an asset class, you're not producing anything, and so you shouldn't expect it to go up. It's kind of a pure 'greater fool theory' type of investment. I agree I would short it if there were an easy way to do it."

Gates, who is on the board of Warren Buffett's Berkshire Hathaway, was speaking from Omaha where the conglomerate, including Charlie Munger and Warren Buffet, held its annual shareholder meeting over the weekend.

Gates acknowledged that Blockchain technology behind the cryptocurrency did have merits. He added:

“There is some really good technology in terms of sharing databases and verifying technology, that I believe is a good thing.”

When asked how the Berkshire Hathaway, which owns $2.5 bln Goldman Sachs shares, felt about the announcement last week that the bank would add a Bitcoin trading desk, Charlie Munger, vice chairman of Berkshire Hathaway says:

Munger who has remained highly vocal about this aversion to Bitcoin and compared it to “artificial gold,” said people should not be speculating on “clever computer science” in the interview.

Despite these views, the cryptocurrency has regained nearly half its value since December of last year.  Its price rose to as much as $9,954.95 on Sat. May 5, briefly fluctuating close to $10,000 before falling back and is trading near $9,300 Monday morning, according to figures reported by CoinDesk Bitcoin Price Index (BPI).

Gates added that he received Bitcoin as birthday gift, but has since then sold it and does not hold any of the digital currency at this time.