Vaido Veek
Bitcoin and Cardano are on the triangle, Ethereum is still on the “Rising Wedge” 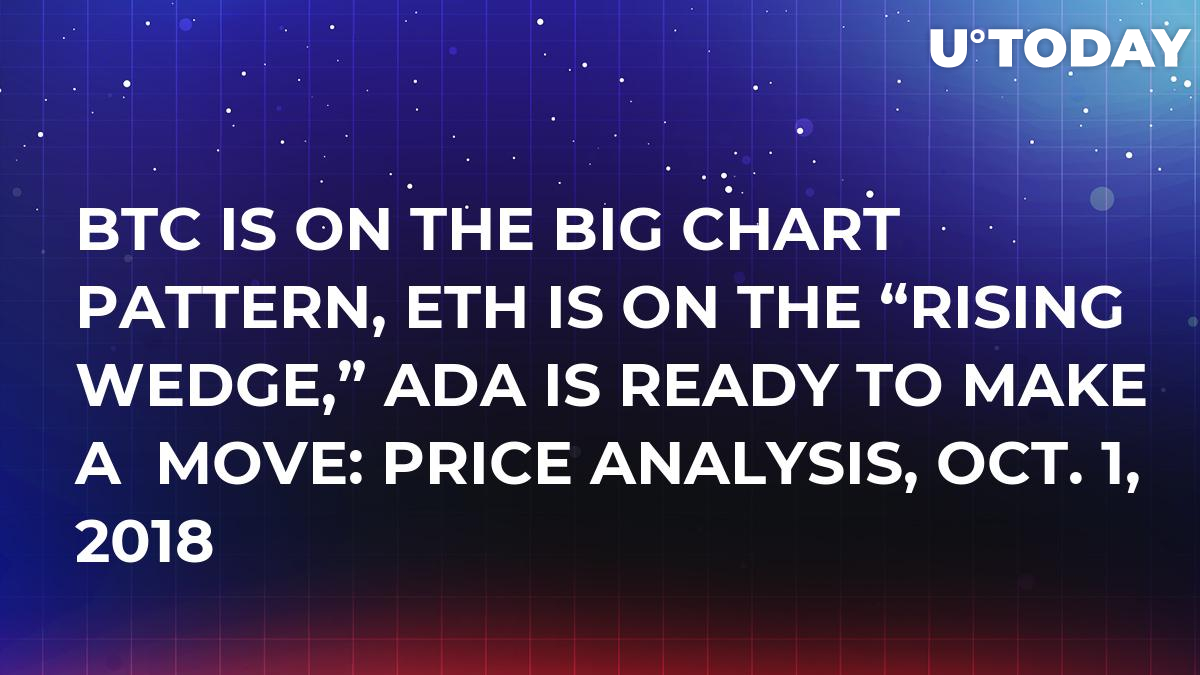 Bitcoin is on the big “Ascending Triangle”

Currently, it trades between the two blue lines. Above is the resistance at $6,767 where BTC has tried to break out several times, one attempt was successful but let's call this a fakeout. The second one is below the current price at $6,460 which works as a support. On  Sept. 26th and 27th, it worked nicely as a support and it holds that price very nicely. Over the weekend, we touched it again and got a bounce, but this time, this level is much stronger than before because in this area we had the trendline and the golden Fibonacci level 62 percent crossing area which makes this price level much stronger to break through. 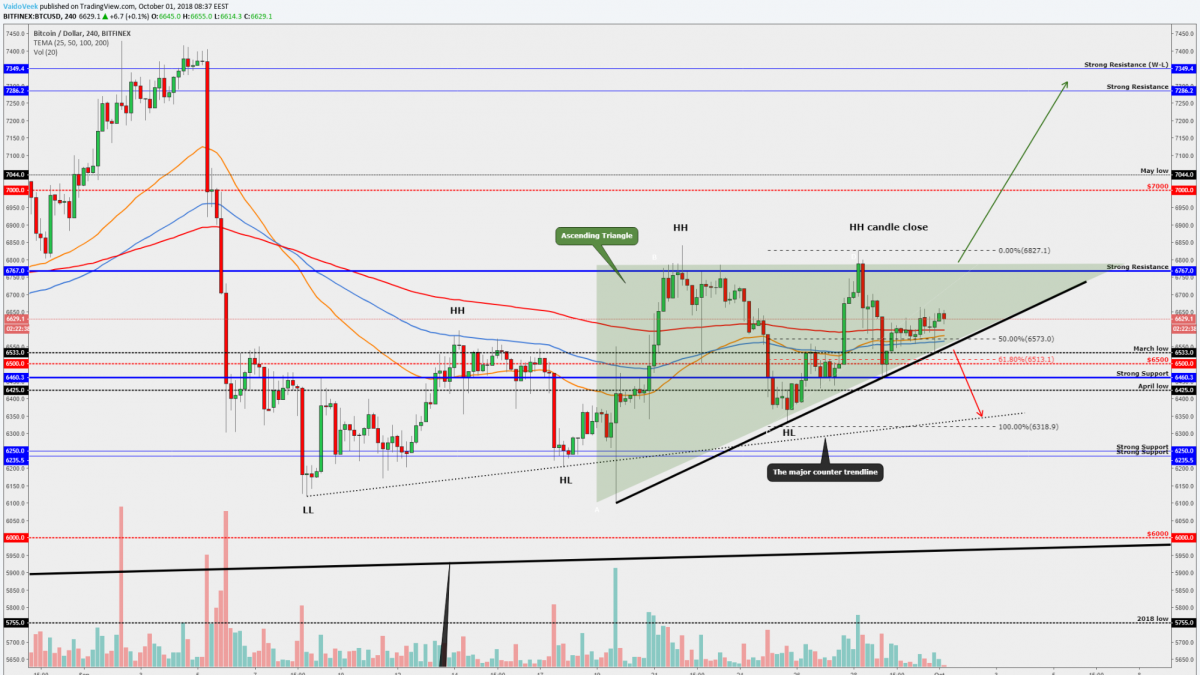 Over the weeks, the chart has drawn a bullish pattern called "Ascending Triangle" which will indicate that we might see a breakout upwards. However, we always have two breakout opportunities from the triangle, but this 'ascending' means that we have an edge to break upwards. Also, we have nice and clean higher highs and higher lows on the price structure which indicates a little bullishness.

Let's talk about a couple of scenarios:

Ethereum(ETH/USD) is still on the "Rising Wedge"

As Bitcoin, Ethereum trades currently between the two blue lines, support and resistance. The resistance line at $236 has been before a support and now it becomes a resistance. 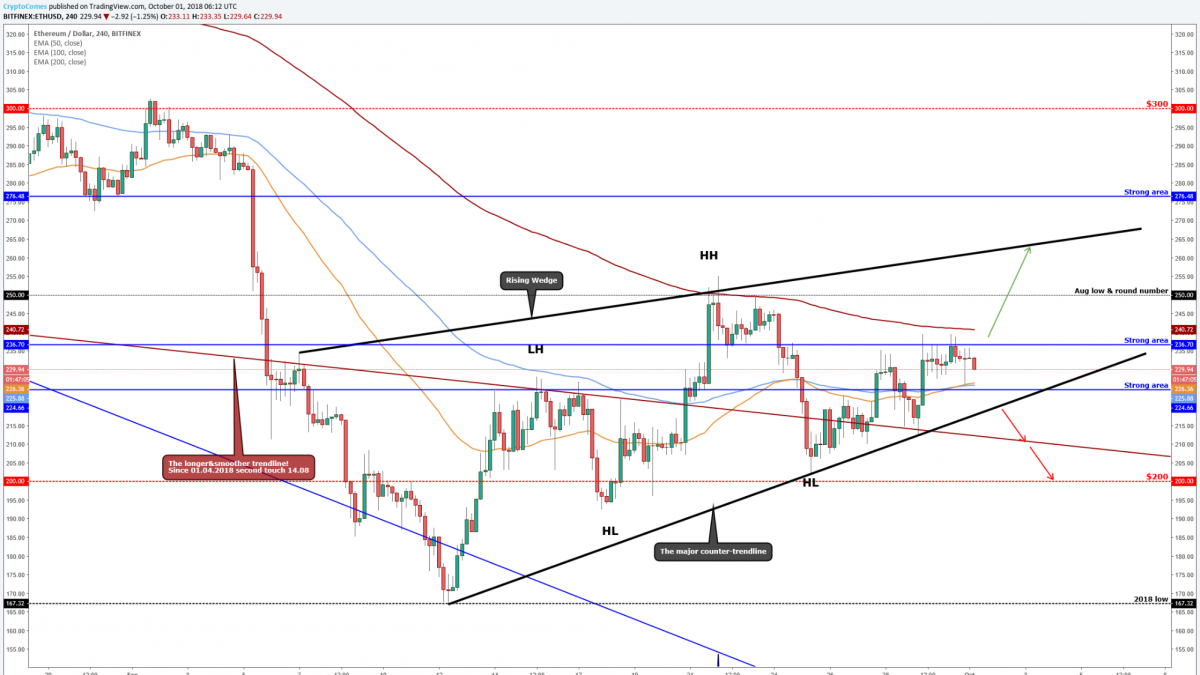 Several times it has tried to break above that blue line, but those attempts were unsuccessful. To break through this level, we have to fight with 200 EMA which starts to work as a strong resistance on the four-hour chart.

Ethereum shows nice short-term higher highs and higher lows since Sept. 25. This could show us that we have market structure and power to push the price upwards from the mentioned level and the next target would be around $260 where the minor trendline is.

The current support line has been historically a good S&R level and now it becomes a major support level again. To make this level even stronger then we trade above the 50 and 100 EMA's which should also start to work as support levels. If we break below that blue line and if we break below that major counter trendline then we have a bearish confirmation and the bearish confirmation is even stronger because we are on the continuation chart pattern called "Rising Wedge.” The overall market trend is down and if Bitcoin makes a breakout downwards from the triangle then Ethereum definitely makes a breakout downwards from the "Rising Wedge" and probably the next stop would be around $200. So, stay alert when you see at least a four-hour candle close below the major counter trendline which also breakout from the continuation pattern "Rising Wedge.”

Cardano (ADA/USD) is ready to make a move

Almost everywhere there are chart patterns and Cardano is no exception, there is a symmetric triangle formation. Usually, this means if the breakout occurs in either direction then this will show the momentum where the price could be heading. 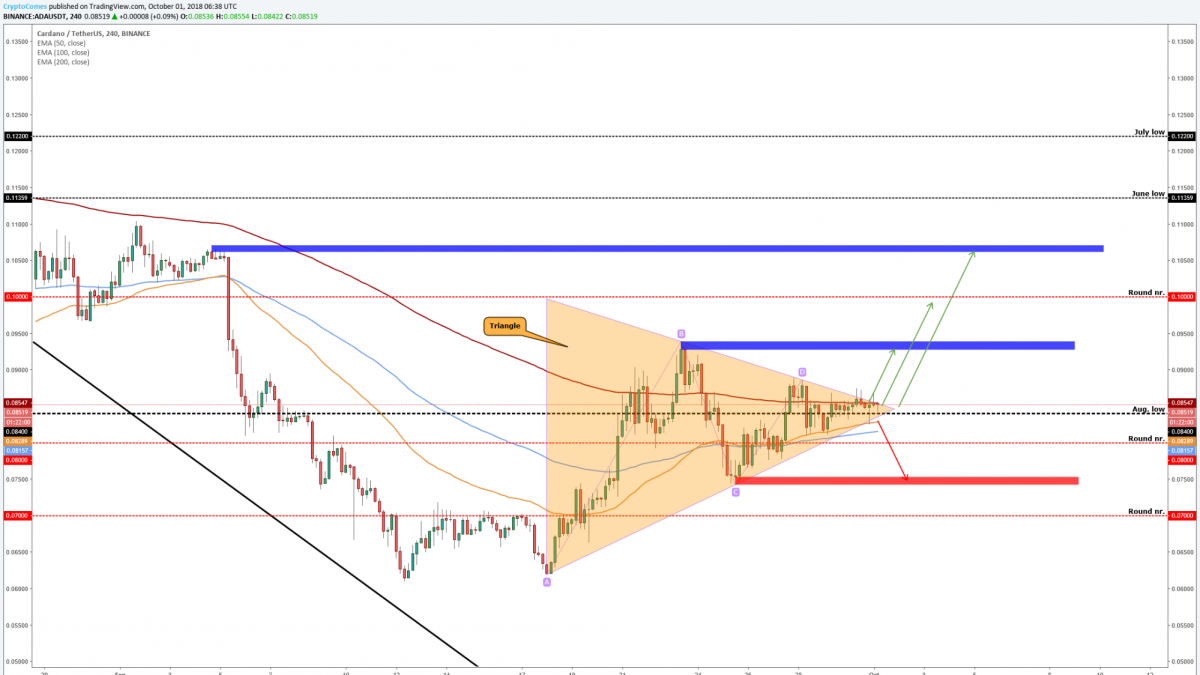 Currently, we are on the edge ready to explode because the price is on the triangle tip, smashed together and prepared to make a move.

We have a pretty good platform to do this because we have tried several times to break below the August low but those were failed attempts and it holds us nicely. If we manage to break above then there are three targets:

As you know, the breakout could occur in either direction. If the August low doesn't hold us anymore, then we have a breakout below the triangle and you should consider selling your ADA coins because this is an indication that we might go and test the lower levels. The first area where we could technically consider buying again is around $0.075. There is the latest support level and this level has to be on the 'watch list.’