Bitcoin Spikes Towards $6,800 But Rapidly Dips Back Down Again

Darryn Pollock
Bitcoin’s price is still growing and getting a little more volatile, as it nearly reached $6,800 before falling back down again 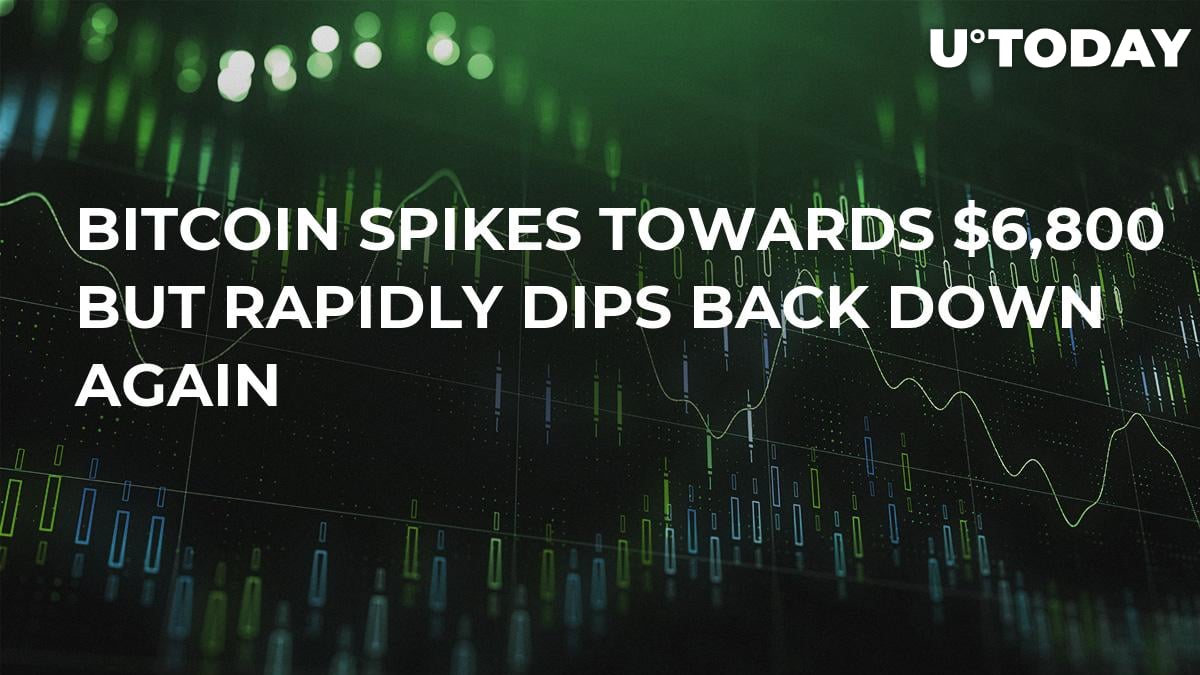 Bitcoin has continued to grow steadily through this week, among other altcoins which have also produced good gains, but the dominant cryptocurrency is still struggling to break the $6,800 mark. Bitcoin has managed to top $6,785, but in the same day has fallen back down to $6,600.

However, even with the spike for Bitcoin, and its fall back, the market sentiment is still mostly positive with nearly all of the top 20 coins showing green numbers, barring Bitcoin Cash which is coming back down to earth after its own impressive spike in price.

Bitcoin has found a key resistance with the $6,800 mark, struggling to cross that line since it began to move upwards and price again. Having made its way slowly up from $6,200, Bitcoin came close to the resistance, but was then shoved back down again.

Billionaire investor Mike Novogratz has said that $6,800 and $8,800 are major resistance levels for BTC in the short-term.

Bitcoin’s high for today was a mere few dollar short of this resistance level, but in quick time, the cryptocurrency crashed back down to $6,600. Bitcoin’s downfall in terms of gains is actually one of its positives as its volatility price has not been that wild at all.

The discrepancy between the gains of Bitcoin and the rest of the market can be attributed to the stability of the cryptocurrency. From July to September, for nearly three months, Bitcoin has demonstrated a slight loss of nine percent. Meanwhile, Ripple and Ethereum declined by more than 45 percent.

While Bitcoin continues to battle with its key resistance, it is also losing ground when it comes to market dominance as the cryptocurrency has shed almost 10 percent of its dominance since earlier this month where it hit a year high of close to 60 percent.

The likes of Ripple and Bitcoin Cash have both spiked heavily this week with the former growing in stature on news of its latest product, xRapid, being close to ready, and the latter piggybacking on Bitmain’s attempt to launch an IPO.

Bitcoin Cash has fallen back four percent from its rally, but this is only a correction and has not dampened the growth of the Bitcoin fork much at all.

Speaking of altcoins, little known Eternal Token has been growing substantially day on day and is now ranked 50th in the market cap standings having picked up another 45 percent growth in the last 24 hours.