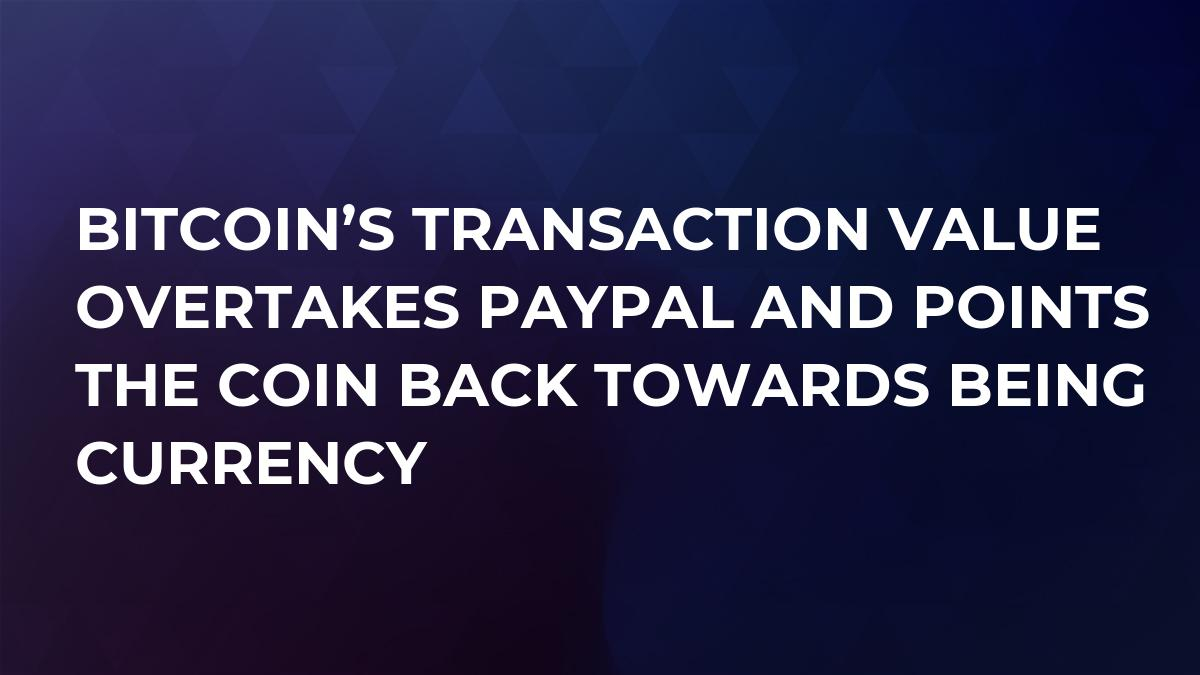 The ebbs and flow of Bitcoin continue as the major cryptocurrency continues to find its true identity. It has flittered between being a currency of the Internet in its dark web days, and it has more recently become a store of value- a digital gold- for varying reasons.

However, there are factors and indications that are showing that Bitcoin could well be pushing back to being a functional currency. Aspects like a clear mempool, cheaper and quicker transactions, less volatility in an upward trend, and more transaction value, seem to show that Bitcoin can be used and spent effectively.

In fact, Bitcoin’s transaction value, rather than the more favored metric of transaction volume, shows that more money has been processed in Bitcoin than through popular digital payment solution, PayPal.

So often, Bitcoin’s progress and performance are measured by its price increasing and decreasing, but also by its transaction volume. However, delving deeper into that metric and measuring the actual dollar amount and one can derive a lot of insight into the digital currency.

Yassine Elmandjra, who works at New York-based investment firm ARK Invest, has pointed out that Bitcoin’s transaction volume has reached $1.3 tln this year, and that puts it ahead of PayPal and Discover- although meager compared to Visa which is closer to $9 tln.

Bitcoin’s base layer transaction volume doesn’t compare to Visa’s, MC’s et al. But it was never supposed to. pic.twitter.com/jiPpxR4SOQ

Bitcoins transaction value reaching the heights of a payment network like PayPal could be indicating a move towards the digital currency being used more and more as a currency.

Bitcoin, at its prominence in terms of price, was considered too valuable to use and spend, or send, and as such, it became a true investable asset. However, as time has gone on and the digital currency has lost its value and struggled to pile on the gains, its value as an asset has shrunk.

However, in that, the scaling debate that was slowing its adoption as a functional currency has also abated as there is no congestion in the mempool, and the price of transactions is back to being very low.

That being said, there will still be a big percentage of transactional volume in Bitcoin that comes from speculative trading that is not present in things like Visa, Discover or PayPal.