Bitcoin Growth Has Always Been Organic, Why Panic Over Ad Bans?

Darryn Pollock
Bitcoin does not need marketing or glitzy adverts, so why should ad bans effect it? 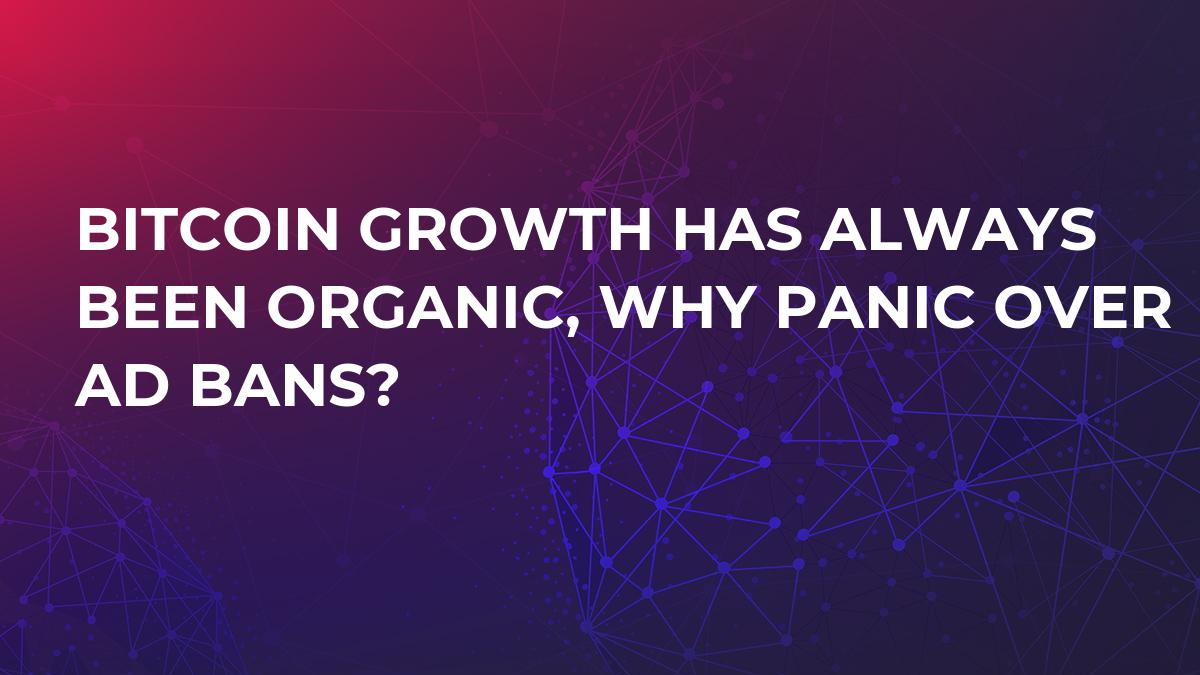 Two recent hit out at the cryptocurrency market have come from major players in Internet usage, that of Facebook and Google. When these announcements were made, Bitcoin price was affected negatively.

However, it is strange that it happens that way, as, even stated by these companies, the target of the ban is not Bitcoin, and any of the major coins, it is the scams. There are hundreds of dodgy ICOs, coins, scams and other dubious cryptocurrency businesses out there, but it has all but been unanimously agreed that Bitcoin is not one.

In fact, even if Bitcoin was targeted in this ban, it should not have much effect as the growth of Bitcoin over the years has been almost solely organic.

Bitcoin is not the target

In Google’s recent statement on their ban of crypto adverts, they stated:

“This year, we updated several policies to address ads in unregulated or speculative financial products like binary options, cryptocurrency, foreign exchange markets and contracts for difference (or CFDs).”

While this is a board swipe at an entire market, the goal of the ban is to protect individuals from being scammed by the dubious side of the burgeoning market.

Similarly, with Facebook, they stated that the ban on adverts is aimed at those “not operating in good faith.”

“We want people to continue to discover and learn about new products and services through Facebook ads without fear of scams or deception. That said, many companies are advertising binary options, ICOs and cryptocurrencies that are not currently operating in good faith.”

Thus, it is quite clear that Bitcoin is not the target of these beans, and that it has proven itself not to be dubious. It may be risky, but these moves by Google and Facebook are not to mitigate risk, but to protect from scams.

Additionally, for those who have been inundated with Google and Facebook ads surrounding the crypto market, when was the last time a Bitcoin ad was seen? The decentralized coin has no marketing department, no content team pushing different campaigns, it is a coin that has garnered its reputation organically.

The Bitcoin brand has grown of its own accord, so, even if there was a ban on it’s advertising, really, there would be no effects to feel.

Still, Bitcoin’s price is taking a hit on this news, but really, it should be seen as positive news because the amount of dodgy and deceitful coins impersonating Bitcoin will be taken down and pushed to obscurity. Tags: Google, Facebook, Advertising, Ban, Bitcoin