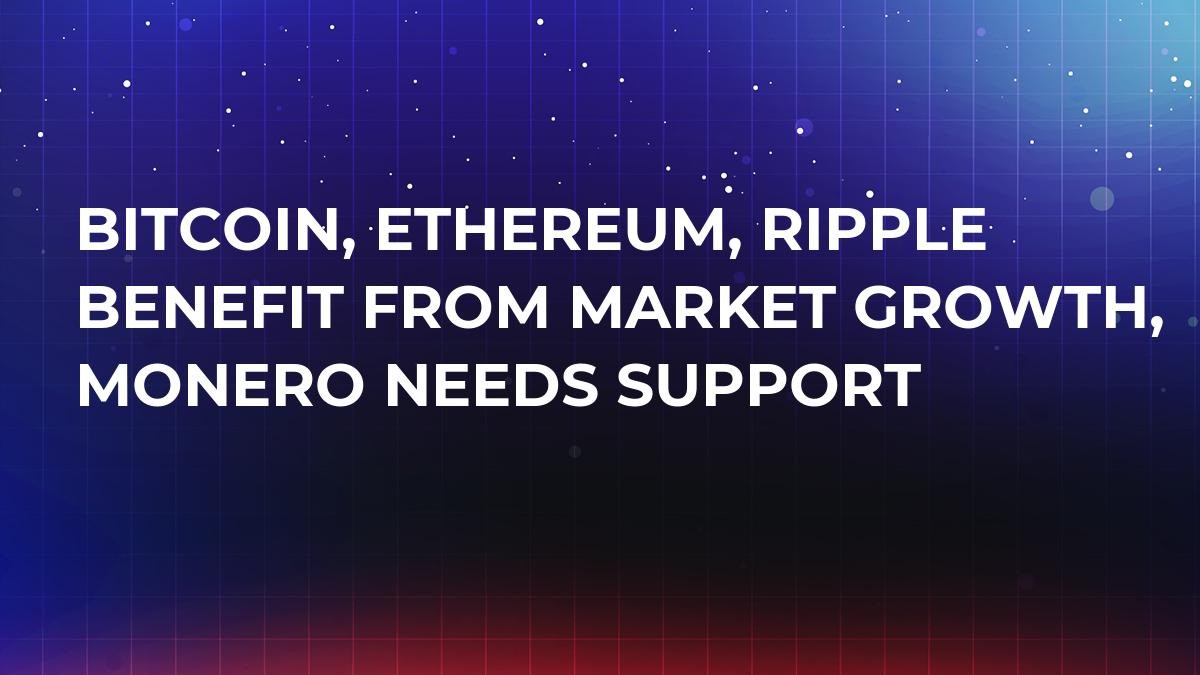 Let's commit this date to memory: April 12, 2018. Perhaps it will go down in history as the day when a powerful upward trend was born in the cryptocurrency market, carrying the assets up to new, previously unexplored heights.

But even if this does not happen, it has been a long time since we’ve seen such unpredictable and dramatic trading. For those who missed it, we’ll give a brief description of the bacchanalia that transpired, peppering the story with some authoritative commentary.

At the beginning of the day, Bitcoin was not doing very well. The figure that we analyzed in yesterday’s review was punctured downward, technical indicators and graphical analysis suggested that a further fall is not only possible but probable.

Altcoins joined the main asset in the dreary outlook. But, at exactly 11 a.m. (UTC) a mysterious buyer appeared on the playing field and began to buy up Bitcoin at the market price of $6,800. He lit a green candle the likes of which we have not seen since November 2017.

As a result, Bitcoin price grew by $1000 in a half hour, and the market moved to a new existential logic. It seems that the price of $6,800 turned out to be a comfortable one for a big investor. At the same time, the temptation to buy lower could have played a cruel joke on him - if Bitcoin dropped to $6,600 again, dragging it out of that hole would have been much more difficult.

Market capitalization has grown rapidly by more than 10 percent and currently stands at $337 bln. Of course, all members of the top 10 grew in relation to the dollar, but the best results are shown by IOTA (plus 25 percent), Cardano (plus 19 percent) and Ripple (plus 16 percent). Among outsiders today was EOS with a modest 4.5 percent increase and Litecoin with an increase of eight percent. While EOS deserves a rest after yesterday's rally, the same cannot be said of Litecoin.

Without exaggeration, the huge purchase volume helped Bitcoin easily overcome the important resistance at the $7,500 level, which has now become a support. Perhaps in the near future, we will see a retest of this mark, but so far it is not limiting growth, and neither is the descending channel that has been left far behind.

The price is forming a beautiful bullish flag, indicating a target of $9,200. A realistic view of the situation does not allow us to rely on such a scenario: on the way down, the Bitcoin submarine gathered a lot of passengers who were suffering losses and dreaming of an exit that was at least equal to the price of purchase.

At the same time, we see a well-formed gently inclined upward trend, in which the price can continue to move for some time. In this case, a correction to $7,500 will be logical.

As we did yesterday, we are closely watching the price’s exit from the figure. An upward activation will allow the bulls to go for $8,300-$ 8,500, while a downward break will lead prices to the nearest support level.

Despite the false downward break of the "cup with a handle" figure, further developments turned out to be positive for investors. Assisted by the explosive growth of the rest of the market, Ethereum reached its first goal of $475, fell back a little, and after several attempts broke the boundary of the long-term descending channel. Encouraged by their success, the bulls did not stop and continued to push the price to the level of 0.618 Fibonacci expansion - $500.

The next buyer target is $540, but as in the case with Bitcoin, we do not expect an immediate continuation of rapid growth. In our opinion, a retest of the boundary of the descending channel, or at least of the $475 level coinciding with the value of 0.5 Fibonacci expansion, would be quite appropriate.

Unlike other assets, Monero will encounter a few more parallel descending channels on its growth path before the downtrend will release this coin from its embrace. One obstacle was respectably overcome yesterday, the next is at the level of $200.

Similar to the Bitcoin graph, we see a bullish flag with a $215 target. As often happens, this goal finds several confirmations at once - the mirror level and the boundary of the last parallel descending channel. After passing this milestone, nothing will hold XMR back. Given a negative development, we could see a fallback to the nearest support - $180, where it will be sensible to consider acquiring the asset for the medium term.

In the course of the prolonged correction, Ripple suffered more than many other coins, so it is not surprising that in the absence of negative fundamental news (as in the case of Litecoin), it is recovering faster than the market.

On Thursday, XRP price exceeded the targets we set yesterday and almost reached $0.67. Overcoming this mark is a key factor for continued growth - it's a mirror resistance level, which confirmed the significance on Feb. 2 when the trading volume for Ripple was at its maximum, as well as the point of intersection of the values ​​of 0.786 and 0.236 of two Fibonacci extensions.

Since we expect a slight price fallback for most assets, we will also designate a level for Ripple: with a high degree of probability it is $0.59, which coincides with the 0.5 value on the  Fibonacci grid.