Bitcoin (BTC) Price Falls from $4,000 While Binance Reports ATH for Trading — Is Interest Back?

Darryn Pollock
Bitcoin has sparked a lot of trading interest since it went above $4,000, and even as it fell again, Binance reported it was overloaded 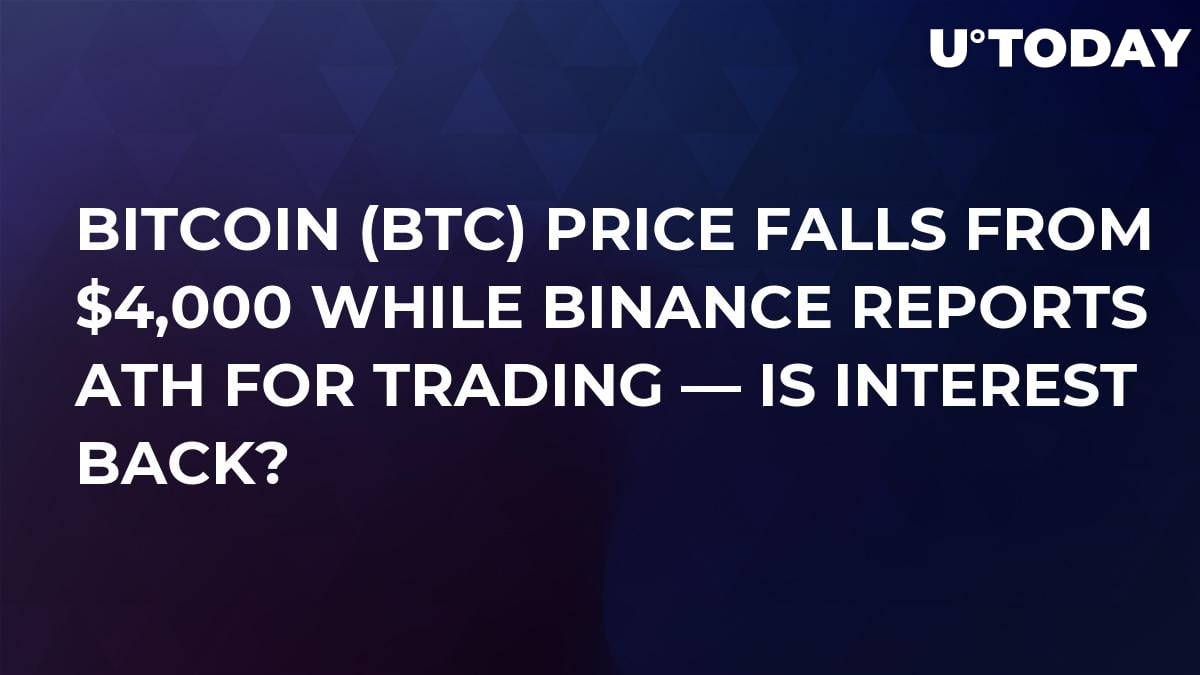 Bitcoin has had the $4,000 mark hanging over its head since November last year, and when the cryptocurrency managed to push past it, there was a lot of excitement and revived enthusiasm for the market. Many thought that this could be indicative of a change in the sentiment, and that a bull run could be around the corner.

However, the level was tested and failed as the price of the cryptocurrency then fell back towards $3,700. Even still, there has been a massive influx in trading volume, so much so that Binance, one of the biggest exchanges in the world, reported that they were overloaded.

As Bitcoin began dropping, the trading volume spiked up to $11 billion. A lot of this trading volume went through Binance, causing the disruption, but also pointing towards a renewed interest in the cryptocurrency market.

Prior to the climb towards $4,000, Bitcoin’s trading volume was around $7 billion, but even after this drop in price, the volume is still sitting at $10 billion.

Binance, the largest digital currency exchange in the market in terms of trading volume, has experienced some issues with the services offered over the weekend with the price fluctuations.

In fact, their personable CEO even took to Twitter to explain how the trading volume increase was playing havoc with their system. Changpeng "CZ" Zhao said that the exchange had experienced an all-time high for trading system load a few hours ago. Some users were experiencing UI delays during the system auto-scaling.

We seen ATH for trading system load about an hour ago, some users experienced ui delays during system auto scaling.  Still improving.

With less excitement and movement, and thus liquidity, in the market, it has made it harder for the price to break out of its bearish cycle. However, with this increased interest via the bigger trading volume, there is every chance that the volatility of the cryptocurrency market could return, and a general bull run may still be on the cards.