Vinny Lingham On Bitcoin Future and Next Crypto Star: Exclusive to CryptoComes 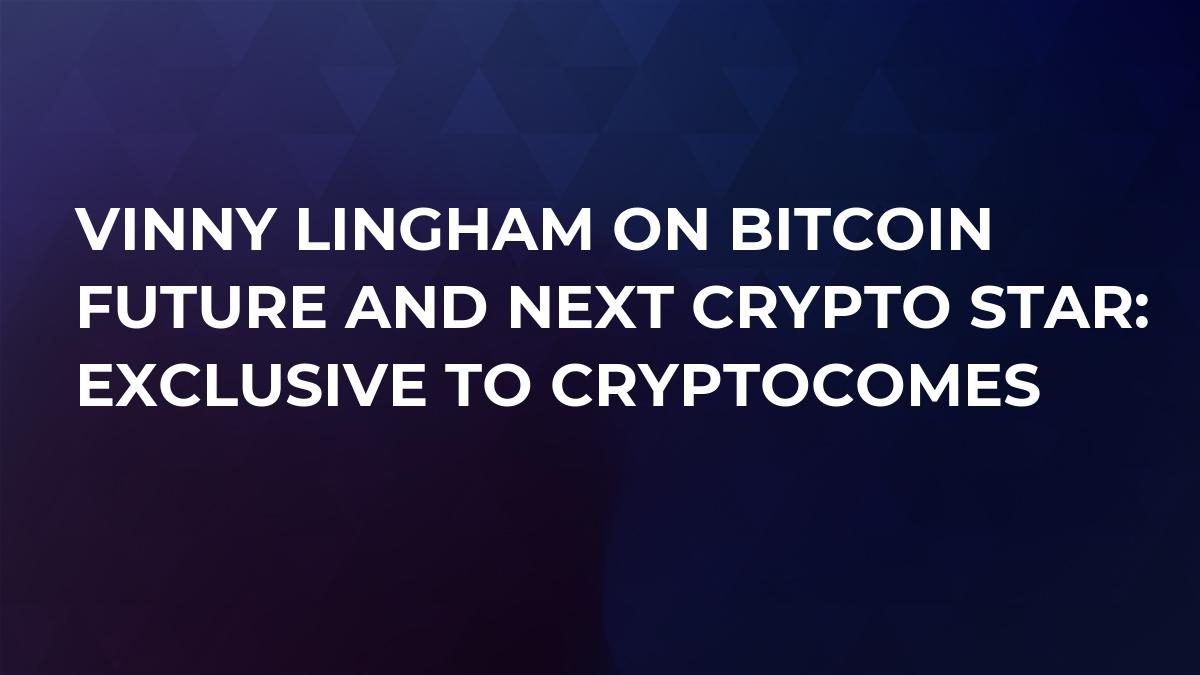 Vinny Lingham Talks to CryptoComes About the Aggressive Market, the Next Crypto Star, and Personal Data Security.

CryptoComes will surprise no one by confessing that we have been waiting for a turn at Vinny Lingham’s dispensary of uncanny cryptocurrency wisdom, especially given the market turmoil of the last few months. We got the chance at last week’s StartEngine ICO 2.0 Spring Summit in Los Angeles. Over a hurried breakfast between a panel on “The State of ICO Regulation” and his flight out to the next destination, Vinny shared some industry insights which we dutifully pass on to our readers - until the next encounter with the Bitcoin Oracle…

Katya Michaels: You are known for your predictions. So, are you always right?

Vinny Lingham: No, but you only need to be right half the time to be an oracle.

KM: Still, how do you do it? Is it just common sense?

VL: It’s more fundamental base, market timing, psychology, and so on. I'm not always right about it. I do also think that the market's been a bit too aggressive lately. But things can't go up forever, that quickly, it doesn't work that way.

KM: In any case, your predictions about Bitcoin Cash are being confirmed. Is there something inherent that makes it grow?

The network effect around Bitcoin Cash is growing faster than Bitcoin. It's a smaller currency, so it will grow faster, but the question is - can it catch up to Bitcoin. That still remains to be seen. Bitcoin has a network effect that is second to none.

KM: How far do you think Bitcoin Cash will go this year? Do you have a figure in mind?

VL: I don't, we'll see how it goes. It depends on whether or not it decouples from Bitcoin. Right now it trades in the range of Bitcoin, and it needs to decouple significantly, which might take a long time.

KM: Most cryptocurrencies seem to follow Bitcoin’s movement in the market. Do you think this can change?

VL: Yes, once you have stable coins and security tokens, they will be able to move on their own.

KM: Who is the next big star in Crypto - Cardano? EOS perhaps?

The next star is Filecoin, when it goes live eventually, later this year maybe. I invested in 2014 and I’m a big believer in the technology, the team and what they are doing.

KM: Are you still critical of Litecoin?

VL: I still don't understand Litecoin enough. I don't know how it's different from Bitcoin, except that it's a little bit faster. I still don't get it - maybe I'll never get it.

KM: Your own project, Civic, addresses the security of identity and personal data. In the aftermath of Cambridge Analytica, how can Blockchain help users regain control of their information? Do you think there are any viable Blockchain based challenges to Facebook right now?

I don't think that Facebook has any challenges right now because it's just too big. Two billion people onboarding to something else is not going to happen anytime soon.

I do think that you can enhance user privacy by moving to solutions like Civic where people can control their own data and authorize who can see it and who can use it. But replacing Facebook right now is impossible, you can just build something different.

KM: Do you think people are ready to own and be in control of their data?

VL: I think a lot of people are ready and they want it, it's just not there for them yet.

KM: What are the main challenges to the adoption of identity-management platforms like Civic?

VL: The biggest challenge right now is that the current regulations don't really force companies to be cognizant of the use of data that they are storing. Now GDPR in Europe is coming in next month, and I think US regulations are coming as well. Adoption will happen when we have government regulations forcing companies to be responsible and they have to look at solutions like Civic.

KM: What do you think is the best platform right now for decentralized applications and smart contracts?

KM: It seems that people misunderstand Blockchain applications and smart contracts a lot at the moment.

VL: Very much so. Everyone says “we can do all these cool things,” but no one is actually doing anything with it, there are no use cases.

KM: Why do you think that is?

It's early stage technology, that's always the case. The dream is there, the reality is a nightmare.

KM: Artificial intelligence and machine learning are some of the most exciting technology developments now. What is the big next influence or application of that in crypto?

VL: I think it's just about finding use cases, a way that we could use this technology, something really cool. And it needs to be used at scale, it can't be five transactions a day. Even if use cases are there, adoption takes time - adoption takes longer than scaling. You can always scale things if you have enough adoption.

KM: And what is the key to encouraging adoption?

VL: Focusing less on the technology and more on the use cases. Also, getting companies to buy into it - companies aren't using blockchains right now, .01 percent maybe.

KM: Are the costs of transition too high?

It's going to take a while. Look at the internet, it took 30 years to adopt, starting in the 70s and 80s. Why do we think it's going to be different this time? I'm not bearish, I'm bullish on it, but these things don't happen overnight, it takes time.

KM: But will the market climb back or is this it?

VL: I think I'm expecting one more big dip, then it'll come back and we’ll see how it goes.