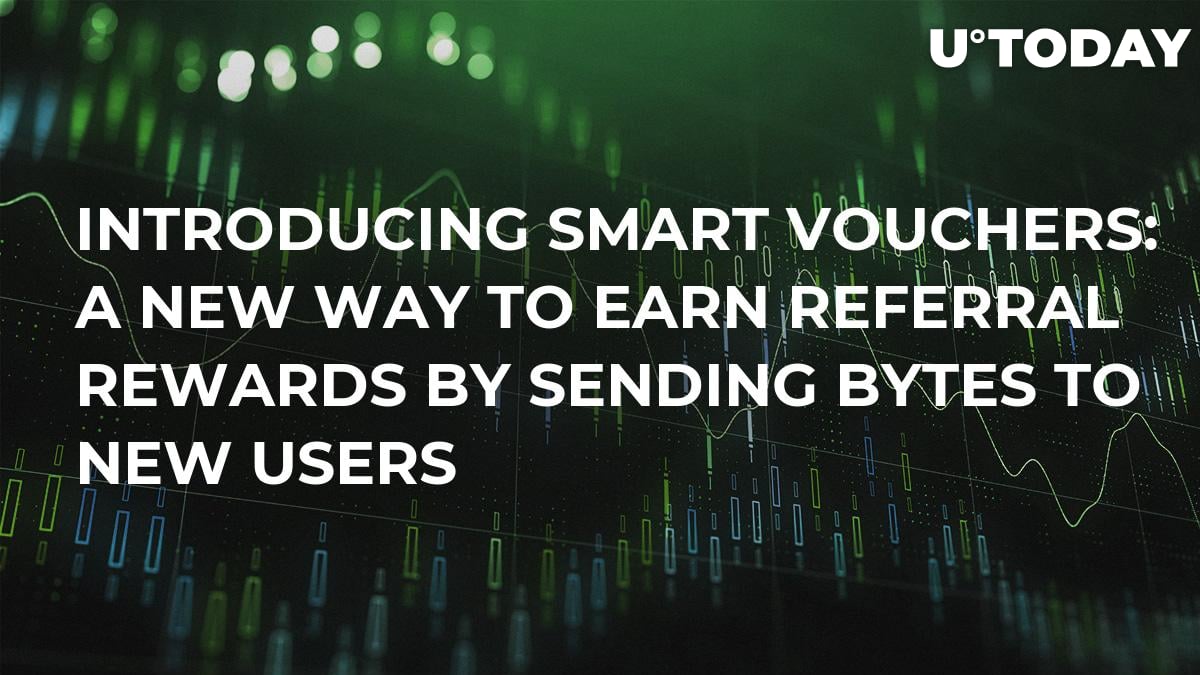 Get paid to send Bytes

Smart Vouchers are like bank deposits that accrue referral rewards

Although many in the distributed ledger world are frustrated with aspects of banking systems, their existence helps explain how our Smart Vouchers work.

Think of a bank account. You deposit some Bytes on the account (Smart Voucher). You put them to work paying for new users attestations, and you earn the referral rewards, which get added back to your Smart Voucher.  You can withdraw your money from the Smart Voucher at any time, or you can add more to scale out.

You are paid for referring new users to the Byteball network, and new users are also paid for joining. That's the basic premise. At first glance, the graphic below may seem a bit complex. Remember the basic premise though and follow the below steps.

2: The Smart Voucher code is automatically created, it’s just a sequence of letters and digits that looks like VMJKYJGE3RUMT. You can now share it with whoever you feel like: a friend, colleague, family member, readers of your blog, viewers of your YouTube channel - you get the idea.

3: Let's say you share it with your brother Ben (referred user). He can then use that code instead of paying the $8 fee for a Real Name Attestation (to prove he really is Ben and not a robot trying to game the system). For Ben, the Smart Voucher acts like a discount code, or a coupon, that entitles him to a 100% discount on real name attestation.

5: If Ben’s attestation is successful, his $20 attestation reward is split in two. $12 is sent to a smart contract on Ben’s wallet. He can withdraw that amount 1 year later.

6: The other part of the attestation reward is a $8 reward. This part gets returned to your Voucher to reimburse you for the price of the successful attestation. You also receive a $20 referral reward. This gets sent to the same Smart Voucher and its entire balance ($60 in this example) can now be used to fund new attestation fees.

7: You (the Sponsor) can withdraw the amount you initially deposited directly to your wallet (but not exceeding the Smart Voucher balance). The Smart Voucher balance exceeding what you deposited to it (that is, your net earnings) can be withdrawn to a time locked Smart Contract from which it can be withdrawn after 1 year. The smart contract is automatically created by the bot when it is first withdrawn to.

How much can you expect to earn?

You might be wondering what ROI you can expect as a Sponsor.  Let’s assume that only 50% of your referrals successfully complete the attestation and earn you referral rewards. The other 50% just spend the $8 attestation price from your Smart Voucher and earn you nothing (the historical success rate is significantly better at 77% based on the almost 20,000 real name attestations completed so far).

The Sponsor himself must be verified prior to creating a Smart Voucher.

Restoring a wallet from seed will not bring back access to the contract. So make sure to do a full backup every time a new Smart Contract is created on your wallet.

Smart Voucher balance is tracked in Bytes, not USD, and is therefore subject to cryptocurrency rate fluctuations. For the best user experience, deposit to the Voucher more than $8 (or more than 8 times the number of attestation attempts you wish to fund).

Byteball rewards new users that join the network. Therefore, referral rewards don't get paid if an attestation is performed from a device that was previously used to attest another person, as this isn't considered a new Byteball user. A referral is getting a second person to install the Byteball wallet on his own device (smartphone or computer) and doing an attestation from that device/wallet, using the Smart Voucher received from the first person.

We know the above might look rather confusing, but the best way to see how it works is to try it!

By default a Smart Voucher can be used by the same user at most twice to try to attest their identity. The sponsor can change the maximum number of attempts if they wish. Attestation attempts are tracked by the users device address, and the limit is in place to protect the voucher from being drained by repeated failed attestation attempts by the same user. If you are unfamiliar with Byteball identity attestations you can read about them here.

A network with a large subset of verified users

This new distribution method allows us to grow the network much faster than before by leveraging existing social and business links. The average person (at least in the USA) is conservatively estimated to know to some extent several hundred people, so the potential network effect of this distribution is greater than previous ones. Further, we are encouraging users to use real names to help build a network with a large subset of verified users.

Real world identities help build trust, and when they are brought online through real name attestation, they become much easier to use. In case an ICO wants you to verify your real world identity before buying their token, they can do it, easily. Nous platform ICO is already doing it. Should a gambling service want to restrict the age of its users to stay compliant, they can do it, and you don’t have to disclose all the details of your ID when only age is required. You want to know the identity of those who use BIoT and streaming payments to rent your car or apartment, just in case? You can do it.

We encourage application developers to find use cases and build apps that leverage the secure online identity, a Grants program is in place to help fund the development.