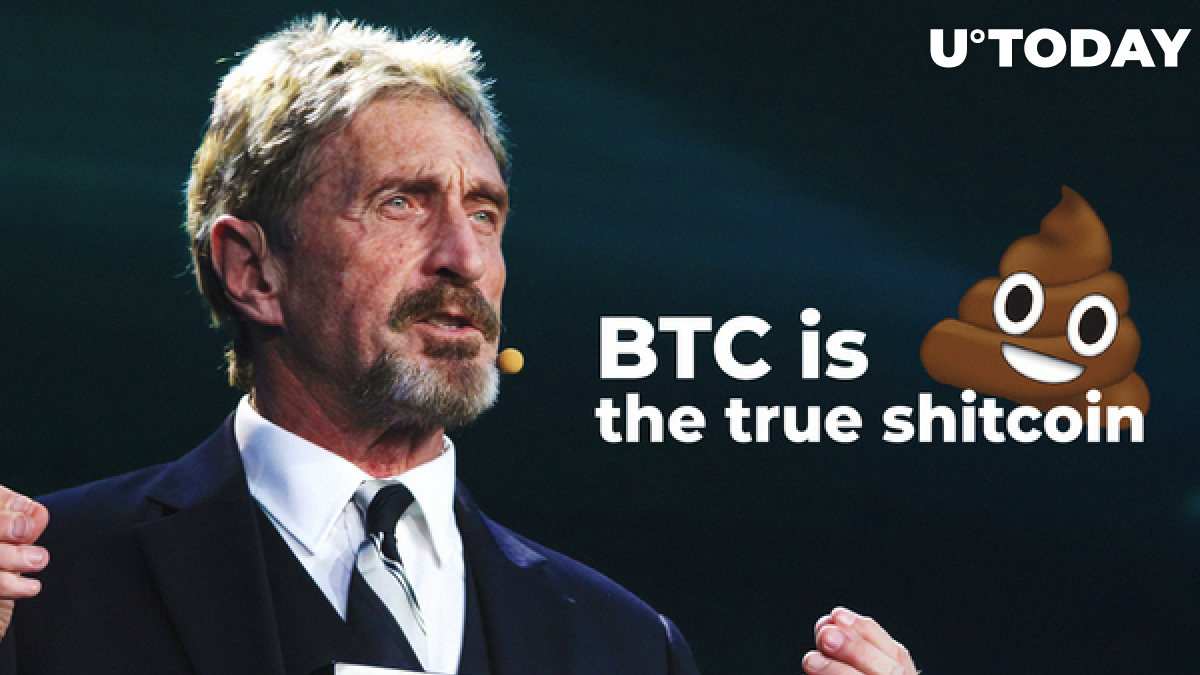 The US presidential candidate John McAfee has always been famous as a Bitcoin permabull who first predicted BTC to hit $500,000 in late 2020, later on raising his bet to $1 mln.

The former antivirus mogul even publicly stated that he would eat his own penis on US national TV unless BTC traded at $1 mln by December 31, 2020.

Now, in the latest tweet, John McAfee says that the future of crypto rests with altcoins and that Bitcoin is ‘the true shitcoin’.

In a recent Twitter post, crypto baron John McAfee praises the Bitcoin maximalist who first started using the word ‘shitcoin’ to refer to altcoins, thus expressing their negative attitude to alts and pointing to Bitcoin as superior to them. However, what McAfee does next is criticize BTC, calling it ‘old’ and ‘chunky’.

‘It is the true shitcoin’, he concludes.

Whichever Bitcoin Maximalist came up with the term "Shitcoin" for all other coins;

But we all know that the future of Crypto rests with the Alt Coins.

Old, clunky, no security, no smart contracts, no DAPs ....

Is the true Shitcoin.

Earlier, U.Today reported that McAfee backed off his promise to eat his manhood publicly if BTC failed to reach the $1 mln price per coin. He stated that this prediction was merely a ruse to attract new users to the crypto industry. And it worked, he said. Besides, he called Bitcoin ‘an ancient technology’ earlier too.

In the comment thread, some users started rebuking McAfee for the new attitude he recently adopted towards Bitcoin.

One user believes that McAfee has begun to call BTC a shitcoin because he is about to take part in presidential elections on November 3 this year. If BTC fails, this person says, altcoins will become 'the useless rest' too.

Lol, I wonder if you just flip flopping because you are making a run at politics
You know as well as I know that if bitcoin fail the whole eco system will too and alts will become the domain extension (not .com but the useless rest)

Another person reproaches McAfee, saying that he has made a U-turn on Bitcoin since his prediction regarding the $1-mln price this year is most likely to fail.

Who's the man who was extremely bullish on Bitcoin predicted a million dollar Bitcoin by 2020 and bet his dik on it and now he lost the bet, backed out, took a U turn, started talking shit instead...

Other commentators seem to be led to believe that McAfee is about to start promoting coins on his Twitter account again. Therefore, they say, he is praising altcoins again, instead of the flagship crypto - Bitcoin.