European Union and Its Issues With Blockchain, GDPR, and Its Own Cryptocurrency 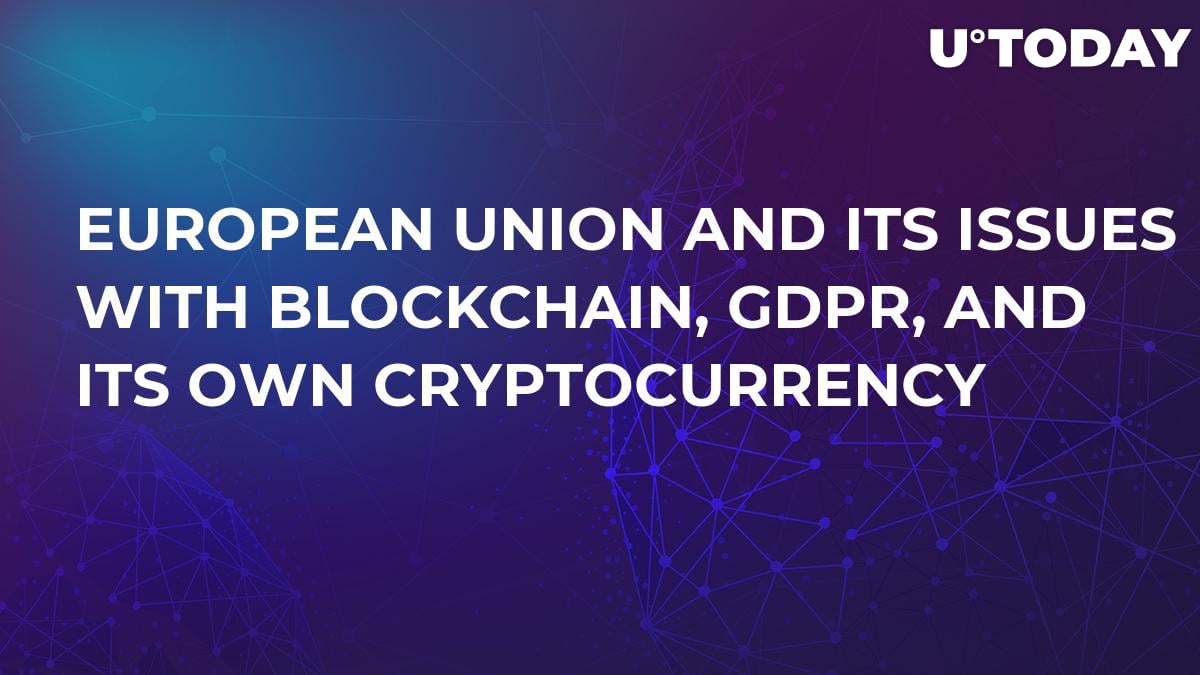 The European Union, like many other nations across the globe, is looking to come to terms with the new Blockchain and cryptocurrency revolution has been sweeping in. The Union, as a collective, has not been too decisive in its stance when it comes to Blockchain, but it is slowly starting to inadvertently exclude itself.

The EU’s position has been mostly one of wait and see, but as that wait and see attitude extends, and the technology starts to overtake, there is a real danger of the EU being left in the cold.

Already it is having issues with its newly places, but seemingly already outdated, General Data Protection Regulation (GDPR) which is at odds with the very nature of Blockchain, although missing the entire point of it. Now there is also talk that the Union is not interested in putting in place its own Euro-backed cryptocurrency anytime soon.

No race for the Digital Euro

The EU is in a unique space globally to have such a strong and active membership within the entire region. It is a region that also operates, mostly, on one currency, and because of that world seemed primed to implement its own Digital Euro.

Mario Draghi, president of the ECB since 2011, stated that there is no real need for digital currency at this time and reaffirmed his belief that blockchain technology still requires some development before the ECB attempts to adopt it in any way.

The European Central Bank has never really placed too much importance on cryptocurrencies, citing the fact that many financial institutions were not investing heavily in cryptocurrency in the market. Thus it is not surprising that the ECB feels this way, but it does feel like a missed chance.

Still, the EU’s general understanding and planning around Blockchain has not been too sharp either as many companies have found as they were faced with the GDPR earlier this year.

In March, the EU released the GDPR which is a regulation which is aimed at being forward thinking and one in tune with an advancing digital world. The GDPR essentially states that users have a lot more control of their data, and should they request it, they can ask companies to remove or alter it.

Straight away, this sends up red flags for Blockchain technology which uses its immutability as a key principle. In order to protect one's data on the Blockchain, it is done in a way that no one can alter it.

The EU’s viewpoint on this sort of data protection thus clashes. However, the GDPR is already out of date in many respects because it is still honing in on data that is only coming from a centralized source- such as Google, Apple, Microsoft or other such major corporations. However, because the Blockchain is decentralized, there is no entity to request to change or eliminate user data under the GDPR.

It is not all doom and gloom though as the GDPR and Blockchain companies are finding a way in which they can compromise and get around the strongest nature of the regulation while still appreciating the protection of data.

The issue, however, is that the EU has put Blockchain and cryptocurrencies at the back of their minds for some time now that it feels as if they are falling behind. Their most modern data protection regulation is already out of date, and their mindset for a future currency is that it is not adopted enough.

Down the line, the EU could be struggling to catch up should it’s viewpoint not change and cryptocurrencies become more of an importance for them.