Vladislav Sopov
Ethereum network is ready to welcome London upgrade, its most controversial, yet exciting, upgrade ever 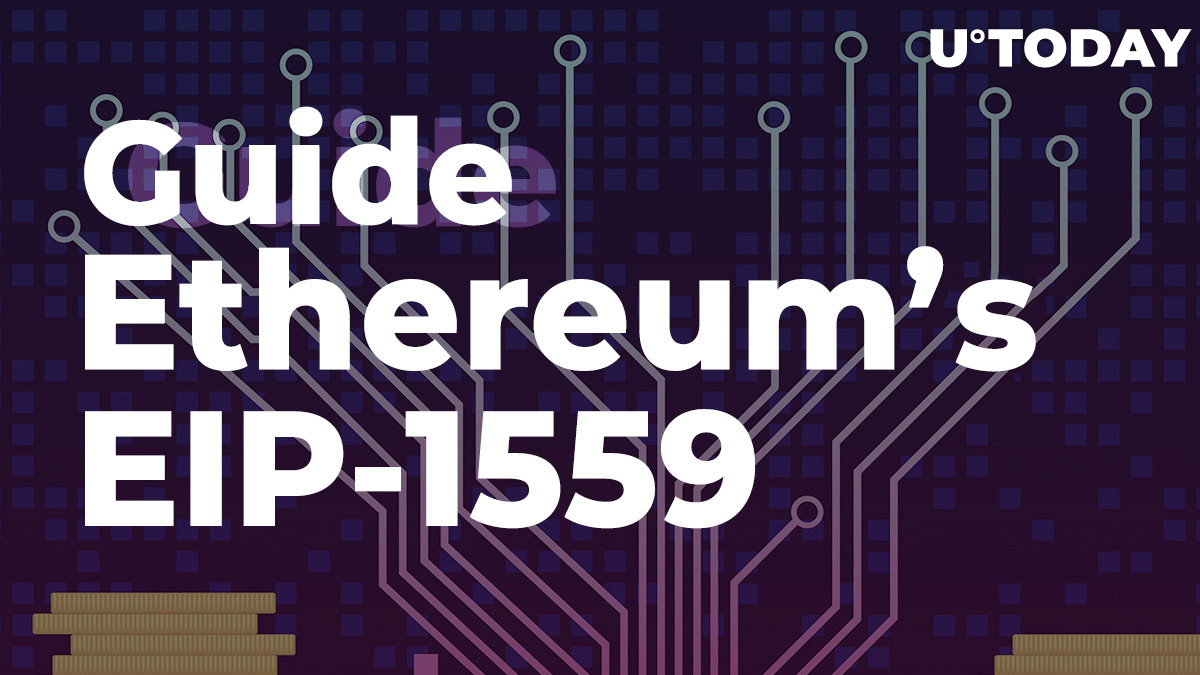 Ethereum (ETH) enthusiasts and community cannot wait for the activation of the London hardfork. At the same time, it includes an EIP that was opposed by top miners and raised concerns for many years. What is special about London?

What is Ethereum (ETH) hardfork?

On blockchains, a hardfork is a mandatory upgrade of protocol mechanisms. All nodes should be upgraded to a new type of consensus in order to support it. Nodes that fail to upgrade are excluded from the networks: their blocks become invalid as “correct” nodes start rejecting them.

In Ethereum (ETH) mainnet, hardforks are typically named after the largest cities, past and present. That is why London follows the activation of St. Petersburg, Berlin, Constantinople, Istanbul, and Byzantium. In addition, there are periodic “Muir Glacier” upgrades designed to avoid the difficulty-related congestion of Ethereum (ETH).

What is a London hardfork?

The London hardfork is an upgrade of the Ethereum (ETH) network that comes at Block 12,965,000 on August 5, 2021. Like every hardfork, it includes several Ethereum Improvement Proposals (EIPs), updates to the consensus mechanism of Ethereum.

The London hardfork consists of five EIPs. EIP-3529 is set to reschedule the way transactional fees can be refunded, EIP-3541 introduces new types of smart contracts needed for DeFi progress and EIP-3554 delays the dangerous “difficulty bomb” to December 2021 (such updates are implemented periodically).

That being said, the most crucial upgrade  is EIP-1559 that introduces a new fee calculation model to Ethereum, and its “sister proposal,” EIP-3198, that expands its experience to smart contracts.

Ethereum Improvement Proposal 1559 (EIP-1559) is an upgrade of the Ethereum protocol that introduces a new fee model and, therefore, affects both miners of Ether and users of the Ethereum mainnet.

Right now, to authorize their transactions and see them included into Ethereum (ETH) blocks, Ethereum (ETH) users or dApps participate in an auction: to include one’s transactions into the block faster, the user or dApp needs to pay higher fees. Fees can vary from negligible to enormous (in times of severe network overload). During periods in which transactional fees are at a maximum, the average Ethereum (ETH) transaction (including micropayments initiated by dApps) is charged with $30-$32 in fees. 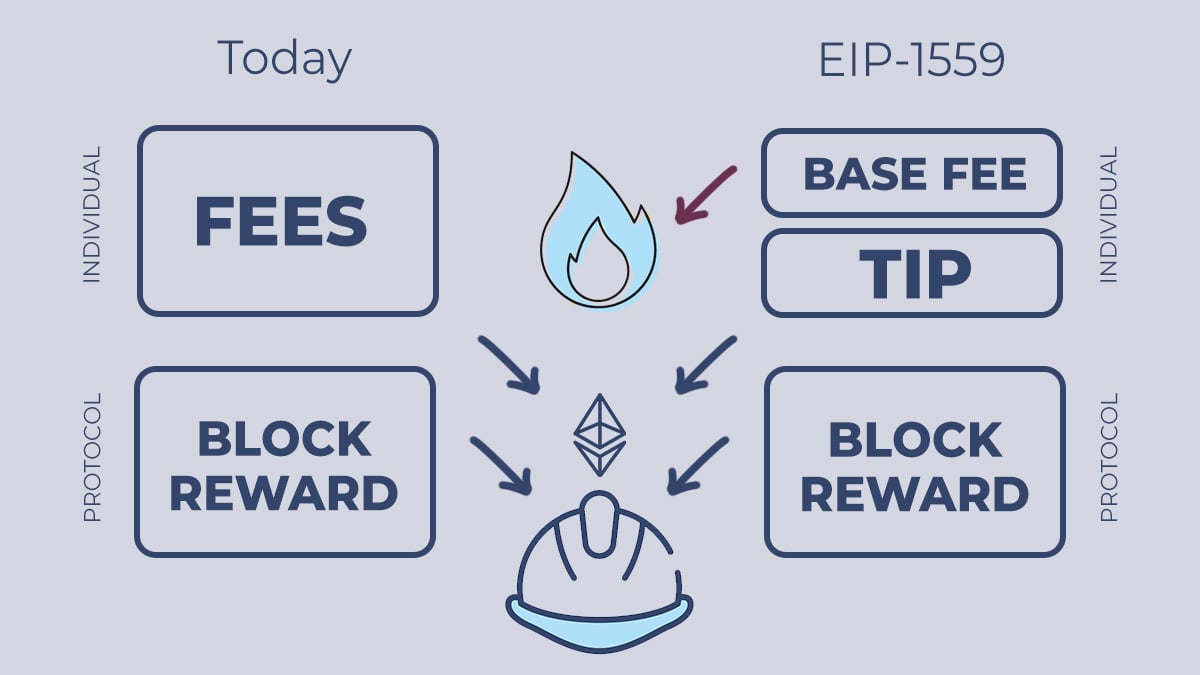 This means that the conversion on Uniswap (UNI) can cost $150-$160, making it unusable. Ether miners were the main beneficiaries of this status quo, while Ethereum (ETH) users and dApps devs were forced to migrate to Binance Smart Chain (BSC) or Polygon (MATIC). In addition to transactional fees from users, miners are rewarded with periodic “block rewards” (newly mined Ethers) hard-coded into the codebase of the Ethereum (ETH) protocol.

With EIP-1559, the structure of transactional fees is divided into “basic fee” and “tips.” The basic fee is obligatory, while tips can be transferred to incentivize miners to include this or that transaction in the new block as soon as possible.

But the most exciting part about EIP-1559 is the concept of “fee burning.” Periodically, all of the base fees collected from Ether users and dApps will be destroyed (“burnt”), i.e., permanently excluded from the circulating supply. Block rewards will be left unchanged.

EIP-1559 is heavily overhyped due to the heated debate its implementation was surrounded by. Mostly, it was opposed by miners who predicted the rapid decrease of their income. Poolin and Bitfly were the top Ethereum (ETH) mining entities that launched the promo campaign to prevent EIP-1559 from being included into the hardforks. At the same time, F2Pool was the largest mining pool that supported the upgrade.

However, the implementation of EIP-1559 will make Ethereum (ETH) fee markets far more predictable. Long story short, this will help Ethereum (ETH) users and dApps not to overpay for the utilization of Ethereum’s mainnet.

The activation of Ethereum’s London hardfork is accompanied by an unparalleled amount of misinformation spread around on Crypto Twitter. Below are only three of the most common misperceptions about  Ethereum hardfork London and its core update EIP-1559.

Typically, crypto community members expect Ethereum (ETH) to become a deflationary asset after the inception of periodic fee-destroying events. Meanwhile, this will be true only if (or when) Ethereum’s base fees in the post-London model will be lower than the amount of ETH “burnings.”

According to the latest research, the Ethereum (ETH) supply will start decreasing only in early Q1, 2022.

At the same time, as covered by U.Today previously, starting from December, 2021, Ethereum (ETH) mining itself may become unprofitable. Thus, it is not so easy to predict when Ethereum (ETH) will turn into a deflationary coin.

Ethereum fees will be reduced

As above, Ethereum (ETH) fees will not be reduced automatically: this reduction has never been the core rationale behind the development of EIP-1559. Instead, it will reduce the volatility of Ethereum (ETH) fee dynamics, making Ethereum (ETH) dApp tokenomics far more predictable.

This, in turn, will allow Ethereum (ETH) to prevent congestion from happening again and again.

EIP-1559’s impact will be devastating for miners

Ethereum (ETH) miners will see their revenue decreasing by 20-30 percent. This reduction looks sad, but it is far from dramatic.

First, the rebalanced post-London fee structure can bring in many dApps that migrated to other platforms. This will increase the utilization metrics of Ethereum (ETH) and, therefore, allow miners to raise more commissions.

Also, if the Ethereum (ETH) price increases (which is predicted by many supporters of EIP-1559), the USD-calculated revenue of miners will also surpass those of pre-London Ethereum (ETH).

Ethereum’s London and its flagship element EIP-1559 will introduce the entirely new Ethereum (ETH) to miners and users. At the same time, its influence should not be overestimated by both London’s enthusiasts and critics.