Ethereum Price Analysis from Twitter: From $145 to $200 and Higher? What’s the Chance of Ethereum Breaking Out?

Vera Yurina
Ethereum price predictions from Twitter: Can an ETH price of $145 be the sign of an uptrend? 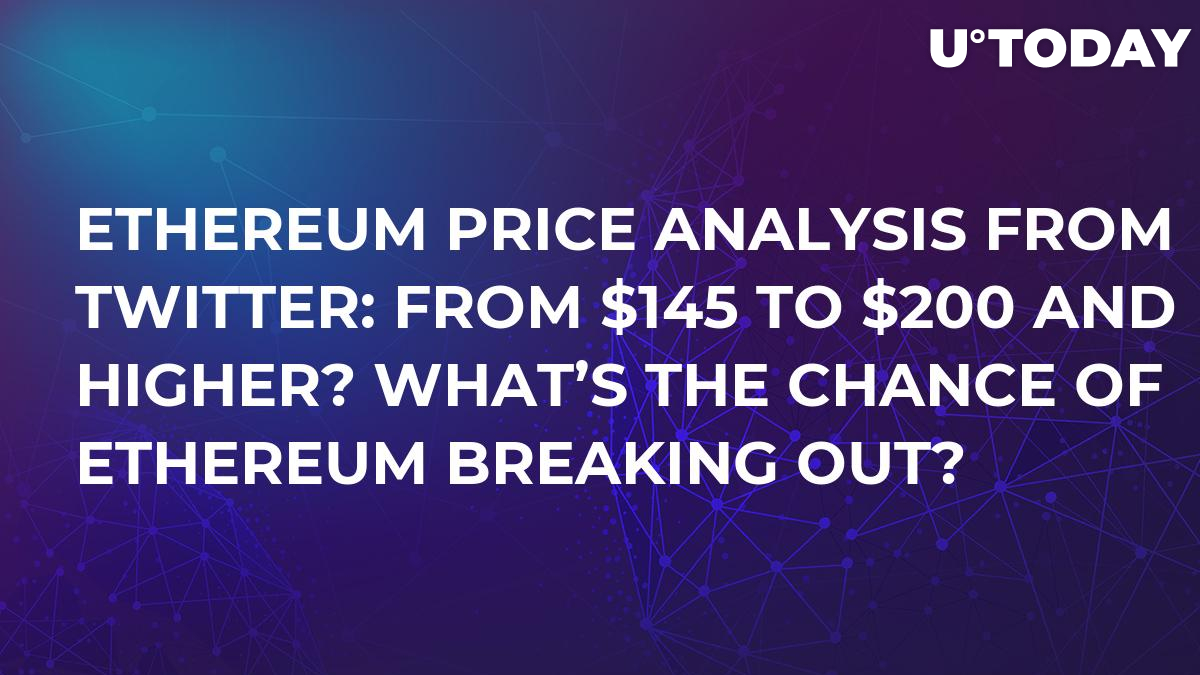 Ethereum is at the center of attention. There are a lot of things happening to ETH recently, but the best news is the uptrend which seems to have come. What do Twitter users think about it? Let’s trace the recent history of Ether and ETH price predictions in the latest tweets.

Starting from the middle of February, Ethereum began rising in price by 10%, step by step:

By February 21st, it has reached the $145 threshold. What’s going to happen next?

#ETH following same pattern. Short at 147. There could be some more upside possible, but not much. Targeting 125 before the last leg up pic.twitter.com/Yokftq4mJ1

It’s not surprising that crypto traders remain skeptic after a long bear market. Most of them are still afraid of serious fluctuations. However, some are quite optimistic:

#ETH/BTC APAC ?#Ether / #bitcoin pairing on the rise once more.

Green bar up on the AO with V-shaped bounce and a slight uptick in growing (bullish) volume.

Will have to keep rising in order to sustain current momentum.$ETH $BTC pic.twitter.com/KR26PLHs93

Doesn't have to be exact, just the right side of the trend. $ETH #ether #ethereum $BTCUSD $ETHUSD pic.twitter.com/ZlyxxdH7c8

Many are sure that Ethereum is back on track:

What will accelerate Ethereum’s growth? There are a lot of changes to come, including the release of Constantinople, the overall market uptrend, and other aspects:

#Bitcoin and #Ethereum set this year's liquidity record, but it seems there's much more to come. pic.twitter.com/X7E7WxwDfe

There’s a lot of fuss around Ethereum right now. For example, on February 21st, someone sold ETH for the highest fee in the history:

Have you heard of the recent ETH transaction?
Ethereum blockchain shows a transaction for 0.1 Ether, valued at approximately $14.80 at the time the transaction was sent by paying 2,100 ETH in fees! #ETHEREUM https://t.co/lsor9hSsHE pic.twitter.com/zAaEZZTSCe

Samsung has integrated an Ethereum wallet into its new S10 phone, which seems to be a considerable step towards massive adoption of the cryptocurrency:

@Samsung integrated an #ethereum cryptocurrency wallet into the new S10 phone today, exciting! Pitched this exact concept while I interned at @Samsung_RA last summer with my colleague, Zacky Jiang ?

Yet, not all top players believe in Ethereum’s potential. Look at what’s happened recently:

Saving this screen for when market cap of #ethereum overtakes the one of #GOOGL pic.twitter.com/Djqon4uNkU

Was Google right? Only time will show. We will continue watching Ethereum development trends.