Yuri Molchan
On Thursday, after the crypto market got relatively calmer, one may see that most top-10 coins have suffered only slightly, losing hardly over 3 percent overall 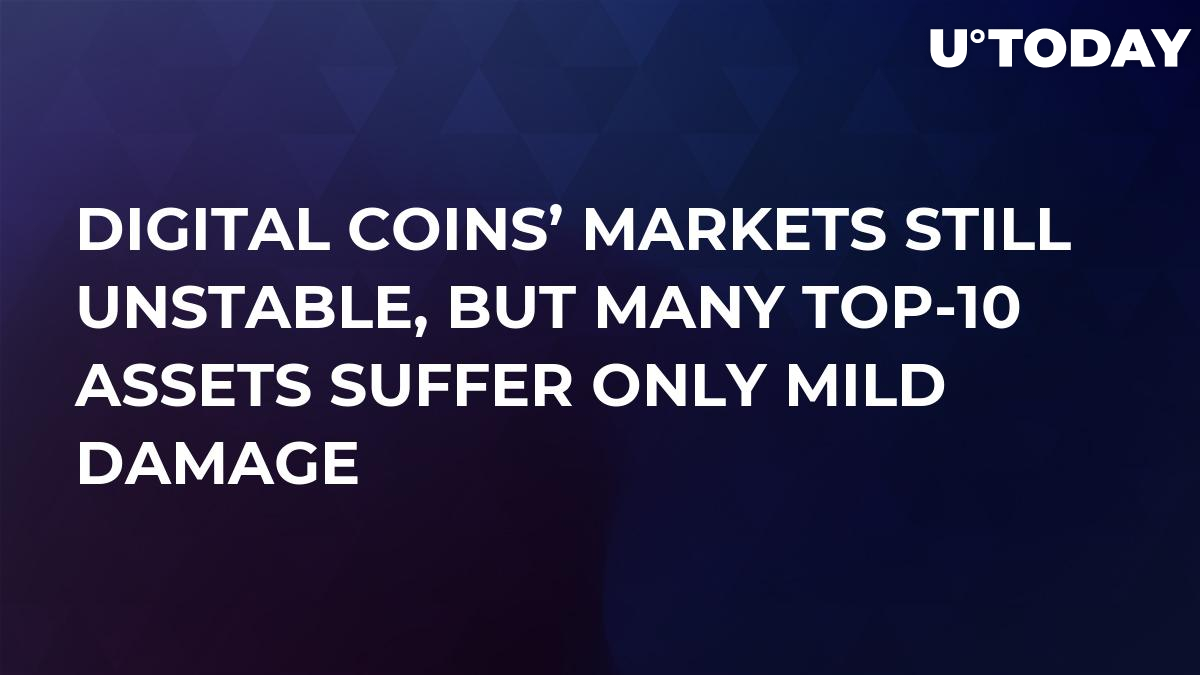 The turmoil is over for a while — however, a lot of the top-20 assets have shed only a little of their value, with some even having gone into the green.

During the week, BTC was nearly down 18 percent, its damage over the month totalling almost 30.6 percent, as per CoinMarketCap.

The second biggest (as of recently) virtual coin, XRP, lost 0.3 percent on Thursday, currently hovering at around $0.44 at the time of writing. Keeping its market share at the $17.6-bln mark, in comparison to Ethereum’s $13.6 bln, XRP is keeping its position, leaving ETH right behind it.

Over this week, XRP has overall lost 1.5 percent; its damage over the month has been near 3 percent.

Ether keeps losing its value, and today it has shaken off around 2.65 percent, currently trading at $131.79. Over the week, the coin has become nearly 23 percent ‘thinner’, losing around 36 percent altogether over this month.

The majority of the other coins from this list, as can be seen on CoinMarketCap, have declined by between less than 1 and slightly over 5 percent (BCH in particular). Bitcoin Cash (as CoinMarketCap is now referring to BCHABC chain) is now trading at $219 per unit. Over the past 30 days, it has suffered nearly 50-percent decline after its hard fork that took place on November 15.

Lately, it has been reported that US-based crypto exchange Coinbase is about to go through a hearing in court regarding alleged insider trading of BCH that took place last year, even though this case got dismissed last month.

Litecoin and Tether are showing a slight rise.

Other altcoins among top 20 assets

As for the virtual assets that are left and on the top-20 scale, some of them are in the red, some are in the green. The biggest gain has been shown by NEM — it has seen a nearly 5-percent rise, now trading at $0.08. The hardest damage has been done to Bitcoin Gold (- 4.30 percent), with the anonymous coin Zcash following it (-nearly 3 percent).

Presently, the total market cap of all crypto assets combined equals approximately $147 bln. Just three days ago, it was at a high of $187 bln.

A big venture capitalist has a say

Seeing the present situation in the market, a partner at CryptoOracle, a venture investment firm, on Wednesday recalled the fall of the dot-com bubble, comparing that chaos that took place back at the start of the 2000s with the current events in the crypto market.

The investor reminded crypto fans and investors that Amazon, which is presently one of the largest online companies, back then lost over 95 percent of its value just within two years. He also recalled that the current volatility is nothing compared to the roller-coaster BTC went through back in 2013.