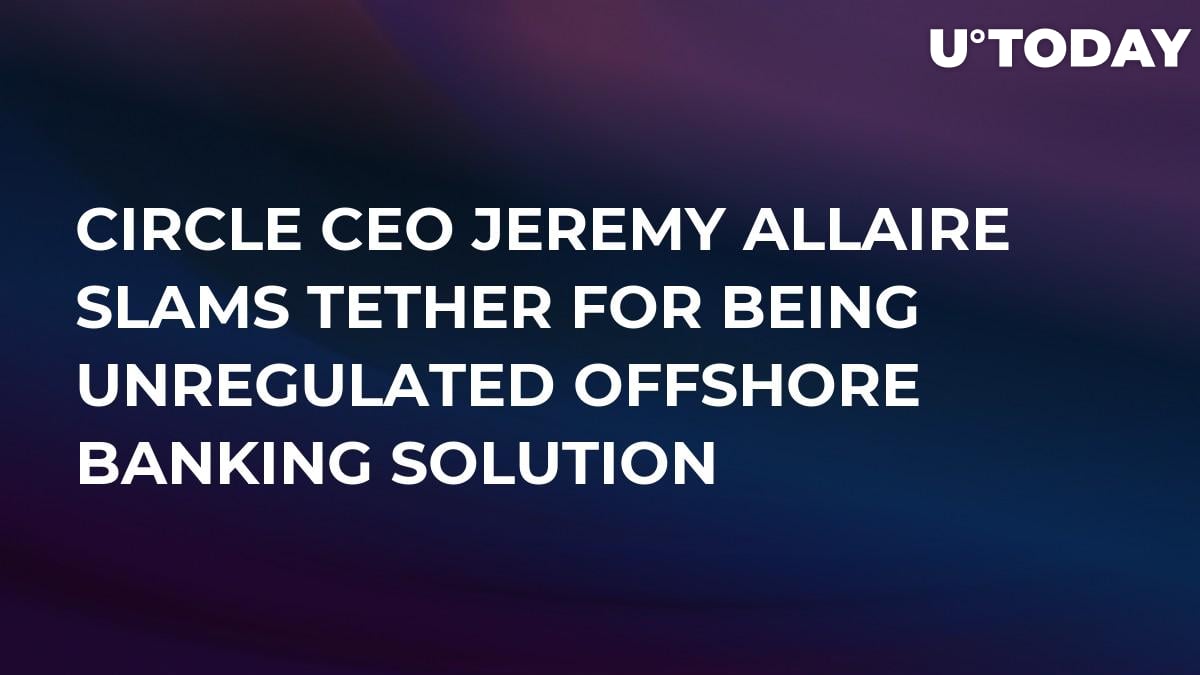 Jeremy Allaire, the CEO of Circle, has shared some scathing critique of Tether (USDT), the leading stablecoin in the cryptocurrency industry. In his latest tweet, he describes it as an unregulated offshore banking solution for China whose main selling point is its non-compliance.

(2/3) Meanwhile Tether continues to be largest stablecoin, offering an attractive option as an unregulated offshore USD shadow banking solution for China and Asia. It's greatest feature is its non-compliance and opacity.

Paolo Ardoino has responded to Allaire's criticism, claiming that Tether's greatest feature is, in fact, the ability to listen to its customers, adding that things didn't look good for Circle's USDC.

Its great feature is the ability of @Tether_to management of creating visionary products and listen to customers. Tether understands the needs of #crypto since 2014.
Also Asia is an important market, so you shouldn't generalize. Does not look good for USDc.

At the same time, Allaire touted the success of the USDC stablecoin that was launched by Circle and Coinbase back in 2018. USDC is already among the 22nd biggest cryptocurrency with its market cap reaching $520 mln, leaving its closest rival Paxos Standard (PAX) far behind it. The latter had a hard time increasing its circulating supply throughout the year.

As reported by U.Today, Blockchain Capital predicted that the USDC could grow by about 300 percent in terms of market capitalization and trading volume, thus becoming one of the biggest winners of 2020.

Gemini's GUSD and Binance's BUSD stablecoins are unlikely to see this kind of success this since, according to Allaire, they were already dead on arrival.

USDC stands out as a regulated version of Tether that is fully backed by fiat and audited on a monthly basis. For comparison, Tether only 74 percent of all USDT tokens are actually pegged to the US Dollar. On top of that, the leading stablecoin issuer, along with its affiliate exchange Bitfinex, has faced numerous controversies linked to Bitcoin price manipulations and their $850 mln cover-up.

That said, USDC has a major downside that stems from its regulatory compliance  — lack of fungibility. Since the likes of USDC and GUSD are dependent on tight banking relationships, they have a backdoor system that allows blacklisting any suspicious transactions.