Darryn Pollock
If Bitcoin hadn’t gone viral, it would never have taken off, but it also may have had a steady foundation and a clear direction 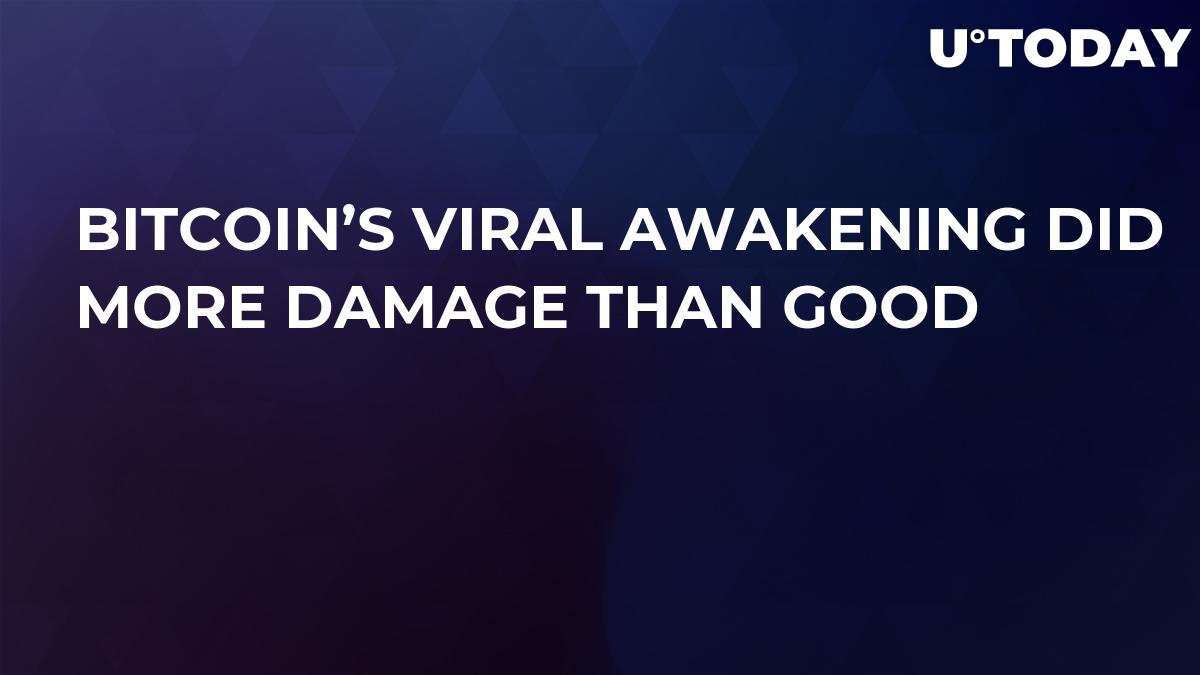 When Bitcoin was really no more than a play thing for the dark web, and it was mostly discussed in forums rather than on CNBC and Forbes, it had dreams of being a revolutionary electronic cash system.

However, when the revolution came, not many would have pictured it playing out as it has done. To its high point in December 2017, when it was totally viral and on everybody’s bios, it has now dipped down to being spoken in the mainstream as more of a fad.

However, there is still a push from those who have a keen interest in Blockchain, as well as cryptocurrencies. But it all could have been so much better- maybe not bigger, or as fast, but better. Bitcoin’s viral phase is a double-edged sword.

It has allowed the cryptocurrency to get a real global foot in the door, and bring with it a keen interest in the power of Blockchain, but it has also built up an unsteady tower full of get-rich-quick wannabes and scam artists.

What Bitcoin is today

Bitcoin has, today, become slightly directionless in its determination. It was at its height seen as the ultimate asset, a digital gold; it was climbing in price like no asset ever seen before, and it could be bought and sold from a smartphone.

However, it was designed to be digital cash, not digital gold. But because of its popularity, the Bitcoin Blockchain was overloaded and to that end, it became expense to transact with, slow, as well as not worthwhile as it was steadily gaining value.

Today Bitcoin has shed all its major scaling issues from its peak of popularity, yet that does not mean it has turned back into a functioning digital currency. It is still mostly seen as an asset, because people believe it can reach new heights again, but for those who don’t believe, it looks like a bust.

Bitcoin attracted a massive new market when it started breaking into the mainstream; stories of 1,000 times growth saw people flooding into the market with very little care or understanding of how things worked.

This influx of people who were happy to throw money at anything with the hopes it would ‘do a Bitcoin’ saw a lot of scammers and improper players also enter and pollute the market. Thus, Bitcoin today has been propped up on unsteady stilts with a lot of its new investors leaving as quickly as they arrived. And still, the scammers remain hoping to catch their quick buck.

What Bitcoin could have been

Had Bitcoin not gone viral though, things would have been very different. There is no doubting that the cryptocurrency would probably still be very niche and unknown in most realms, but, its technology rather than its hype would have been chugging it along in terms of growth and adoption.

Blockchain technology is the key to Bitcoin and the entire ecosystem, and that is also evident today in the less hyped world where its adoption is being fueled by institutionalized entities with care and patience.

If Bitcoin had stayed under the radar, there is very little doubt that Blockchain would not be brushed aside. The technology is good enough to peak the interest of institutions and it would have led to a slow and steady growth. Had Blockchain led Bitcoin, there is also more chance it would be in mainstream use today.

Bitcoin’s rush to the top also saw it leave regulators behind, spawning an ICO movement that was too quick to be regulated. Now, regulators have caught up and are handbraking all the growth as they work through it to make sure it fits in.

Had Blockchain been ahead, and cryptocurrencies followed, regulators could have kept up and molded a working and functional Bitcoin devoid from issues and scams.