What is Holding the SEC Back From Pulling the ETF Trigger?

Darryn Pollock
Regulators have always been slow and cautious beasts, but what is the real reason behind the Bitcoin ETF hold up? 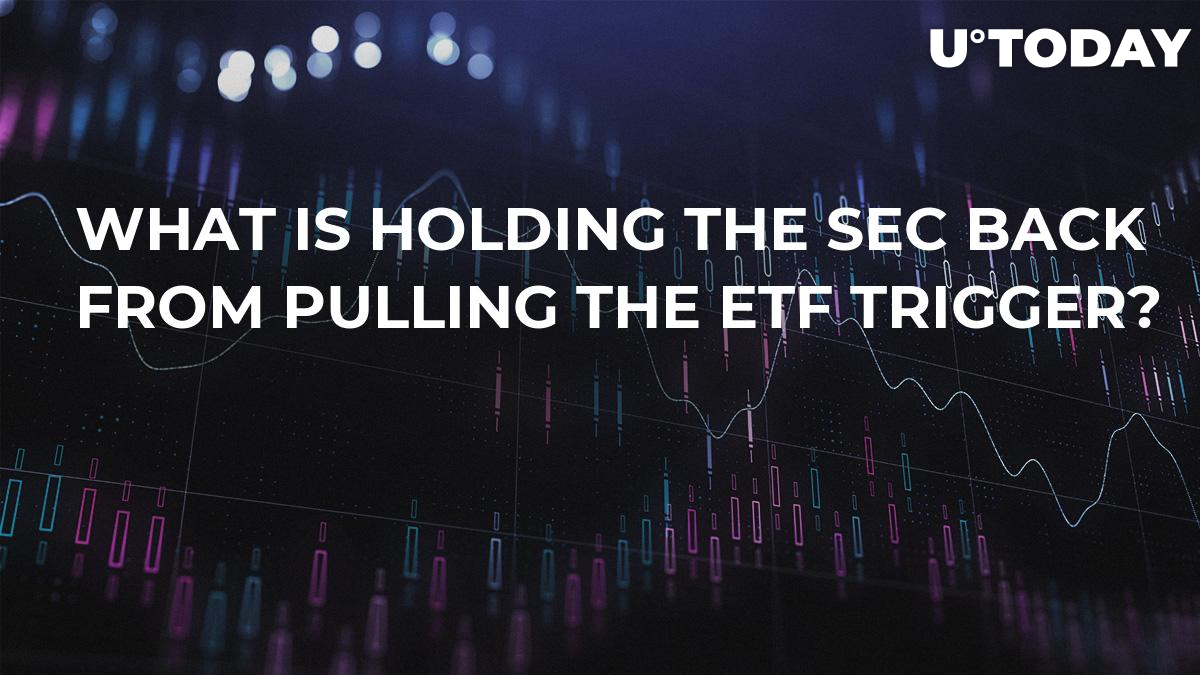 Even since before the SEC made its move to allow companies like CBOE and CME to offer Bitcoin futures, there has been increased interest and pressure for other forms of institutionalized products to be linked to Bitcoin. The biggest in the recent months has been a push by a number of firms for Bitcoin ETFs.

However, the SEC has been very cautious in its approach to approving this, it has denied a number of applications already, delayed some others, and is still scrutinizing many others that await its decision.

There is a good reason for the SEC being so cautious, as this is still a highly unregulated space, that is still very nascent and fresh, so the need for a regulator to take care is important, but is the SEC’s process overly cautious?

While there has been a big push for ETFs in the past few months, and many are hanging their hat on them for the sake of an explosion in the Bitcoin market, the SEC has seen a Bitcoin ETF application before and turned it down.

The Winklevoss Twins, famous for their belief in cryptocurrency and their exchange, Gemini, made an application in 2017 to the SEC for a Bitcoin ETF that was quickly turned down. They again tried in 2018, with the same result.

But their ETF application is not the only one that has been turned down, in act,  a bunch of at least nine were denied by the SEC in August while one of the more promising one, by VanEck, has been delayed.

Still, there are a few left that the SEC needs to make a decision on, and the feeling is, if they approve one, it will be monumental for Bitcoin and help the asset skyrocket again.

So, while the cryptocurrency and investment world waits with bated breath, what is the SEC thinking when it comes up against these applications?

The denial of nine ETFs in August, was actually a long and drawn out process, involving a rule change too. It took several months just for the SEC to begin its typical process for evaluating rule changes. After a required comment period, the agency gave itself one more two-month extension, which led to the final decision in August.

In its order, the SEC tried to make it clear that the agency hadn't looked at the validity of bitcoin itself. In the words of the commission, the "disapproval does not rest on an evaluation of whether Bitcoin or Blockchain technology more generally, has utility or value as an innovation or investment."

So, the SEC is not that concerned about Bitcoin and blockchain in its purest sense, but rather concerned about the cryptocurrency market because of the threat of fraud and manipulation in this nascent space.

The SEC has even rejected the idea of using the newly formed Bitcoin futures market as a yardstick to measure the success that an institutionalized investment tool would have in this precedent-breaking market.

Waiting for a strong market

Much like many arguments when it comes to Bitcoin and the related Blockchain space, it is not the technology or the cryptocurrency that is the problem, it is the way that it is used, perceived, or manipulated.

Many have made the argument that Bitcoin is a problem because it is used to buy drugs- that is a poor argument as the problem does not lie with Bitcoin, but how people use it.

The same applied for the SEC, they have stated they are not criticising the asset, rather the emerging market around it- which has been subject to many hacks, scams, manipulation and other such teething problems.

Perhaps, once the market matures a bit, and the problems abate and fall away, the time will be right for the regulator's rubber stamp of approval.